Somerscales was born in Kingston upon Hull to an English captain. Even in his early youth he drew a lot.

In 1863 he was hired as a teacher in the Royal Navy of England on the training ship Cumberland . In the following five years he served in the same function on four other warships , most recently on the HMS Zealous .

In the summer of 1869 he fell ill with malaria in Panama . He had to leave his ship in Valparaíso ( Chile ) and was discharged from the British Navy due to the severity of his illness.

During his stay in Chile he devoted himself intensively to painting in addition to his work as a teacher. He made a variety of landscape paintings. He exhibited three of these pictures at the international art exhibition in Santiago de Chile in 1872 and won a silver medal. 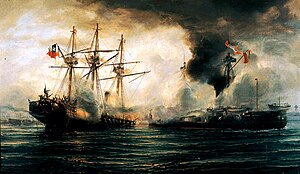 In 1875, Somerscales saw on the Chilean corvette Esmeralda how the ship fought for several hours against the sea during a severe storm off Valparaíso . Somerscales was so impressed by this experience that from then on he mainly made paintings of ships. 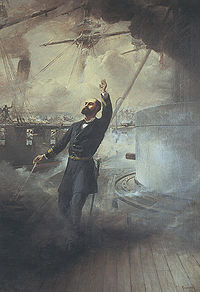 In particular, he made a myriad of paintings depicting naval battle scenes from the saltpeter war between Peru and Chile . A painting that shows the sinking of the Esmeralda by the Peruvian ramming monitor Huáscar during the naval battle off Iquique on May 21, 1879 became particularly famous . After the Saltpeter War, Somerscales focused on scenes from the merchant shipping off the coast of South America .

In 1892 Somerscales returned to England and a year later exhibited a picture for the first time in the Royal Academy in London . By 1928, a total of 28 Somerscales paintings had the honor of being presented in this prestigious location. In 1899 he painted one of his most famous works, which in turn had a Chilean motif as its theme: "Off Valparaíso". In 1903, 1907, 1909 and 1912 he made further trips to Chile until he finally returned to England in 1915.

His paintings can now be viewed in particular in the Tate Gallery , the National Maritime Museum in Greenwich , the Ferens Art Gallery in Kingston upon Hull and the Museum of Fine Arts ( Museo de Bellas Artes ) in Santiago de Chile.