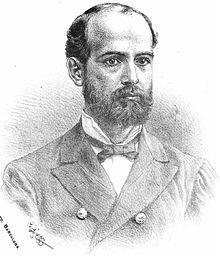 Arturo Prat Chacón (born April 4, 1848 at the Hacienda de Puñual near Ninhue, which has now been converted into a museum, in the province of Ñuble on the Bío Bío River ; † May 21, 1879 in Iquique , Peru , on board the Huáscar ) was a Chilean Frigate captain and naval hero. In the civil profession he was a lawyer . He took part in the Spanish-South American War in the naval battles of Papudo (1865) north of Valparaíso and Abtao (1866) off the island of Chiloé against the Spanish fleet.

In the saltpeter war of 1879, immediately before the naval battle of Iquique, he took command of the outdated corvette Esmeralda and led the blockade of the then Peruvian port of Iquique . The Esmeralda was rammed and sunk by the Peruvian ramming monitor Huáscar under the command of Rear Admiral Miguel Grau Seminario during the nearly four-hour battle . Prat had previously fallen in the unsuccessful attempt to board the Huáscar .

A few weeks after the fight, Admiral Grau sent the fallen Arturo Prat's sword along with a letter of condolence to his widow, praising the courage and bravery of his opponent with appreciative words and expressing his regret about the horrors of the war. Prat's widow then called Grau a knight of the seas , an honorary designation that is still used today for Prat and Grau.

Prat's death played a major role in the further course of the war. Although Prat was not involved in the fighting that created the actual conditions for the victory of Chile, namely in the battles of Punta Gruesa a few hours after his death (sinking of the Peruvian frigate Independencia ) and of Angamos six months later (conquest of the Huáscar ), the battle of Iquique, in which he was killed, is considered by the public to be the decisive turning point of the war. Numerous public squares, streets and other facilities in Chile are named after Prat. In addition, the 10,000 peso note bears Prat's face. The Arturo Prat scientific research station in the Chilean Antarctic Territory also bears his name. The anniversary of his death is celebrated with a memorial ceremony in Chile and the president makes his annual report to the nation in front of parliament.

Prat and Grau, whose lives show certain parallels and who fought side by side at Abtao against the Spanish fleet 13 years before Iquique, are in their respective countries as symbols of chivalry , patriotic sacrifice and nobility.