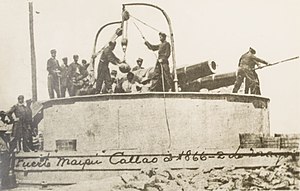 Peruvian battery in the Battle of Callao, 1866

The Spanish ironclad Numancia in the port of Callao

The Spanish-South American War was a military conflict between Spain on the one hand and Chile and Peru on the other, which was joined by Bolivia and Ecuador , from 1864 to 1866 .

In Spanish-Latin American historiography, this war was first referred to as the Pacific War , before this name was adopted for the later Saltpeter War and since the Second World War it has also been used for the Pacific War of the 1940s.

In German the war was sometimes referred to as the guano war , a term that was later also used for the saltpeter war. The term "Spanish-South American War" only became familiar through the more recent specialist literature.

The Spanish Queen Isabella II sent a scientific expedition to South America at the end of 1862 under the command of Admiral Luis Trasero Hernández Pinzón . On April 18, 1863, she reached the port of Valparaíso , where she was warmly received before continuing to Peru. However, Spanish foreign policy at this time was not only characterized by scientific and peaceful missions; Madrid had intervened in Mexico and Santo Domingo since 1861 and had reappeared as a great power in the shadow of the US civil war .

Occupation of the Chincha Islands

After the talks were unsuccessful, the Spanish fleet blocked the Peruvian port of Callao on April 14, 1864 , while Spanish troops occupied the Chincha Islands . Most of Peru's guano exports collapsed and the Peruvian economy suffered severe damage.

In the port of Valparaíso there were conflicts between Spaniards and Chileans, as Chile showed solidarity with Peru.

Declaration of war by Chile

On November 8, 1865, the Peruvian President Juan Antonio Pezet handed over his office to the Vice President Pedro Diez Canseco . On November 26, 1865, General Mariano Ignacio Prado took office; he declared his solidarity with Chile.

On November 26, 1865, there was a naval battle at Papudo north of Valparaíso. The Chilean captain Juan Williams Rebolledo was able to board the Spanish ship Virgen de Covadonga and capture the crew. The damaged ship was brought to a Chilean port.

On December 5, 1865, Peru and Chile allied themselves. In January 1866, Ecuador joined the alliance between Peru and Chile , and in February Bolivia too . 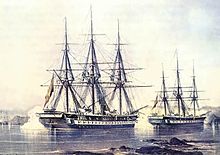 On February 7, 1866 there was a sea battle north of the island of Chiloé (English Battle of Abtao ) between two Spanish frigates on one side and three Peruvian ships (the frigate Apurímac , the corvette Unión and the corvette América ) and the Chilean schooner Covadonga on the other side. The Peruvian frigate Amazonas ran onto a rock on the way to Abtao and sank. The Spanish ships were hit by 14 projectiles during the two-hour battle; but these caused hardly any damage. The Spanish fire was a little more effective; u. a. the Apurímac received three hits at the waterline.

In March 1866 the Spanish fleet approached the Chilean port city of Valparaiso. This was an important international trading city as it was the first major city ships reached after circumnavigating Cape Horn . A number of American and British ships were also lying here, threatening the Spanish fleet with a naval battle if they bombard the undefended city. Spanish Admiral Casto Méndez Núñez gave the city a four-day ultimatum to surrender. This was refused by the city and, trusting the English and American ships in the port, no defense efforts were made.

On March 31, 1866, the unfortified city of Valparaíso was bombed by the Spanish fleet. The frigates Numancia , Blanca , Villa Madrid , Resolución and Vencedora shelled the city for around six hours, firing around 2,600 shells. The city was badly damaged. Because of the warning time, there were only five dead and a few injured. The bombing was sharply criticized internationally. For example, in the British House of Commons, the bombardment of the city was called a crime against humanity.

On May 2, 1866, Admiral Méndez Núñez decided to bombard the Peruvian port city of Callao . However, this was well equipped with 96 cannons. The Spaniards lost 200 dead and wounded, and most of their ships were damaged. The Peruvian casualties amounted to 300 men, most of them in a shooting accident. The Peruvian Defense Minister José Gálvez Egúsquiza also died in the shelling.

After the shelling of Callao, the active hostilities ended and the Spanish fleet withdrew to the Philippines .

Although an armistice had been agreed in 1867, peace treaties were not signed in Washington until 1871 . Spain did not ratify it until 1879, Chile only signed it in 1883.