The title of this article is ambiguous. Further meanings are listed under Callao (disambiguation) .

Administrative division of the Callao region

Although Callao forms an urban unit with Lima , it is politically a separate region of Peru. Administratively, the Callao region consists of the Callao Province ( Provincia constitucional del Callao ).

The seven districts (distritos) of the Callao region (numbering according to the map):

There are several uninhabited islands off the coast, La Isla San Lorenzo , Isla El Frontón , Islas Cavinzas and Islas Palomino . Tours lead to the latter two islands. They are home to sea ​​lions - around 8000 as well as around 160 Humboldt penguins and sea birds.

Callao was founded by Francisco Pizarro on Callao Bay in 1537 and quickly became the most important port for Spanish trade on the Pacific. During the time of the viceroyalty , many goods from the areas of Peru , Bolivia and Argentina were brought by mule across the Andes and shipped via the port of Callao to Panama , where they came by land to the Caribbean Sea and from there across the Atlantic Were shipped to Spain.

In the 16th century, the port was the starting point for many Spanish expeditions to the Pacific, but was also attacked several times by various English and Dutch privateers , including Francis Drake , Tom Cavendish , Jorg Spitberg and Jacob Clerk . On October 28, 1746, a severe earthquake and a tsunami caused by it devastated the port and city, killing an estimated 5000 people, only 200 inhabitants survived the natural disaster.

The viceroy José Manso de Velasco had the city rebuilt and at the same time a fortress ( Fortaleza de Real Felipe ) built, which stands on the coast above the port to protect it.

Callao was hotly contested during the South American Wars of Liberation against Spain . In September 1823, Simón Bolívar and Antonio Sucre landed with a Greater Colombian army in Callao to come to the aid of the beleaguered Peruvian Republic. After the surrender of the Spanish viceroy José de la Serna after the battle of Ayacucho on December 9, 1824, the Spanish brigadier Rodil locked himself in with remnants of the Spanish troops in Fort Real Felipe and refused to surrender. The fortress in Callao Bay was the last Spanish bastion on the South American continent. The siege, full of privation, lasted almost 14 months. Since, contrary to Rodil's initial hopes, no further reinforcements arrived from Spain, the last 400 soldiers loyal to the king had to surrender to the republican besiegers on January 22, 1826. This ended the Spanish presence in South America.

In 1851 the first railway line was built in South America between Callao and Lima.

The Spanish tank frigate Numancia 1865 in the port of Callao

Before the Spanish-South American War (1865–1871), the Spanish fleet blocked the port of Callao from April 14, 1864, which brought Peruvian guano exports to a standstill. Peru joined Chile on December 5, 1865, which had already declared war on Spain a few months earlier. On May 2, 1866, the Spanish admiral Méndez Núñez decided to bombard Callao. The city was able to defend itself well thanks to 96 cannons, so that the Spanish had to complain about many dead and damaged ships. After the shelling, in which the Peruvian Defense Minister also died, the active hostilities ended and the Spanish fleet withdrew to the Philippines .

On April 28, 1947, Thor Heyerdahl started his first expedition with the Kon-Tiki from Callao .

Located on the coast is the Colegio Militar Leoncio Prado , a Peruvian military school that also played a major role in the novel La Ciudad y los Perros (1962, German The City and the Dogs ) by the Peruvian writer Mario Vargas Llosa .

Today Callao houses a military prison of the Peruvian Navy , in which, among others, the leader of the rebel group Sendero Luminoso Abimael Guzmán , the leader of the MRTA Victor Polay and the former head of the security service under President Alberto Fujimori Vladimiro Montesinos , who was convicted of corruption, are imprisoned.

In 1966 the Callao National Technical University was established.

In April 1967 the Roman Catholic diocese of Callao was founded by Pope Paul VI. built.

Among other things, petrochemical products, fertilizers, textiles and leather goods are produced in the city.

Callaos Port is one of the most important fishing and trading ports in South America and handles 75% of Peru's imports and exports. It also has extensive cold store capacities and several dry docks. The realization of the San Lorenzo Hub Port would further strengthen Callao's economy. 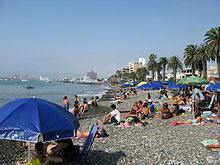