Miguel Grau Seminario (born July 27, 1834 in Piura , Peru , † October 8, 1879 aboard the Huáscar in the battle of Angamos , Bolivia ) was a Peruvian admiral and is now considered a Peruvian national hero . 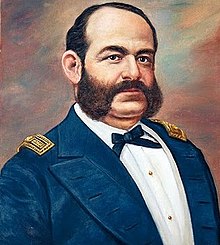 Miguel Grau was born in Piura on July 27, 1834, the son of Juan Manuel Grau y Berrío, a lieutenant colonel in the army of Greater Colombia , and María Luisa Seminario y del Castillo.

At the age of 10, Miguel Grau was hired on a merchant ship . After a brief training period at the Naval Academy of Callao , he was an ensign in the Peruvian Navy .

In 1856 he joined the uprising against President Ramón Castilla . In 1858 he worked again in the merchant navy . After he rejoined the Peruvian Navy in 1860, he was given command of the Lersundi in 1865 . At that time he had the rank of sea ​​captain .

In 1866 John Randolph Tucker was appointed fleet commander by the Peruvian government. Miguel Grau protested against this decision with some of his comrades and was imprisoned on the island of San Lorenzo in August 1866 . In February 1867, Miguel Grau was released from prison.

In 1875, Miguel Grau became a member of the Peruvian Congress . He was also the director of the Callao Naval School.

1879 Miguel took Gray in a controlling function on the saltpeter part and directed the operations of the Peruvian Navy , where he first the rank of rear admiral held and then the Admiral was promoted. During the war he earned the honorary title "Knight of the Seas" ( Caballero de los Mares ) in South America .

During the naval battles at Iquique and Punta Gruesa on May 21, 1879, in which the Huáscar and the Peruvian ironclad Independencia were involved, he rammed the Chilean corvette Esmeralda with the iron ram of his ramming monitor and sank her. In the battle for the Esmeralda , the ship's commander, the Chilean national hero Arturo Prat , and another 139 Chilean sailors were killed (on the other hand, only one sailor was killed by the Huáscar ). Before Miguel Grau continued the fight, he gave the order to rescue the 62 surviving Chilean sailors, including Lieutenant Luis Uribe Orrego, the last commander of the Esmeralda .

At the time the Esmeralda was sunk , the sea battle had already lasted three and a half hours. The scene of the sinking of the Esmeralda by the Huáscar has been immortalized on a painting by the British artist Thomas Somerscales .

After the Chilean sailors of the Esmeralda had been taken aboard the Huáscar , Admiral Grau took up the pursuit of the fled Chilean gunboat Covadonga , which he encountered in combat with the heavily damaged Independencia, which was set on fire by its own crew . So he had to save the surviving team of the sinking Independencia . After this he reached a Chilean convoy to the soldiers , ammunition and other material to Antofagasta should bring. The Chileans had to end the sea ​​blockade of the then still Peruvian city of Iquique and withdraw with their ships to Valparaíso .

Five days after this battle, Admiral Miguel Grau attacked the port of Antofagasta with the Huáscar , destroyed the artillery positions there and captured two Chilean merchant ships at Cobija the next day .

A few weeks after the fight, Admiral Grau sent the fallen Arturo Prat's sword along with a letter of condolence to his widow, praising the courage and bravery of his opponent with appreciative words and expressing his regret about the horrors of the war. Prat's widow then called Grau a knight of the seas , a designation that was imprinted on the public consciousness, especially after Grau's death.

In the following period, Admiral Miguel Grau and the Huáscar captured the Chilean transport ship Rímac , which had 300 soldiers, horses and military equipment on board, and sank another 16 Chilean supply ships. The ports of Cobija , Tocopilla , Platillos and Mejillones, Huanillos , Punta de Lobo , Chañaral , Huasco , Caldera , Coquimbo and Taltal were also shot at by the Huáscar .

The constant attacks by Admiral Miguel Grau hit the Chileans and prevented the land war from continuing. The Chilean Navy then began a relentless hunt for Miguel Grau. In terms of propaganda, this hunt was justified in retaliation for Arturo Prat's death.

On October 8, 1879, under Admiral Grau , the Huáscar was captured and boarded by six Chilean ships in the naval battle of Angamos . At the very beginning of the battle Admiral Grau and Lieutenant Diego Ferré were by a grenade hit on the bridge were killed. The Chileans captured the Huáscar and then used them against the Peruvians; it can be viewed today in the Chilean port city of Talcahuano .

Miguel Grau was posthumously awarded the rank of Grand Admiral (Gran Almirante del Perú) by the Peruvian Congress in 1967 . On March 21, 1958, the remains of Miguel Grau were returned to Peru from Chile. Several ships of the Peruvian Navy , including the current flagship BAP Almirante Grau , were named after Miguel Grau. The most important football stadiums in Callao and Piura are also named after Miguel Grau. In 2000, Grau was named “Peruvian of the Millennium”. Grau, who was a member of the Peruvian Congress until his death, is commemorated at the beginning of every plenary session to this day. Before the start of the debate, his name is called and all congressmen respond, “Present!”.

Prat and Grau, whose lives show certain parallels and who fought side by side in the Spanish-South American war against the Spanish fleet 13 years before their death , are in their respective countries as symbols of chivalry , patriotic sacrifice and nobility.