from Wikipedia, the free encyclopedia
Battle of Angamos
Part of: Saltpeter War 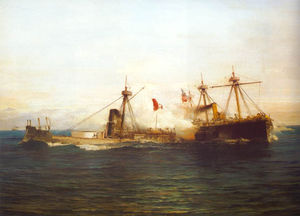 The Huáscar (painting by Thomas Somerscales )

The naval battle of Angamos took place on October 8, 1879 in the saltpeter war between the Peruvian ironclad Huáscar and six Chilean warships near Cape Angamos ( Punta Angamos ). During the battle, the Peruvian admiral and today's Peruvian national hero Miguel Grau Seminario was killed.

After the naval battles at Iquique and Punta Gruesa on May 21, 1879, the Huáscar was the last major warship that the Peruvian Navy had left, and thus represented the last obstacle for the Chilean Navy in gaining naval supremacy off the Pacific coast of South America .

The Huáscar managed to disrupt Chilean supply lines significantly over the next six months by attacking Chilean ships and ports. This also prevented an invasion of Chilean troops on Peruvian territory. The capture of the transport ship Rímac on July 23, 1879, which was en route to Antofagasta with 300 soldiers, horses, ammunition and military equipment , caused great excitement in the Chilean public and led to the resignation of the commander-in-chief of the navy, Rear Admiral Juan Williams Rebolledo .

The Chilean government then dispatched the newly appointed Chilean fleet commander, sea ​​captain José Galvarino Riveros Cárdenas, and frigate captain Juan José Latorre Benavente with six warships to hunt the Huáscar and its commander Admiral Miguel Grau Seminario. This operation was justified propagandistically with the desire to retaliate for the loss of the corvette Esmeralda near Iquique and the death of her commander Arturo Prat , who had become a national hero.

Captain Riveros had split his squadron into two groups. The first group under his own command included the following ships:

The ships of the second group under Frigate Captain Latorre were:

In the early morning of October 8, 1879, the Huáscar was together with the corvette Unión at the height of Antofagasta and was heading north when the columns of smoke of the second enemy group were sighted. Admiral Grau gave his two ships the command to move west and bypass the Chilean ships. Around 7.30 a.m., the columns of smoke of the first Chilean group were spotted further north. Admiral Grau ordered the Unión to dodge north, while he himself wanted to divert the Chilean ships with the Huáscar and headed a north-easterly course towards the coast.

Map of the battle

After a turning maneuver carried out northwest of Cape Angamos during the firefight, the fighting ships now moved in a westerly direction. Soon the Huáscar could no longer be maneuvered. A fire broke out on board. At around 10.30 a.m., the Huáscar received several hits at close range from the enemy ships that were immediately passing. Almost all Peruvian officers on the flagship had now been killed or wounded. The ship was listing badly and fires had broken out in several other places.

At around 10.50 a.m., the signal officer, First Lieutenant at Sea Pedro Gárezon Thomas , who was the last to take command of the Huáscar , gave the chief flight engineer the order to open the bulkheads in order to put the Huáscar aground so that it would not fall into enemy hands . Since the injured were initially to be evacuated from the rooms to be flooded, and due to technical problems that could be traced back to damage from the bombardment, the sinking was no longer successful in time. The ship was boarded at 11:10 a.m. by Chilean soldiers under the command of Lieutenant Juan T. Rogers and Lieutenant Juan Enrique Simpson, who forced the machinists at gunpoint to close the bulkheads again.

The surviving crew were captured and distributed to the Chilean ships. The Chilean sailors immediately set about putting out the fires and stopping the leaks. At Gárezon's request, he was given the opportunity to recover the remains of Admiral Graus before he was evacuated. The search for the dead commander on the largely destroyed ship lasted until 5 p.m. that afternoon, and ultimately only the right foot of the dead man could be identified and buried.

A total of 107 shells were fired at the Huáscar in the course of about an hour and a half . 33 Peruvian seamen (including the fleet commander Admiral Grau) died in the battle. 171 Peruvians, including 27 wounded, were taken prisoner. Eight Peruvians and one of the ten Chilean sailors wounded in action died shortly thereafter. 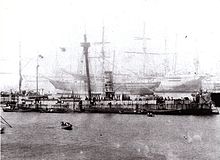 The Huáscar badly damaged in the Chilean port of Valparaíso

After the loss of the Huáscar , the Peruvians had nothing to oppose the Chilean fleet. The Chileans were able to carry out the invasion of Peru as planned and victoriously end the campaign. The Chilean fleet commander Riveros was promoted to rear admiral.

The heavily damaged Huáscar was dragged to Valparaíso by the Chileans and repaired. Then she was used under the command of the Swedish-born Chilean captain Manuel Thomson against Peru and blocked the port of Arica from November 1879 . There, on February 27, 1880, Captain Thomson was killed in a sea battle with the Peruvian monitor Manco Cápac . The blockade and the shelling of Arica, the last fortified port in Peruvian hands, continued until the storming of the city by land troops on June 7, 1880, with which the military actions of this phase of the war ended.