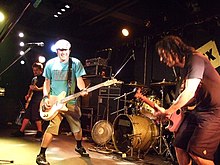 Skatepunk (also skatecore or skate thrash ) describes a part of the punk / hardcore scene that mainly deals with skateboarding .

Skatepunk is often viewed as a particular style of music and is equated by some with melodycore . In the 1990s, was also in the skater scene Grunge very popular since the late 90's was Metalcore more popular.

As early as the late 1970s, skating became popular as a recreational sport within the US punk scene, especially in California, while hardcore groups such as Aggression , which were not only active skaters , appeared in the California hardcore scene since the early 1980s but also incorporated skateboarding as a theme in their songs. The term "Skate Punk" was used, among other things, for the American band Suicidal Tendencies . The founders of the early skatepunk in the USA are primarily the bands Gang Green and JFA, or later the Canadian SNFU .

Melodycore groups like Pennywise , The Offspring and NOFX have shaped skatepunk since the late 1980s, and groups like Satanic Surfers , Lagwagon , Millencolin , Anti-Flag , Venerea and Guttermouth followed suit in the early 90s .

In Germany, skate punk became popular in the mid-80s through songs like My God Rides a Skateboard by the Spermbirds or Skate Tonight by Disaster Area . The band ZSK called their first demo MC Keep Skateboarding Punkrock and made a clear statement for the skate punk scene. Nowadays it is newer genre bands like Narcolaptic who, contrary to the pop-punk trend of the scene, are returning to the actual roots of skate punk .

Skatepunk means the connection of skate sport with the mindset and music of the punk / hardcore scene. Strong commercialization of skate sport is mostly rejected, skateboarding is seen as anti-sport, which is not a contradiction to skating, because although it is a physically demanding activity, it is mostly seen by those who do it as an identification with themselves. Thus, “skating” cannot be classified in the sport category. Most skatepunk groups are, although skate punk is mostly considered fun-oriented party music, more left-wing and sometimes (as in the case of Anti-Flag , NOFX or ZSK ) even very politically committed.

The most popular variety among skate punks is melodic hardcore , but classic punk rock is also increasingly being played. Well-known representatives of the English-speaking skate punk are McRad , Millencolin , Blink-182 , Lagwagon , The Offspring , Pennywise and NOFX . The best-known German band is probably ZSK , which also has German-language texts in their repertoire. Skate punks' lyrics are often about women, alcohol and partying. However, there are also some bands whose lyrics show political motivation. The same motivation is generally directed against neo-Nazis , capitalism , state surveillance and against police violence.