This article describes the Priwall peninsula at the Trave estuary. For the four-masted barque of the same name see Priwall (ship)

Sailing port with Passat and Travemuende old town (before 2017) 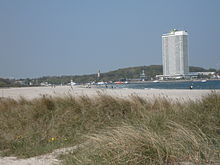 Priwall beach on the Bay of Lübeck, in the background the Maritim Hotel (before 2017).

The Priwall is an approximately three-kilometer-long peninsula at the mouth of the Trave in eastern Schleswig-Holstein . It has belonged to the Travemünde district of the Hanseatic city of Lübeck since 1226 .

The Priwall is very popular, especially in summer, because there is a wide sandy beach on the northeastern part of the peninsula for swimming in the Bay of Lübeck .

The peninsula is bordered in the north by the Baltic Sea , in the west by the Trave and in the south by the Pötenitzer Wiek , a haff-like extension in the Trave. The eastern end of the peninsula forms the state border with Mecklenburg-Western Pomerania . This limit goes back to the Lübeck Imperial Freedom Letter from 1226. The inner-German border ran here until 1990 , so that for many years the Priwall could not be reached on the 35 km long land route via Dassow around the Dassower See on the B 105 to Selmsdorf and Schlutup. 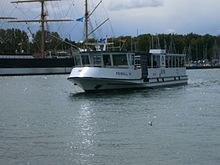 The Priwall ferry (car ferry) for vehicles and pedestrians connects Travemünde via the street Auf dem Baggersand with the Mecklenburg Landstraße on the Priwall. The Mecklenburger Landstrasse leads in a west-east direction across the Priwall to Mecklenburg.

Another ferry connection for pedestrians only runs in summer between the Travepromenade in Travemünde near Nordermole and the Dünenweg on the Priwall.

In 1226 the Priwall became part of the Lübeck city area ( Lübeck Imperial Freedom Letter ). In the same century, a stone dam was also built between the Priwall and the mainland to Mecklenburg, which indicates that the Priwall was originally an island in the Trave estuary. 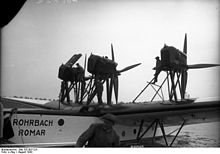 In 1803, Section 9 of the Reichsdeputationshauptschluss confirmed the Priwall as the exclusive property of the city of Lübeck ; Mecklenburg-Schwerin received the Lübeck hospital villages on Poel as compensation for old claims - against the public objection of the then owner of Johannstorf and Pötenitz , Michael Gottfried Eckermann. In 1847 a bathing establishment was set up on the Priwall. From 1880, the Priwall received simple accommodation for families in need, which the Association for Holiday Colonies built. From 1922 it was allowed to bathe in the Baltic Sea directly from the beach.

A racecourse was opened on August 5, 1882 and used until 1934. In 1940 it gave way to the construction of a submarine harbor, today's “Passathafen”, which is now used as a sailing boat harbor.

At the beginning of the 20th century, zeppelins landed and took off on the Priwall. B. in the International Baltic Sea Year 1931 the LZ 127 airship Graf Zeppelin . Since 1926 there has been a Lufthansa airfield on the Priwall for passenger traffic to domestic German destinations and to Scandinavia , which was also used by seaplanes.

The Caspar-Werke started building and testing seaplanes in 1914.

The Reichsluftwaffe claimed the site for themselves in 1935. There was regular service to the countries bordering the Baltic Sea. A narrow way of the old airport runway with concrete slabs runs on the Priwall at the end of the flight path .

During the Second World War, the Priwall was closed to civilians. In neighboring Pötenitz, you can still see the ruins of the Pötenitz Aircraft Office, overgrown by coastal forest, and the associated jetty in the Pötenitzer Wiek.

In the 1930s, a clinic was built on the Priwall, which was initially used by the military. Later, the Priwall hospital, which was used as a military hospital during the Second World War, had 124 beds and was taken over by the private Sana clinics in the last few years of operation. The clinic was closed in 2004 and was empty from September 2005. A practice clinic with a ward in Travemünde was created as a replacement. Until 2020, two of the buildings were used as external storage for more than 590,000 volumes of the Lübeck City Library . After the plan for a new knowledge store as a joint storage facility for Lübeck's city ​​library, archive and museums failed, a small solution is to move the city library's storage facility to a rented building on the site of the former Lübeck mechanical engineering company at Einsiedelstraße 6 in 2020 . The former clinic buildings are sold. Apartments are to be built on the site.

The runway of the airfield was destroyed by British bombers towards the end of the war. 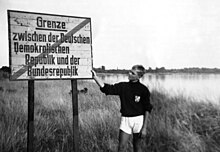 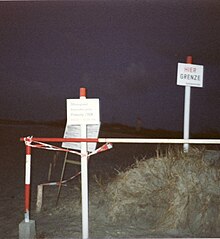 Until 1990 a small section of the Priwall belonged to the GDR . Its border with the Schleswig-Holstein Priwall formed the northernmost part of the inner-German border .

Between 2002 and 2007 the sand sculpture show Sand World was held on the Priwall .

The Priwall is the location of a seaman's school and the state vocational schools for boat builders, opticians, shoe technology / orthopedic shoe technology and glazing.

Rosenhof Travemünde is a senior citizens' residence on the Priwall in Travemünde. Seen from Travemünde.

On the Priwall there is a large senior residence, a holiday home complex and large sport boat and yacht harbors, which offer international flair, especially during the Travemuende Week . There is also a riding stables on the Priwall with an open stable and the opportunity to take riding lessons. There are also numerous private weekend houses here.

Part of the Priwall near the Passat's berth was redesigned. At the end of 2007, a seven-hectare part of the Priwall was sold to Waterfront-AG. This built houses and hotels along and staggered several times behind the waterline. The “Bürgerinitiative bewutsame Priwallentwicklung eV” turned against the building project. V. “In 2010 she presented an alternative concept with restricted development. In 2018, the 6.1 hectare Priwall Waterfront facility was under construction. From the end of 2019, the "Slow Down" conference center will be used as a hotel in summer and for conferences and congresses in winter.

A narrow way of the old airport runway with concrete slabs runs on the Priwall at the end of the flight path .

The Museum Ostseestation Priwall at the Priwallhafen shows animals from the jellyfish to the plaice living in the sea in several aquariums . There is also the poisonous weever to see. Using the shell of the mussel , it is shown that mussels in the salty North Sea grow larger than mussels in the Baltic Sea.

At the Trave you can also visit the four-masted barque Passat . This ship was a Flying P-Liner of the Hamburg shipping company F. Laeisz, which in 1920 named the Priwall , a similar ship, after the peninsula. The Priwall was interned in Valparaiso in 1941, then given away to the Chilean government, which used it as the Lautaro training ship ; In 1945 the ship was lost after a cargo fire ( guano ).

The Passat is located at the Passat Harbor, the former submarine harbor. This offers space for 500 sailing boats.

The southern part of the peninsula, towards the Dassower See , is designated as a nature reserve " Südlicher Priwall ". The north with its Baltic Sea beach is characterized by forest, gray dunes , primary dunes and a flat sandy beach. 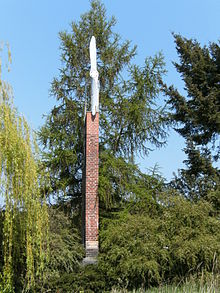 On Priwall port are in the bin for discarded Duckdalben two sculptures of a three-part work of art from Duckdalben by Sabine Klupsch. These steles remind of the border location of the Priwall during the GDR era.

The aviator memorial on Wiekstrasse with propellers on a brick stele commemorates the victims of sea aviation.

On the Mecklenburg Landstrasse between Travemünde-Priwall and Pötenitz , a boulder with the inscription "Never again divided" and the arms of Travemünde and Mecklenburg reminds of February 3, 1990, when the former border with the GDR was initially in the beach section for pedestrians around 9: 35 o'clock was opened. The boulder on the highway is already in Mecklenburg territory. The demarcation line ran here in 1945, and subsequently the inner-German border between the Federal Republic of Germany and the German Democratic Republic. Since reunification , the border between the states of Mecklenburg-Western Pomerania and Schleswig-Holstein has run here .