The river basin district ( RGE ) is a term from the EU Water Framework Directive . The catchment areas of the rivers are assigned to the states, and small areas are grouped into systematic groups.

In Article 2 of the Directive, the term river basin district is defined as follows:

"[...] a land or marine area defined as the main unit for the management of catchment areas, which consists of one or more neighboring catchment areas and the groundwater and coastal waters assigned to them"

The river basin units are the common and national planning areas for the implementation of the WFD in which water management plans are drawn up. 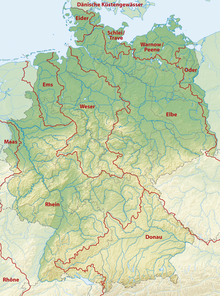 A1with some streams from the Sauwald to the Danube between the mouth of the Inn near Passau and Jochenstein; from there Danube tributaries on both sides Austrian; Since the Achleiten water level in the Jochenstein reservoir was flooded in 1955 , the Jochenstein below is the new hydrometric landmark
A2 March with the shares in the Czech Republic
A3with the groundwater body at Kittsee that drains into the Slovakian Danube
A4as well as Leitha Canal and groundwater body of the Parndorfer Platte near Nickelsdorf via Hungary to Leitha
A5 Endorheic basin , connected to the Rabnitz system via the Einser-Kanal
A6with a small area on the Arlberg in Tyrol

Since the new regulation of 2016, Italy has had seven river basin districts, referred to in Italian as "distretti idrografici".