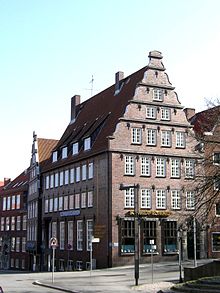 Portal as a detail

The Lübeck publishing house Schmidt-Römhild traces its tradition and development back to the bookseller and publisher Lauritz Albrecht († 1605), who was first mentioned as such in 1579 in Lübeck in an unbroken sequence of company transfers through inheritance , marriage and company sales . The printing company is mentioned for the first time in the necessary council privilege of the Hanseatic city of 1599. The publishing house is located at Mengstraße 16 in Lübeck's old town, a few houses next to the Buddenbrookhaus and opposite the Marienkirche and the foundation stones of the former Maria am Stegel chapel . The building was destroyed and rebuilt during World War II. The publisher is planning to move in September 2020 because the 1700 square meters of space available are no longer needed. The building was rented to the Hanseatic City of Lübeck, which houses parts of the administration there. The printing works had been relocated to Grapengießerstrasse earlier.

On the one hand, the publishing and printing house is active in the area of ​​telephone and address books in the area of ​​directory media. It includes some titles and the telephone directory for Lübeck, Ostholstein. The “know where” city and industry information is published with the support of city administrations and various business organizations for many cities and regions, including Lübeck, Kiel, Flensburg, Dortmund, Wiesbaden and Mainz. In 2016, the known-wo Berlin Brandenburg GmbH was founded as an independent company for the Berlin and Brandenburg region. One of the shareholders is Max Schmidt-Römhild GmbH & Co.KG. The offer includes online products.

Schmidt-Römhild also publishes a number of specialist journals, such as the IHK magazine for Lübeck, Kiel, Flensburg as well as mobile and secure and six other journals. Online apps for magazine content, other apps and network applications as well as online and mobile databases complete the publishing program.