Bodhgaya ( Hindi बोधगया IAST Bodhgayā , literally "place of enlightenment", from: bodhi = enlightenment) is a smaller city about 96 km from Patna in the northern Indian state of Bihar . It is located in the Gaya district .

In ancient times the city was called Uruvela ( Pali ) or Urubilva ( Sanskrit ). It was located in the Kingdom of Magadha , around 90 km south of Pataliputra , where Siddhartha Gautama was around 534 BC. Under a poplar fig (bodhi tree) the enlightenment (bodhi) attained. In Bodhgaya there is one of the holiest places of Buddhism , the Mahabodhi temple , where the Mahabodhi grows, which according to tradition is a descendant of that tree. In the small adjacent Muchalinda pond there is a sculpture of Buddha sitting on a lotus blossom , surmounted by a king cobra. The huge catfish in the pond are considered sacred. 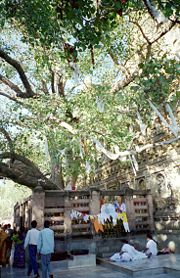 The Mahabodhi in Bodh Gaya

According to the views of Mahayana Buddhism , 1000 Buddhas should appear in the current world age ( Kalpa ) , all of whom attain enlightenment in Bodhgaya. The historical Buddha Shakyamuni was the fourth Buddha in this series. Bodhgaya is also called Vajrasana , the "Diamond Throne" in Mahayana Buddhism .

Bodhgaya has been an international Buddhist pilgrimage center since 1953. Buddhists from Sri Lanka , Bangladesh , Thailand , Burma , Tibet , Bhutan , Vietnam , Taiwan , Korea and Japan have built 45 monasteries and temples in Bodhgaya so far. A huge statue of the Buddha in meditation posture and life-size statues of his students (standing upright) made of gray stone are also located in Bodhgaya. The statue was unveiled by the Dalai Lama in 1989 . In 2002, the site was added to the list of World Heritage of UNESCO added.

In 1964 the Muslim scholar Mawlānā Muhammad Shahīr ad-Dīn founded the Islamic school Madrasat Diyāʾ al-ʿUlūm , which belongs to the Deobandis movement, near the Mahabodhi temple . It was originally housed in a small mosque, but was expanded in the 1980s on property originally intended for tourist purposes. In 2002 the school had approximately 154 students, ten teachers, and six other employees.

On July 7, 2013, following threats from Islamist groups, several low-explosive bombs exploded on the grounds of the Mahabodhi Temple.

Near the city is Gaya Airport .