(Common) wormwood , real-wormwood or wormwood ( Artemisia absinthium L. ), also old woman or Alsem is a species in the genus Artemisia from the family of Compositae (Asteraceae). 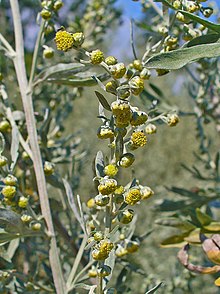 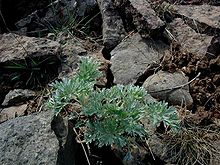 Vermouth in the Caucasus

Foliage cross-section with T-hair on the epidermis

Foliage leaf cross-section with sunken oil gland on the epidermis

The wormwood is a perennial , mostly herbaceous plant with heights of 40 to 60, occasionally up to 150 centimeters. Above ground, the plant appears greyish-green and has a strong aromatic scent.

The upright, densely leafed shoots emerge from a horizontally growing rhizome , sometimes lignified at the base and branching out several times in the upper area.

The shoot axes are slightly striped, have very small point-shaped oil glands and are closely hairy or almost hairless.

The flowers sit in short-stalked, drooping heads , which are grouped in up to 30 centimeters long, pyramidal, panicle-like groups. The bracts are two to three times three to five millimeters in size and broadly ovate. The sepals are densely hairy silky on the outside. The individual flowers are yellow with one to two millimeters long corolla tubes, which have two tips on the outer, 9 to 20 purely female flowers and five tips on the inside of the 30 to 50 hermaphrodite flowers.

The fruits are egg-shaped to cylindrical, about half a millimeter long achenes .

Vermouth occurs naturally in temperate Eurasia , India , Morocco, and Algeria . It grows preferentially on dry or sandy-clay soils near watercourses at heights of up to 3500 meters. In Central Europe it is a character species of the order Onopordetalia, but also occurs in societies of the class Agropyretea. Wormwood was introduced in North America and is found in self-sustaining populations .

The naturalized occurrences in all federal states of Austria are stated as frequent to rare.

With 0.15 to 0.4% wormwood contains a high concentration of bitter substances from the group of sesquiterpene lactones , including absinthin with 0.2 to 0.28% as the main component. Additional possible Artabsin , matricin , Anabsinthin and other substances before.

Essential oils make up 0.2 to 0.8% and contain (-) - thujone , (+) - isothujone , thujyl alcohol and its esters , chamazulene and other mono- and sesquiterpenes . Furthermore, various flavonoids were detected; smaller amounts of polyacetylenes are suspected.

Wormwood has been used as a medicinal plant since ancient times . Numerous effects have been attributed to it, including promoting appetite, digestion, and menstruation, as well as helping with headaches, jaundice, and inflammation. Wormwood is also known as an abortifacient . In ancient Greece the plant was consecrated to the virgin goddess of hunting Artemis , in Egypt, where it was also used as a love spell, to the fertility goddess Bastet . In the Middle Ages , its use as a medicinal plant was described in detail by Hildegard von Bingen, among others , who emphasized above all its external uses. In addition, wormwood was used to ward off mouse damage on books in writing ink and hung in wardrobes to protect against moths. It was also considered an effective repellent against witchcraft and demonic influences and was used in various rituals and in herbal hats against insomnia.

Even today, it is believed to be effective for stimulating appetite, for complaints of the digestive tract, such as gastritis or flatulence , for stimulating liver function and for spasmodic disorders of the intestinal and biliary tract area. The digestive effect is attributed to the bitter substances it contains. Fragments of the branch tips of flowering plants (Absinthii herba or Herba Absinthii) are used. These are processed in various commercially available phytopharmaceuticals as aqueous or aqueous-alcoholic extracts or can be prepared as tea.

Side effects can occur with severe overdose or the use of alcoholic extracts and are due to the toxic effects of thujone . They can include drowsiness, vomiting, abdominal pain, and in severe cases, kidney damage and central nervous system disorders. In contrast to alcoholic extracts, aqueous extracts contain relatively small amounts of thujone. The pure essential oil is not used medicinally due to the thujone content of up to 40%.

In addition to its use as a medicinal drug , wormwood can also be used as a digestive spice for fatty dishes.

Wormwood is a component of absinthe , an alcoholic drink with extracts of wormwood, fennel , anise and lemon balm , which became a fashion drug especially in the 19th century and was temporarily banned in various European countries due to its thujone content and its suspected health effects. Wormwood extracts are also used to make the drink wormwood , a wine flavored and fortified with spices and herbs .

In homeopathy , wormwood is also used against agitation and convulsive disorders. This application, however, involves homeopathic potentiations in which wormwood only plays a role during production, but is hardly or not at all in the finished preparation.

The English name wormwood (literally 'worm wood') is a folk etymological reinterpretation of the Old English name wermod and indicates that wormwood was ascribed anti- parasitic properties as a “worming agent”. Other forms of the name are (probably also folk etymological) based on warm because of the "warming" property of the vermouth decoction.

Wormwood is mentioned several times in the Old Testament , always in figurative use. A dramatic example of the meaning “source of bitterness” can be found in the New Testament , in Rev 8 : 10-11  EU .

The Latin name Artemisia absinthium indicates the namesake of the ancient goddess Artemis (Greek name of Diana ). Pseudo-Apuleius , author of a 5th century herb book , writes: “One of the herbs we call Artemisia, which Diana is said to have found and given to the centaur Chiron , who in turn named it in her honor “( De virtutibus herbarum 10). The addition absinthium is the Latin name for wormwood.