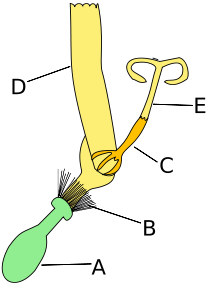 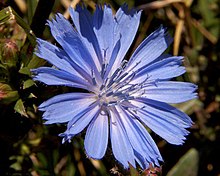 As ray florets (also ray flowers ) refers to zygomorphe single flowers in scheinblütigen flower heads of representatives of the plant family of the daisy family (Asteraceae).

The calyx is transformed into a pappus , it consists of bristles, hair or scales or it can also be completely reduced. The three or five petals are fused together in the lower part to form a short tube. In the upper area they form a so-called tongue (also called tongue leaf or ray), which is very elongated on one side and ends in five or three lobes, depending on the number of petals involved. The three to five stamens are fused on the anthers, through which the two-branched, scarred stylus grows . The mostly free stamens are fused with the crown at the base and form a stamen-corolla tube . The under constant and uni- ovary consists of two carpels with an ovule and basal placentation .

They are mostly on the edge of the flower heads next to the densely packed, central tubular flowers , as in many Asteroideae . This creates the overall impression of a large flower - but it is actually an inflorescence made up of many small individual flowers. The ray florets can stand on the base of the cup in the axilla of reduced bracts , which are called palea . There are achenes (Cypselas) or very rare stone fruits ( Chrysanthemoides formed).

The flowers are usually protandrisch (formerly male), the stylus pushes through the anthers tube and pushes the pollen out with "sweeping hairs" that are on the outside or the tip of the stylus (secondary pollen presentation). Only then is the scar capable of conception. They are very often only unisexual or sterile, as well as neutral, i. H. they have no sexual organs at all and only serve to attract people. A reduced shape is also possible, here the petals are completely or partially reduced. Two -lipped training is also rarely possible, bilabiat or pseudobilabiat ; with a three- or four-lobed upper lip and one or two small lower lobes, as in the tribe of the Mutisieae or in the subfamily of the Barnadesioideae and in the Pectis .

In the subfamily Cichorioideae and some Asteroideae, the flower heads only contain ray-flowers. There are also subfamilies that only have tubular flowers ( Carduoideae ).