Grünau is also known for the regatta course Berlin-Grünau and the lido (location east). The station complex of Grünau (location west) is also the connection of the property settlements that extend to the southern outskirts of Bohnsdorf .

The eagle frame runs as a connecting road from the northern Adlershof through the forest to the southeastern Schmöckwitz . The eastern location extends seamlessly into the increasingly dense development of the suburb of Berlin-Köpenick .

Illustration of the painting Rowing Regatta near Grünau by Ernst Oppler , around 1910

The following important information is missing from this article or section:
Information about the time between 1945 and today is completely missing.
Help Wikipedia by researching and pasting it .

Between 1747 and 1753, on the instructions of Friedrich II , the "old Fritz", colonist villages with the later names Müggelheim , Friedrichshagen and Grünau were founded. The place got the name Auff der Grünen Aue from the first four colonist families from the Palatinate in 1749 and the residents had to pay their hereditary interest to the office in Köpenick. Due to the insufficient heat from the sun and the scarcely fertile Brandenburg sand, the intention to continue the wine culture that had been brought with them failed . Therefore, they initially lived from the cotton mill and - like the Friedrichshagener - started a small silkworm farm . The Seven Years' War stopped the initially favorable development. The place remained sparsely populated for a long time, the colonist houses stood between Büxensteinallee and Libboldallee. In 1800 it had only 59 inhabitants. Gradually, the boat building and laundry industry settled here.

In 1858 there were four farm owners who employed 13 male and female servants. There were still two part-time farmers in the village with five male and female servants and 49 workers. There were nine possessions. Five were between 30 and 300 acres and totaled 356 acres. One property was twenty acres, three under five acres for a total of four acres. There was also a carpenter and a master wheelwright. In 1860 there was one public, 14 residential and 32 commercial buildings in the village. The residents cultivated 296 acres of arable land, 68 acres of meadow and 16 acres of garden land. With the establishment of the first stop of the Berlin-Görlitz Railway in 1866, the Berliners discovered the natural landscape, rich in water, as a local recreation area. In 1874 a line was put into operation as suburban traffic with Berlin. The first Berlin regatta club was founded in 1881 , and with the development of water sports, the flow of day trippers grew at the same time, which led to the construction of numerous restaurants and boathouses for rowing clubs, sailing clubs and canoeing clubs within the shore zones.

Theodor Fontane described the idyllic location of Grünau in his hikes through the Mark Brandenburg . Impressed by the charming location and the low land prices, wealthy citizens of the Wilhelmine era also settled in Grünau and had villas and country houses built on the banks of the Dahme . In 1900 Grünau already had around 2500 inhabitants; there were 152 houses.

In 1903, the Grünau protected area with the Steinbinde forester's house became a Köpenick-Forst Teltow portion of the estate, which was henceforth called Grünau-Dahmer-Forst . This share and Grünau were incorporated into the then newly created Greater Berlin on October 1st, 1920 and became a part of the administrative district of Köpenick. In 1932 Grünau had the sub-residential areas Insel Großer Rohrwall, Strandbad Grünau, Grünau Ost, Grünau Süd, Settlement on the Teltow Canal, Forsthaus Steinbinde, Wirthäuser Am Sportdenkmal, Hanffs Ruh and Richtershorn. The rowing and canoeing competitions were held here on the occasion of the 1936 Olympic Games .

Memorial stone for victims of the Kapp Putsch

Directly opposite the north exit of the Grünau S-Bahn station there is a memorial stone with the inscription:

He recalls the armed resistance of Köpenick workers against the Kapp Putsch . Alexander Futran ( USPD ), one of the leaders of the resistance, was shot dead by coup troops along with others on March 20, 1920 .

At the beginning of the 20th century, in addition to the water sports clubs, chemical factories also settled in Grünau, according to Landshoff & Meyer , which became a subsidiary of VEB Berlin-Chemie in the GDR era . 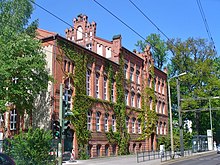 Lived or lived in Grünau