The Berlin-Grünau station is a railway station in the district of Grünau of Treptow-Koepenick at the Berlin-Görlitz railway . The station consists of the two operationally independent train stations Berlin-Grünau on the long-distance tracks of the Görlitzer Bahn and Berlin-Grünau (S-Bahn) on the parallel S-Bahn line from Berlin Ostkreuz to Königs Wusterhausen . It is used by the trains of the S-Bahn Berlin for passenger transport. Berlin-Grünau is a depot for the long-distance railway . Connections lead from the train station to the Berlin outer ring , which crosses the Görlitzer Bahn at Grünauer Kreuz north of the train station. In the southern part of the station, a freight line branched off to Schönefeld Airport , which was replaced in 2011 by a new connection to Berlin Brandenburg Airport . The original station building of the station on the south side of the plant has been preserved and is under monument protection .

The Görlitzer Bahn was one of the numerous projects of the "railway king" Bethel Henry Strousberg , which he tackled from the 1860s. When the Görlitzer Bahn opened on September 13, 1866, the Grünau stop was the first stop beyond Berlin. It initially had a side platform on the east side. Two years after the opening, Strousberg had a horse-drawn tram built from Grünau to manage the Diepensee estate. Due to its location on the Long Lake , the place quickly developed into a popular excursion destination for Berliners. The Berlin-Görlitzer Eisenbahn-Gesellschaft (BGE) responded to the heavy excursion traffic by laying additional trains between Berlin and Grünau. In 1874 the BGE expanded the section to two tracks. On September 17, 1890, the second track from Grünau to Königs Wusterhausen was completed. 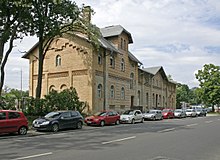 In the years 1888–1889, the station received a two-storey entrance building in brick construction . The building stood on the eagle frame at the junction with Kurfürstenallee . Around 1900, instead of the two side platforms, a central platform with a pedestrian underpass to the eagle frame was built. The system was removed again in 1906. The background was the four-track expansion of the Görlitz Railway to Grünau and the elevation of the railway body on a dam . The station was given a central platform a little further north on the long-distance tracks (Bstg B) and the new pair of suburban tracks (Bstg A). As a result of the expansion, the station building was now at the southern end of the platform on the outskirts. The new ticket hall was located below the tracks at the north end of the platforms. The construction of the long-distance platform was necessary because the suburban trains running beyond Grünau to Königs Wusterhausen continued to operate from Berlin Görlitz station and therefore remained on the long-distance tracks. The trains running on the suburban tracks, however, came from the Berlin Ringbahn . The earth masses required for the construction of the dam were taken from the nearby Falkenberg . On September 29, 1908, the elevated long-distance tracks went into operation, followed by the suburban tracks on May 1, 1909. To the south of the station, the Grünau workshop was built for suburban trains , from which the first trains to Berlin were deployed on May 1, 1910.

On May 1, 1911, the station was named Grünau (Mark) . As a result of the Greater Berlin Act, the station had been within the boundaries of Greater Berlin since October 1, 1920 . The continuation of the suburban tracks from Grünau to Königs Wusterhausen was in the planning stage in 1912; the project was not implemented because of the First World War . As part of the " Great Electrification " of the Berlin city, ring and suburban railways, the suburban tracks of the Görlitzer Bahn were electrified in the second half of the 1920s and electrical operation of the later "S-Bahn" began on November 6, 1928. For the construction, among other things, the depot had to be rebuilt and the platforms raised to 96 centimeters. After electrification, most of the suburban trains to Königs Wusterhausen did not start until Grünau, only a few left from Görlitz station.

The station was named Berlin-Grünau on October 1, 1929. For the 1936 Summer Olympics , additional passimeters were set up in a wooden porch at the north end . Since around 1935 there was a platform with a check- in house at the northern end of the former Diepensee manor railway in Gründerstraße . The Henschel aircraft plants (HFW) took the Gutsbahn from that time as works railway and set up factory passenger transport between Grunau and the work in Schoenefeld one. The HFW entrusted the management of the operation to Vering & Waechter , who commissioned the Neukölln-Mittenwalder Eisenbahn (NME) with the implementation. The Henschelbahn was connected to the Berlin-Grünau station via a rail link .

The plans drawn up by the Reichsbahnbaudirektion Berlin 1937–1941 for the expansion of the railway network in Berlin as part of the Germania planning also provided for the extension of the S-Bahn tracks to Königs Wusterhausen. There are various details about the progress of the work, some only speak of earthworks carried out, others of the fact that the third and sometimes the fourth track between Grünau and Eichwalde had already been laid. From 1941, the outer freight ring crossed the Görlitzer Bahn north of the station . For the connecting curves from the direction of Grünau, the Richterstraße overpass at the north head was to be extended by four more superstructures, one of which was initially in operation for the connecting curve Grünau - Altglienicke.

The former station building was used by several Reichsbahn offices from 1946, and the southeast exit was closed from 1947 at the latest. On May 4th of the same year, the connecting curve Grünau - Wendenheide to the northern outer freight ring went into operation. For the diversion traffic from the Anhalter and Dresdener Bahn to East Berlin , the plan came up around the same time to extend platform B for long-distance trains to 260 meters. The project was not implemented. Instead, the following year, a provisional third platform C went into operation between the two connecting curves to the outer freight ring at the level of the two suburban platforms. This could be reached from Richterstraße and after crossing the ground level crossing the connecting curve to Altglienicke. From June 15, 1948, the Reichsbahn used railcars from here to Kaulsdorf and from July 26, 1948 to Lichtenrade . By autumn 1948, the Reichsbahn considered electrifying the connection to Kaulsdorf for electric S-Bahn operation, but did not implement the project. In March 1949 she stopped traffic to Kaulsdorf. From August 17, 1949, railcar services were also possible via Schönefeld to Mittenwalde . The trips to Lichtenrade were stopped on October 8, 1950, those to Mittenwalde shortly afterwards.

In order to be able to close the Görlitz train station in the western sector, the Reichsbahn extended the electric S-Bahn on April 30, 1951 to Königs Wusterhausen. Since the suburban tracks laid during wartime fell victim to reparations, the Reichsbahn provided the Königs Wusterhausen - Grünau long-distance track with the power rail , which from then on only served the S-Bahn traffic. As part of the electrification, platform B was connected to the suburban tracks and continued to be used by the S-Bahn. On the occasion of the World Festival of Youth and Students , the northern entrance was given a spacious counter hall with several conductors' tubs in the same year . The later installation of swing doors and the construction of an upper floor completed the building. On May 22, 1955, the Reichsbahn resumed railcar traffic on the southern outer freight ring from Grünau. The trains stopped in Grünau at a newly built platform (Berlin-Grünau Hp) on the connecting curve to Adlershof, west of Richterstrasse. The platform was used until the connection was closed on May 31, 1958 and the remains were removed in 1981.

After the Wall was built on August 13, 1961, the Ringbahn and the Görlitz Railway to the southeast developed into the north-south axis in the East Berlin S-Bahn network. The trains, which were previously partially routed to the western part of the city via the Ringbahn, now had to stop along the Görlitzer Bahn. Grünau temporarily became the end point of train groups N ( Bernau  - Grünau) and D ( Alexanderplatz  - Grünau). The train group H ( Friedrichstrasse  - Königs Wusterhausen ) drove through.

For freight traffic to Berlin-Schönefeld Airport , a railway line was opened in 1963 from the Grünau train station south of Berlin-Bohnsdorf to the airport. It replaced the earlier Henschelbahn, which had gone out of service at the end of the 1950s.

In the spring of 1989 the south-east stairwells were included in the renovation of the platforms and the south-east exit was reopened in 1990 after the work was completed. The traffic to Königs Wusterhausen was shifted to the Südring from 1994, while the trains that used the eastern ring line ended in Grünau. The depot was closed for temporary renovation between 1996 and 1998. An electronic signal box (ESTW) has been regulating the track systems at the station since 2005 , the old, still occupied signal boxes Gaw and Gas were closed when the new one opened.

In 2011, the Glasower Damm Ost – Bohnsdorf Süd railway , a connection from the Görlitzer Bahn via the new Berlin Brandenburg Airport to the Berlin outer ring, went into operation. It also received a connecting curve to Berlin-Grünau and replaced the freight route to Schönefeld Süd in this area.

The building of the former guard interlocking Gaw , located on the site of the company workshop, southeast of the wash hall, was demolished in March 2020. The interlocking technology itself had been out of operation since August 1st, 2005.

The four-track through station on the Görlitzer Bahn is the end point of line  S8 and Monday to Friday of line  S85 and is also served by line  S46 , which continues through to Königs Wusterhausen .

Since June 11, 1909, there has been an option to change to line 2 of the Cöpenick city tram at Grünau station . The Schmöckwitz – Grünauer Uferbahn , which opened on March 9, 1912 , also has its starting point at the station. In 1926, both lines were combined to form line 86, which today operates as line 68 in the Berlin tram network .

In addition, the bus routes 163, 263 and 363 as well as the night line N62 of the Berliner Verkehrsbetriebe stop at the station.