The Wittenbergplatz is a square in Berlin district of Schoeneberg the district Tempelhof-Schöneberg . It is part of the general train , a sequence of streets and squares that connects the districts of Schöneberg and Kreuzberg . The rectangular square was laid out between 1889 and 1892. It is traversed in a west-east direction by the Tauentzienstrasse - Kleiststrasse street .

The  future square was named on October 31, 1864 after the battle of Wittenberg on January 13, 1814 (siege and cannonade of the city) against the Napoleonic troops in the Wars of Liberation . based on the cabinet order of July 9, 1864. The name of the Tauentzienstrasse , which adjoins the west side of the square, is directly related to this . General von Tauentzien received the nickname "von Wittenberg" in honor of the battle - although he was not personally present when the city was stormed. Structurally, however, the square was only laid out around 1890, when the western area of ​​the general train project was realized.

Wittenbergplatz with the Kaiser Wilhelm Memorial Church in the background, around 1915

During the First World War , the Berlin Secession , namely Ernst Oppler , Lovis Corinth and Eugen Spiro, met for a regulars table in a small beer pub on the square.

Wittenbergplatz with the KaDeWe ,
aerial photo from 1920

The Berlin regional reform with effect from April 1, 1938 resulted in numerous straightening of the district boundaries as well as some major changes to the area. So the entire area of ​​the Wittenbergplatz became the Schöneberg area.

The square was brought into its current state in the 1990s. Between 2008 and 2009, the ceiling of the underground tunnel was extensively renovated over a length of around 800 meters for around 11.4 million euros due to the ingress of water. For this purpose, parts of Wittenbergplatz were cordoned off, the left-hand lanes of Tauentzienstrasse and the passage to Bayreuther Strasse were blocked, and green spaces and flowers were removed, as access to the ceiling was only possible from above.

Wittenbergplatz was also the subject of artistic reception, with the work Markt am Wittenbergplatz by Ernst Oppler and with the installation TEL-NEANT 1998 by George Zongolopoulos .

Right in the middle of the square is the distinctive cross-shaped access building to the Wittenbergplatz underground station , between the lanes of the connection from Tauentzienstrasse to Kleiststrasse. At the southwest corner of the square is the Kaufhaus des Westens (KaDeWe) , which is well known beyond Berlin .

There are other buildings around or nearby, such as the Hotel Mercure Wittenbergplatz (number 3), built in the 1990s, the Plaza Wittenberg and the Deutsche Akademie-Sprachschule . 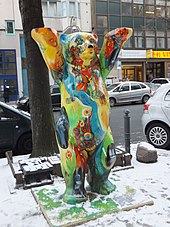 On the street Wittenbergplatz, several orthopedic surgeons from a neighboring medical center financed the installation of a Buddy Bear , which was named Endobär II , designed by the artist Andrej Bitter . Viewers can see various endoprostheses on the artificial animal and on joint models . The bear is number 454 from Berlin Buddy Bär GmbH.