This article is about the sculptor. For the resistance fighter against National Socialism of the same name, see Fritz Schaper (politician) 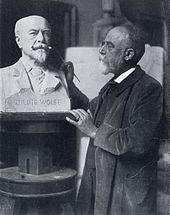 Fritz Schaper in his studio, 1909 (photo by Marta Wolff) 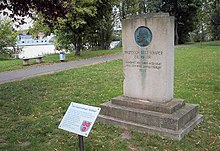 Professor Fritz Schaper, sculptor - dedicated by his hometown Alsleben (Saale) on the occasion of its millennium celebration in 1936 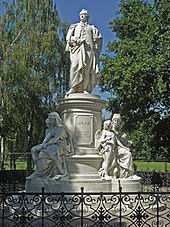 Blücher monument in Kaub am Rhein, 1894 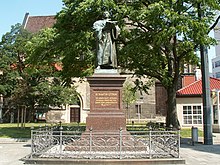 Luther monument on the eastern Anger in Erfurt 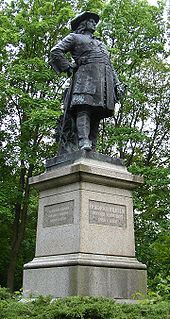 Monument to the Great Elector in Fehrbellin, 1902 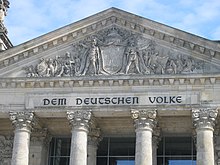 Gable of the Reichstag, relief by Fritz Schaper and the lettering designed by Peter Behrens

Hugo Wilhelm Fritz (Friedrich) Schaper (born July 31, 1841 in Alsleben (Saale) ; † November 29, 1919 in Berlin ) was a German sculptor and medalist of the late 19th century and a representative of the Berlin School of Sculpture . From 1875 he taught as head of the nude room for sculpture and from 1880 to 1890 as a professor at the Berlin Art Academy .

Schaper was born as the fourth son of Pastor Friedrich Gottfried Peter Schaper and his wife Antonie Schaper geb. Heiligenstädt. On January 6, 1848, when Fritz was not yet 7 years old, his father died and his mother moved to Halle (Saale) with her seven children . She died the following year on July 14, 1849, and the children were placed with different families. Fritz Schaper grew up with Graf Kielmannsegg , first in the country, then again in Halle. There he attended the secondary school of the Francke Foundations . He left when he was 15 and completed an apprenticeship as a stonemason at CA Merckel. This showed his talent and the desire to become a sculptor arose.

For further training, Schaper went to Berlin in 1859, where he attended the Berlin Art Academy for two years . There he practiced, among other things, anatomical drawing and drawing according to antiquity. At the same time he became a student of the sculptor Albert Wolff in 1860 . Just like Wolff, who was a friend and student of Christian Daniel Rauch, who had recently died , Schaper took Rauch as a model for his further artistic work. On his 23rd birthday, Schaper got his parental inheritance paid out, which brought him more financial independence. In 1865/1866 he created his first independent work, the plaster group Bacchus and Ariadne . In 1867 he traveled to the world exhibition in Paris . He then set up his first own studio on Grosse Praesidentstrasse, but soon moved to Albrechtstrasse . In the same year he got an order for a Borussia and two lions at the war memorial in Halle, which was unveiled in 1872. Initially, however, there were still no major orders.

In the 1870s, Schaper often took part in artist competitions. An important success was the 1st prize in the competition for the Berlin Goethe monument in 1871, which he was commissioned to carry out two years later and which was unveiled in the Tiergarten in 1880. In 1875 he became head of the nude room for sculpture under Anton von Werner . This position earned him a secure income and a higher reputation. Other important orders followed, including for the Cologne Bismarck Monument , the Braunschweig Gauß Monument and Hamburg Lessing Monument . Schaper also created his first busts during this time .

In January 1880 Schaper became a member of the Prussian Academy of the Arts , and in June of the same year, on the day the Goethe monument was unveiled, he was awarded the title of professor. In the following year he became a member of the Senate of the Academy of Arts and an honorary member of the Dresden Art Academy . He received various awards such as the Knight's Cross of the House Order of the White Falcon (1881), the Commander's Cross of the Order of the Oak Crown (1882), and became a Knight of the Prussian Order Pour le Mérite (1884). Schaper's popularity as a sculptor grew, and he increasingly received direct commissions without having to assert himself against competitors. He made numerous busts for private individuals and institutions. In 1884 his monument to August von Goeben was unveiled in Koblenz, and in 1889 his first entrepreneur monument , the Alfred Krupp monument at the Marktkirche in Essen.

In the 1890s, Schaper received, in addition to many other commissions, for the first time those that required imperial approval. Among other things, he created eight monuments depicting princely people. The sandstone gable relief on the main facade of the Reichstag building (1891–1893) is also an important work of this creative period.

The 20th century began for Schaper with a severe psychological crisis and depression , which in 1900 forced him to stay at the Bellevue Sanatorium . In the following years he had health problems and his artistic activity decreased. In 1901 he received a large gold medal at the Great Berlin Art Exhibition . He toured Italy (1901), Sicily (1906) and America (1907). In 1903 he received one last imperial commission, the Old Germanic wisent hunt for the Berlin zoo. In 1905 he was re-elected Senator of the Academy of Arts and received two awards, the Red Eagle Order II. Class with Oak Leaves for the Monument to the Great Elector and the Crown Order II. Class with a Star for Johann von Küstrin . In the period after that, he mainly created busts and less monuments.

In the 1910s, Schaper increasingly turned to tomb sculpture. A few weeks after the beginning of World War I , his son Wolfgang was seriously injured on the Western Front, which necessitated a leg amputation. This burdened Schaper in the following years, in addition there were motor disorders of the right hand, from which he suffered from 1915 and an incipient blindness. Most of the time he only led his assistants with the sculpting and made final corrections. He died in 1919 at the age of 78.

Schaper was one of the signatories of the appeal to the cultural world of October 4, 1914.

The court jeweler Hugo Schaper, who among other things made the crown of Kaiser Wilhelm II , was a brother of Fritz Schaper. The pollster Elisabeth Noelle-Neumann was a granddaughter of Fritz Schaper. Schaper was given a Berlin grave of honor in Cemetery IV of the Jerusalem and New Church congregation on Bergmannstrasse in Kreuzberg .