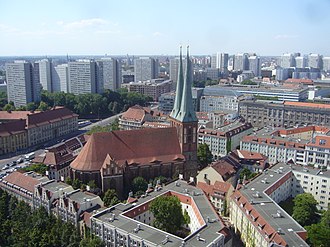 View from the town hall tower to the Nikolaiviertel

The Nikolaiviertel in Berlin 's Mitte district is the capital's oldest settlement area. In World War II almost completely destroyed, it was 1980-1987 by order of the magistrate of East Berlin on the occasion of the 750th anniversary of the city by architect Stahnsdorfer Günter rebuilt. Around the reconstructed Nikolaikirche , an ensemble of historic town houses and appropriately adapted prefabricated buildings was built on an almost medieval floor plan . The monument is now one of Berlin's sights.

Historic neighborhoods in the city center of Berlin, in Berlin-Mitte , as they were divided in 1727.

The Nikolaiviertel is one of what used to be four quarters in the historic district of Alt-Berlin , which is part of today's Mitte district. The name derived from the Nikolaikirche has existed since at least 1727 and has been used again since the reconstruction in 1987.

In terms of urban planning, the quarter ( living-world-oriented rooms ) belongs to the prognosis room “Center 01”, which is designated for the statistics with 01011303: District region 13 (Alexanderplatz) and within it planning room 3 (Alexanderplatzviertel). The Spree is included in the planning area. From around 1870 to 1884, according to the address book, the square belonged to the police station 21, and to the town hall, Stralauerstraßen and Nikolaikirchhof districts.

The reason for the foundation of the two places Berlin and Kölln was the Mühlendamm built between 1220 and 1230 . In the center of the Berlin settlement on the eastern bank of the Spree, the St. Nikolai Church, a late Romanesque field stone basilica , was completed around 1230 . At the same time, the Petrikirche was built directly opposite on the western bank on the Spree island as the focal point for the somewhat smaller Kölln, which was first mentioned in a document in 1237. The year was used as the basis for the city anniversaries in 1937 (700 years) and 1987 (750 years), although the only confirmation document that has been preserved dates from 1238 and only mentions Kölln and not Berlin. Details are not known about the beginnings of the two cities, any written evidence - foundation documents or the like - were probably destroyed in the city fire of 1380.

The first surviving document mentioning Kölln is from October 28, 1237. Berlin is only mentioned in a document on January 26, 1244. Because both cities soon grew together, Berlin was born in 1237; the major city anniversaries are based on this date. On March 20, 1307, the two places were combined to form the twin cities of Berlin-Kölln, and in 1486 the Elector Johann Cicero made them his permanent residence . At that time the settlement had grown into an important trading center, which had also joined the Hanseatic League in the 14th century .

Growing economic power and relative prosperity made it possible for the citizens to significantly rebuild their central building, the Nikolaikirche, as early as 1264. A Gothic hall church was built , which was changed again and again in the following centuries. An essential feature of the church and the old Berlin city center, however, remained the asymmetrical medieval facade with the one, slender tower until the end of the 19th century, which was only replaced by a neo-Gothic double tower in the 1870s . While Berlin was constantly expanding and new urban centers formed, the Nikolaiviertel hardly changed; mainly craftsmen lived and worked in the narrow, winding streets. A considerable part of today's Nikolaiviertel took part in the development of Berlin's city ​​center and was built on with commercial buildings, one of the largest buildings from the end of the 19th century was the Nathan Israel department store, which took up almost the entire area between Spandauer, Königstraße, Poststraße and Probststraße .

Redesign plans in the Nazi era

In connection with the 700th anniversary of Berlin in 1937 during the National Socialist era , plans began to fundamentally redesign the area around the Nikolaikirche. For this purpose, it was planned to remove most of the buildings, which were perceived as inferior and which were in an extremely dilapidated, dilapidated and sometimes unbearable condition for the residents. An open-air museum was to take its place. In this forum the facades of valuable historical town houses would have been erected, which would have been removed in other parts of the city in the implementation of the plans for the world capital Germania . In this context, the Nikolaikirche was profaned in 1938 ; the public justification was "conversion as a music dome".

During the Second World War , between 1943 and 1945, the old town district perished in a hail of bombs and street fighting. After the end of the war, the remains were removed, and some buildings that had not been destroyed were also demolished. For decades, the area played no role in Berlin urban planning. The administration of East Berlin concentrated on the most effective possible procurement of living space and on large-scale, representative building projects such as the Stalinallee . The neglect of the historic city center becomes clear from a planning contribution from 1959: Instead of the Nikolaikirche and the remaining buildings, the Spree was to be expanded into a harbor basin for excursion boats as part of the construction of the Central Government Tower of the GDR .

Reconstruction of the Nikolaiviertel

View from Fischerinsel to the new Nikolaiviertel, 1987 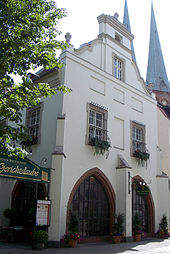 The situation only changed when the 750th anniversary of Berlin was imminent in 1987. The city administration showed a new appreciation for the historical roots and planned to develop an attractive and touristic district on the wasteland. A programmatic paper demanded that the old town center "should, in accordance with its historical significance, be shaped into a harmonious unit with new, reconstructed and rebuilt buildings, streets and squares [...] so that the lively relationship to the original [...] can be experienced". The building project was completed in the anniversary year of 1987. Like most reconstructions of destroyed buildings and sections, the Nikolaiviertel has been judged differently since then.

In the course of the reconstruction of the quarter, the few existing buildings were restored and otherwise numerous new buildings, some with historicizing facades, some with a special type of industrial prefabricated construction - with gables, ornaments and wrought-iron decorations, but also with tilting windows and modern apartments. Of the reconstructions , the town houses behind the Nikolaikirche are probably the most faithful to the original. This also applies to the town houses on Molkenmarkt , although the arrangement of the houses is a free collage.

The Nikolaikirche, which was destroyed in the Second World War, except for the outer walls, was restored to its existing form until it was destroyed. A number of small town houses, especially in the vicinity of the church, were completely rebuilt in historical forms. The Ephraim-Palais , which was demolished in 1936 on Mühlendamm , was rebuilt using original parts of the facade, offset by twelve meters from its original location. The Gasthaus Zum Nussbaum , once a hangout for prominent artists such as Heinrich Zille , Otto Nagel and Claire Waldoff , was created as a copy on Nikolaikirchplatz; the original, which was probably built in 1571, was located at Fischerstraße 21 in Alt-Kölln until it was destroyed in 1943. The court arbor of the old town hall , the restaurant Zur Rippe on Poststrasse at the corner of Mühlendamm and the Gasthaus Zum Paddenwirt at the corner of Nikolaikirchplatz and Eiergasse were reconstructed as further historic buildings in the Nikolaiviertel .

Some outstanding buildings interrupted the largely preserved medieval structures. On the southern edge of the district, the Ephraim-Palais was completed in 1766 on the property at the corner of Mühlendamm at the corner of Poststraße , an extraordinarily successful example of Berlin rococo architecture , soon popularly known as “the most beautiful corner of Berlin”. The court jeweler and financier of Frederick the Great , Veitel Heine Ephraim, had a representative residence built here, adorned with putti , stone vases and filigree, gilded balcony grilles. Nearby is the Knoblauchhaus , also built around 1760 in the late baroque style, but since a renovation at the beginning of the 19th century, the exterior has a rather early classical appearance; Inside, some details still refer to the Rococo origins. It was the residence of an immigrant family from Hungary , who for several generations produced bustling, wealthy and influential citizens of Berlin. Finally, the Electoral House is worth mentioning. It was originally a Renaissance building made of red sandstone , rebuilt in the 18th century in baroque style. It was named after the Elector Johann Sigismund (1572–1619), who fled here because he was convinced that the White Woman was haunted in his castle .

Monuments included in the Berlin monument list for the Nikolaiviertel building ensemble.

The streets and alleys of the district follow the traditional floor plans and are paved according to historical models , except for the modern street Am Nussbaum . Around 2000 residents live in around 800 apartments on an area of ​​almost 50,000 m². 33 shops, 22 restaurants and various museum facilities, such as the Nikolaikirche, the Knoblauchhaus and the Ephraim-Palais are available to visitors (status: 2010).

The foundation fountain (also known as the Wappenbrunnen) is located next to the entrance to the Nikolaikirche and was built in 1987 based on a design by Gerhard Thieme from 1928. The fountain is made of sandstone and steel. The wrought iron crown was created by the blacksmith Hans-Joachim Kunsch and the bronze chain was made by Stefan Kuschel. Three steps lead to an octagonal well basin four meters in diameter. Coats of arms are attached to the sides. In the middle is a six-meter-high column, which is crowned by a bear holding a coat of arms with an eagle. The fountain erected in the oldest settlement area in Berlin is intended to commemorate the founding of the city. In the Eiergasse there is also a historical fountain with metalwork by Hans-Joachim Kunsch.

The bronze sculptures Allegory of Science and Klio by Albert Wolff are located on Nikolaikirchplatz . They were part of the equestrian statue for Friedrich Wilhelm III, which was created between 1860 and 1871 and destroyed in the post-war period . in the pleasure garden . Furthermore, on the banks of the Spree, at Propststrasse, is the bronze sculpture of Saint George, created between 1849 and 1853 . It is one of the main works by August Kiss and was previously in the Eosanderhof of the city ​​palace , then in the Volkspark Friedrichshain . At the height of Mühlendamm there are two lions by an unknown sculptor who originally stood guard in front of the Reichsmünze on Molkenmarkt, as well as the sculptures Allegory of Strength and War Science by Reinhold Begas , which formerly stood in the fame hall of the armory.

Critics regard the Nikolaiviertel as a difficult-to-bear mixture of different set pieces. Proponents of the concept, on the other hand, argue that the alternative of providing modern buildings with traditional facades is not more authentic.

At the beginning of 2018, the Nikolaiviertel was added to the Berlin list of monuments. According to the State Monuments Office, it is the “most prominent example of a changed building policy in the GDR in the 1980s” and represents a “phase of reconsideration of the urban qualities of grown districts”.