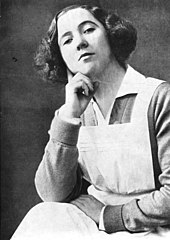 Claire Waldoff (born October 21, 1884 in Gelsenkirchen , † January 22, 1957 in Bad Reichenhall ), born Clara Wortmann , was a German interpreter of cabaret in various genres . She saw herself as a folk singer . Their repertoire was broad.

She was particularly successful with performances of chansons , sung in the Berlin dialect . Your most famous songs are Wer throws because there with clay , After meene Beene is janz Berlin crazy and Hermann heeßta . She appeared in revues and operettas , sang soldiers' songs as well as folk tunes . Claire Waldoff performed songs by around 15 composers and 25 songwriters , most often by Walter Kollo and Willi Kollo , Rudolf Nelson , Claus Clauberg , Eduard Künneke , Hans May , Harry Senger and Kurt Tucholsky .

Claire Waldoff as Rautendelein in The Sunken Bell by Gerhart Hauptmann , 1905

Clara Wortmann was born as the eleventh of 16 children to a family of innkeepers from Clementine (née Hiltropp) and Wilhelm Wortmann. In the years to the end of the 19th century she took part in the first high school courses for girls in Hanover . More precise data cannot be proven. Several sources report, including herself in her autobiography from 1953, that during this time she lived in Drostestrasse with Maria and Theodor Schmitz, the later parents of Theo Lingen . Since her wish to become a doctor could not be realized for financial reasons, she decided to pursue the acting field and took on the stage name Claire Waldoff.

In 1903 Claire Waldoff had her first acting engagements in Bad Pyrmont in Lower Saxony and Kattowitz in Upper Silesia. In 1906 she came to Berlin for smaller performances. There was also a screen debut in silent film in 1915. But she made a career as a cabaret chanson and lied singer. Their artistic marriage lasted until 1936 and ended entirely after 1942.

In 1917 Claire Waldoff met Olga von Roeder (1886–1963) in Berlin, who came from an American actor family and was a descendant of the Texas settler Albrecht von Roeder . The two were not only a focal point of the lesbian nightlife in Berlin in the 1920s, but they also ran a cultural-political salon for exchanging ideas among lesbians. They were partners in life until her death . "We both had the big ticket against each other", wrote Waldoff in her memoir, "Olly is a rare, pure character, a wonderful person".

Claire Waldoff kept very close friends with the artists Kurt Tucholsky , who u. a. she wrote some song texts under the pseudonym Theobald Tiger, and Heinrich Zille . The painter's point of view as he saw Claire Waldoff found its way into the text of a song that Claire sang in memory of Zille's death. It read: “As you describe it yourself, [I] am a picture from your pictures”.

From 1939 until her death she lived with Olga von Roeder in seclusion in Bayerisch Gmain . The currency reform of 1948 cost them their savings and impoverished them. In July 1951 the Berlin Senate granted her an honorary salary of 150 D-Marks per month. Her autobiography was published in 1953 . She died on January 22, 1957, at the age of 72, after a stroke. Her urn was buried in the Roeder family grave in the Prague cemetery in Stuttgart, as was her urn after Olga's death in 1963. When the family grave was closed twenty years later, both grave vessels were moved into a common niche in the right rear outer wall of the columbarium at the instigation of the city of Stuttgart .

Poster for the Linden Cabaret by Josef Steiner (1914) 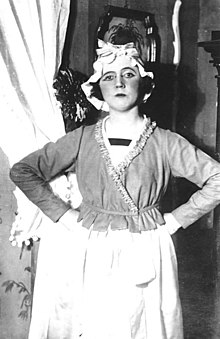 Claire Waldoff initially received smaller comedy roles in the Figaro Theater on Kurfürstendamm in 5 plays by Paul Scheerbart . In 1907 she switched to cabaret . Rudolf Nelson engaged her for the Roland Theater in Berlin on Potsdamer Strasse. She made her first appearance in an Etonboy suit. He made her the star of Berlin overnight. Shortly before the performance, the composer Walter Kollo wrote her a song about a dear drake and his Schmackeduzchen . It was the replacement for a program of anti-militarist songs that was banned by the censors. She soon appeared in Chat Noir on Friedrichstrasse and at the Linden-Cabaret Unter den Linden. During the First World War she played in the Theater am Nollendorfplatz in Walter Kollo's war operetta Always solid druff (lyricist Hermann Freund, Herman Haller, Willy Wolff, 1914) and was later (1916 ) engaged in the Apollo Theater in Königsberg (Prussia) . From 1924 she received engagements in equipment reviews, among others with Erik Charell .

Claire Waldoff specialized in popular songs , pop and chansons in the Berlin jargon , she had learned to pub crawls. Her trademark was a tie, shirt blouse and bronze red bob haircut. She smoked and swore on stage. She herself later described her charisma as follows: “My simple manner, without gestures, only on facial expressions, only on the facial expressions of the eyes, was something new on the cabaret stage. I was and remained the big number in my simplicity. "

She reached the peak of her career in the mid-1920s. She appeared in the two largest variety theaters in Berlin, the Scala and the Wintergarten , and toured Germany. She was hired for operettas and set revues and stood on stage with the still unknown Marlene Dietrich . The radio played their songs. Their record sales reached record highs. At that time, her repertoire comprised around 300 pieces.

With her partner Olga von Roeder, she was also the center of lesbian Berlin. She regularly visited the women's club Pyramide , which met in the Toppkeller in Berlin-Schöneberg . The dancers Anita Berber and Celly de Rheydt , elegant women, painters and models , among others, frequented the city .

The takeover of power by the National Socialists in 1933 also meant a turning point for Claire Waldoff. For some time she was banned from political appearances because she had recently appeared at the Communist Red Aid in the Berlin Sports Palace . After she joined the Reich Chamber of Culture , it was repealed. In the mid-1930s she appeared in a double program with Lene Ludwig in Berlin, who performed parodic dances with masks by celebrities.

Her career collapsed in 1936. Propaganda Minister Joseph Goebbels forbade her to appear at Scala in Berlin . There were fewer and fewer engagements for her in Berlin. In 1939 she still appeared in radio wish concerts. The Wehrmacht hired her to look after the troops. In January 1942 she sang in front of German soldiers in occupied Paris .

Own publications during his lifetime

Performer / author of the melody

Works about and about Claire Waldoff

Sound carriers with original recordings by Claire Waldoff, which were published and edited post mortem:

Interpretations of their songs

“Sing to whom singing is given. But you, Clärchen, sing even without him! God sure said to her. The incomparably funny little jar crushes the words, roars the melody from a grater's throat [...]. You actually want to hit her in the face for hours! She stands there smiling so cheeky and happy. The head glows red. Round all curves. The eye winks knowingly, every word crows with a crawl. Hilarious, adorable - an original. "