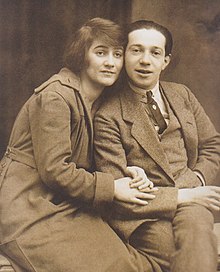 Friedrich Hollaender (born October 18, 1896 in London , † January 18, 1976 in Munich ), also known as Frederick Hollander - after his name in American exile - was a German revue and sound film composer , cabaret artist and music poet. 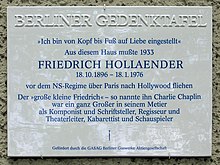 Friedrich Hollaender was born in London. His father was the then well-known operetta composer Victor Hollaender . His mother Rosa Perl was a revue singer in the circus . His paternal grandfather loved music and theater and encouraged his three sons (Friedrich's father and his brothers) accordingly. Felix and Gustav Hollaender , Friedrich's two uncles, both held important positions in Berlin's cultural and musical life: Felix as dramaturge for Max Reinhardt and Gustav as director of the Stern Conservatory . Friedrich was the only child of his parents.

At the turn of the 20th century, the Hollaender family moved to Berlin , where they originally came from. Victor worked there at the Metropol-Theater on Nollendorfplatz .

Even as a child Hollaender improvised on father's piano . He became a master student at the Stern Conservatory with Engelbert Humperdinck . In his youth he often played the piano in the silent movie theater on the corner. He evidently mastered the improvisation of previously unseen films perfectly.

In 1914 and 1915 Friedrich Hollaender was in New York and Prague . Later he was spared the war in that he was supposed to lead the orchestra in a front theater on the western front through family ties (Uncle Felix) . This phase may have been a break in Hollaender's artistic life, from then on entertainment mingled with serious music.

After the First World War , Hollaender met like-minded people like Kurt Tucholsky , Klabund , Walter Mehring , Mischa Spoliansky , Joachim Ringelnatz and the young actress Blandine Ebinger to found a cabaret . It entered the smoke and mirrors in the basement of Max Reinhardt 's Grand Playhouse on. The building stood on the Zirkusplatz, Friedrichstrasse at the corner of Schiffbauerdamm , was used as the Friedrichstadt-Palast after the war and was demolished in the 1980s because it was dilapidated . Reinhardt himself initiated this cabaret, but soon handed over the management to Hans von Wolhaben . Blandine Ebinger and Hollaender married, their daughter is called Philine (* 1925). She was the first wife of the (then unknown) future cabaret artist Georg Kreisler , with whom she has a son.

In the 1920s, Hollaender became a fixture in Berlin's cultural scene. He has worked at various cabaret theaters (including Trude Hesterberg's Wilde Bühne), composes and texted songs and accompanied Blandine and others such as Grete Mosheim on the piano. He later wrote reviews , including for Rudolf Nelson . In Charlottenburg he opened his own stage, the Tingel-Tangel-Theater .

In addition to the Tingel-Tangel, which Hollaender ran together with Georg H. Will , the brother-in-law of the film actress Marlene Dietrich , he also set films to music. One of the highlights of his work was certainly The Blue Angel , whose melody from head to toe is still a household name today; Stefan Weintraub's Syncopators, with whom he had previously played as a pianist , also appeared in this film .

In 1933 Hollaender had to leave Germany because of his Jewish descent; two years earlier he had ridiculed anti-Semitism as absurd (cabaret song : The Jews are to blame for everything on the tune of the Habanera from Bizet's Carmen ). His path led him first to Paris with his second wife Hedi Schoop . There he stayed for about a year in the large German émigré community. In 1934 he moved to Hollywood . There he first opened the American edition of his Tingel-Tangel Theater . Later he came back to film, who was suffering financial hardship these days. There he initially directed and later began to play music again. His first book Those Torn from Earth was published in 1941.

After the war, Friedrich Hollaender stayed in the USA until 1955 . In Munich , where he then settled, he began again with cabaret. After the failed revue Scherzo , he wrote revues for the theater Die Kleine Freiheit in Munich. But the time of great cabaret was over. He had a cameo appearance in 1961 in the film Eins, Zwei, Drei by Billy Wilder as the conductor of a hotel band. In 1960 he was awarded the Cross of Merit 1st Class of the Federal Republic of Germany, in 1965 he received the Gold Film Ribbon for many years of outstanding work in German film, and in 1972 the Schwabing Art Prize .

Little is known about his artistic work after the publication of his autobiography Von Kopf bis Fuß in 1965; a few books have appeared, all of which are out of print. Friedrich Hollaender was married to Leza Hay (daughter: Melodie, * 1944) for the third time from 1944 and to Berthe Jeanne Kreder for the fourth time from 1946.

Friedrich Hollaender was buried in Munich's Ostfriedhof (grave no. 60-1-20). A star in the Cabaret Walk of Fame is dedicated to him. A Berlin memorial plaque was unveiled on June 17, 2009 at the house at Cicerostraße 14 in Berlin-Halensee , which he had to leave in 1933 . In the Berlin district of Charlottenburg-Wilmersdorf , the former Rankeplatz was renamed Friedrich-Hollaender-Platz on January 18, 2012. Hollaender's estate is in the archive of the Academy of Arts in Berlin. 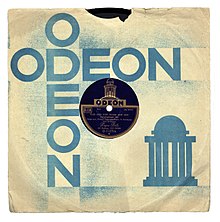