Martin Berger (born July 7, 1871 in Ratibor , German Reich , † after 1930 probably in Berlin ) was a German film director , screenwriter and producer . 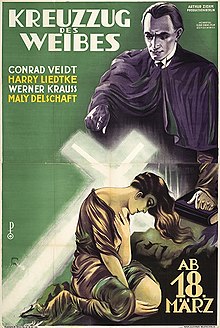 Martin Berger started out as an actor, director and director at the theater. From 1916 he worked for the film. After two films of his own, he wrote the screenplay for Otto Rippert's Indian love drama The King's Daughter of Travankore in 1917 . In November 1918 , Berger campaigned against a purely commercial orientation in film production and became a member of the “Association of Film and Cinema Members”. In the following year he joins the “Association of German Film Authors” and is a co-founder of the “Volksfilmbühne”.

After Mazeppa , Volksheld der Ukraine (1919) with Werner Krauss in the title role, Berger devoted himself to some socially critical films. His films Gesindel - Marodeure der Revolution (1919), which was also made in 1919 and propagated a system of councils , The Naked and Death Sentence , could only be shown if censorship requirements were met. By 1921 the actress Grete Ly had produced four of his films. In 1922, Martin Berger, who had previously been committed to socialist ideas, made a few short documentaries about the labor movement .

Berger attempted a fresh start with Die Schmiede (1924) and Free People (1925), but the film made in 1925 in particular was a financial disappointment. The subsequent melodrama Kreuzzug des Weibes from 1926 with Conrad Veidt , Maly Delschaft and Werner Krauss was Berger's greatest success. Friedrich Hollaender wrote his first film music for this film. The subject of the film is Section 218 of the Criminal Code . A termination of pregnancy in a poor family due to social need and in a rich couple who have a doctor's certificate for a medical indication written out is contrasted. The film, which was distributed by the proletarian distribution company “ Weltfilm ”, had to contend with applications for a ban because it expressly took a stand for abortion for social reasons. It was indexed in Bavaria and Danzig .

Martin Berger's subsequent films The Outcasts (1927), Rasputin's Love Adventures (1928), and Saints and Whores (1929) were found to be bad by critics. After his only sound film Verklungene Träume (1930), Martin Berger no longer appeared in film work.

Except for Woman's Crusade and Rasputin's love affair , all of Berger's films have been lost.