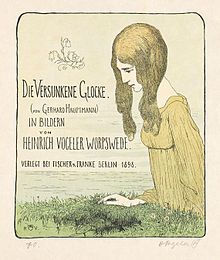 The sunken bell is a drama by the German writer Gerhart Hauptmann from 1896. During the poet's lifetime it was one of his most played pieces. The Sunken Bell is Hauptmann's first verse drama and marks the break with naturalism in his work . The play with the subtitle A German Fairy Tale Drama in Five Acts premiered on December 2, 1896 at the Deutsches Theater in Berlin . With its fairytale romance and mystical symbolism, The Sunken Bell is considered Hauptmann's first neo-romantic work. His departure from naturalism is said to have been a reaction to the failure of his previously published drama Florian Geyer . The music for the piece comes from Max Marschalk . In the premiere, Anna Trenner played the first wife of the bell founder .

The focus of the drama is the bell founder Heinrich. A new bell he cast, which was supposed to sound lighter than all the others, crashed while being transported to the church where it was to be hung and sank in a lake. Dyingly sick, Heinrich meets the fairy tale creature Rautendelein and heals through her magic and her kisses. He moves with her into the mountains and leaves his wife Magda and their children behind. Magda drowns herself in the lake, where she moves the clapper of the sunken bell. Heinrich hears the sound as the voice of his bad conscience. Finally Heinrich dies in Rautendelein's arms.

In the "Sunken Bell" there are some parallels to Friedrich Nietzsche , especially to his works Also sprach Zarathustra and Zur Genealogie der Moral . There are many parallels between the bell founder Heinrich and Hauptmann's biography. Just as Heinrich's efforts were not crowned with success, when he wrote this drama, Hauptmann was also facing the failure of his Florian Geyer , which had its premiere at the Deutsches Theater just under a year earlier. Like Heinrich, Hauptmann went new ways and changed his literary style. And like Heinrich, Hauptmann had separated from his wife Marie during this time, who had fled to America and later moved to Dresden because Hauptmann had met his future wife Margarete Marschalk , Max Marschalk's sister.

Initially, The Sunken Bell was a huge success and at the turn of the century the most played piece from Hauptmann's pen. At that time, the spirit world was particularly emphasized by critics and compared with the paintings of Arnold Böcklin . Over the years, the drama fell more and more into oblivion. Georg Hensel writes in his actor guide: "With its overexerted verses, its more artificial than artistic poetry and its confused mysticism, [The Sunken Bell] is now as lost as Böcklin's work". There are several settings of the drama, the most famous being the opera La campana sommersa by Ottorino Respighi , which premiered in 1927.