The second Dresden Johannisfriedhof is located in the Tolkewitz district on Wehlener Straße. With 24.6 hectares, it was the largest cemetery in the city until the Heidefriedhof was established in 1934 . Since 1911, the Tolkewitz urn grove, which is in municipal hands, has been attached to the Johannisfriedhof .

Chapel of the Johannisfriedhofs by Paul Wallot from 1894

Carl Wilhelm Arldt : The old Johanniskirchhof before its secularization in 1858

The first Johannisfriedhof was inaugurated in 1571 in front of the Pirnaischer Tor as the Johanniskirchhof of the burial church of St. Johannis after the Frauenkirchhof and the cemetery at the Bartholomäus Hospital had become too small. It was bought on a garden that the city council had bought from mayor Hans Walther for 400 guilders . Extensions followed in 1633 and 1680, when numerous victims of the plague found their final resting place in the cemetery. Another expansion followed in 1721, and the cemetery already contained around 3,000 graves, including the resting places of Johann Melchior Dinglinger , George Bähr , Gottfried Silbermann , Anton Graff and Johann Christoph Knöffel . The cemetery was closed in 1814 and fell into disrepair in the decades that followed, until the city decided to secularize it in 1854 . The cemetery was closed by 1858, and a few graves were moved to the Trinitatis and Elias cemeteries . The bones of George Bähr were transferred to the catacombs of the Frauenkirche, where they are still located today. The bones of the painter Johann Eleazar Zeissig were reburied in the cemetery of his hometown Großschönau and the column of his grave was also placed there. At the site of the first Johannisfriedhof and the Johanniskirche, which was demolished in 1860, Lingnerallee is today.

The entrance cross gate to the Johannisfriedhof

A new Johannisfriedhof was only built around 15 years later. In 1875 the Evangelical Church acquired forested land in what was then an independent Tolkewitz. Due to the sandy soil, this made it possible to build a new cemetery and served as a burial place for parishioners of the Kreuzkirche and Frauenkirche . The layout of the cemetery was controversial among the residents of Tolkewitz and Neuseidnitz and was accompanied by public protests.

When it was inaugurated on May 16, 1881, the Johannisfriedhof was the largest in the city. Its layout was based on other large city cemeteries of the time, especially the Vienna Central Cemetery, which opened in 1874 . The first funeral took place on July 17, 1881. Paul Wallot created a monumental for the cemetery chapel in the style of Neo-Renaissance , built 1894th The building ensemble consists of a parentation hall with a dome and two morgues. It was built from granodiorite and Elbe sandstone; the dome is covered with slate. Over the next few years, avenues planted with poplar trees were laid out in the cemetery; in 1909 a sandstone wall was built around the cemetery.

A jury that included Margot Käßmann , among others , presented the first “Bestattungen.de Award 2011” on November 8, 2011, and named the Johannisfriedhof as the most beautiful cemetery in Germany. The criteria for the selection were "an eventful history, a diverse design of the buildings and tombs as well as a special atmosphere".

The development of grave stones in the Dresden area can be seen in the cemetery. While tombs were initially made primarily from native types of rock, such as Elbe sandstone , over time these were displaced by foreign rocks. In the present, a multitude of grave stones can be found in the cemetery. Indigenous rocks include Cotta and Posta sandstone , Red Meißner granite , Lusatian granite and lamprophyr as well as Zöblitzer serpentine . International rocks include Russian Labrador (Ukraine), Silesian sandstone (Poland), Tönsbergite (Norway), Carrara marble (Italy) and limestones from France (Marbre de Boulonnais, Savonnières, etc.).

Individual tombs were created by well-known sculptors. The tomb of Georg Treu from 1904 and the angel figure for the grave of the Ahrenfeld family, which he made in 1894, were designed by Robert Diez . Paul Wallot created the grave of the Schweighofer family of actors , with the grave figure and grave medallions from Robert Diez. The Richter grave with a figure of Christ in Carrara marble was created by Franz Schwarz . Johannes Schilling realized the figures and grave medallions at the Julius Hermann Pilz grave, while the Schmidt Adensamer grave is the work of Arwed Roßbach (architectural design) and Max Klinger (artistic execution).

Grove of honor for the aerial war dead in Dresden (2009)

A central memorial with a memorial wall made of Varaza limestone commemorates 267 Czechoslovak and Polish resistance fighters, most of whom were executed in the courtyard of the Münchner Platz district court . In addition, 44 concentration camp prisoners from six nations and 65 forced laborers from three nations were buried in the Johannis cemetery. Some of them died in the air raids on Dresden.

After the Heidefriedhof , the Johannisfriedhof is the second largest burial place for the victims of the air raids on Dresden in February 1945: over 3,753 people, civil and military personnel, found their final resting place in the cemetery in collective and individual graves. Up to the present day rebeds are taking place, for example when the remains of aerial warfare victims are found during construction work. The burial place was redesigned in the 1970s to a grove of honor, with a memorial in the shape of a cross and a renovated central fountain. Since July 2014, a notice board at the Ehrenhain (including a QR code ) has provided background information on the memorial.

There are numerous graves of famous people in the Johannisfriedhof. At the entrances, cemetery plans provide information on the location of the individual grave sites of important people. The buried people include: 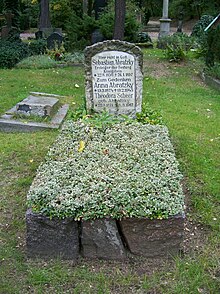 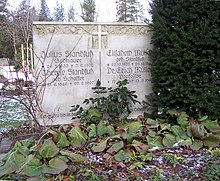