This article deals with the builder George Bähr. For other people, see George Baer . 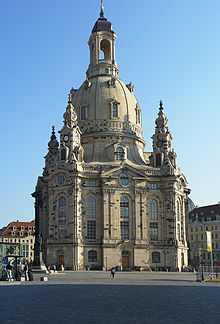 In 1693 Bähr went to Dresden, where he worked as a carpenter. He actually wanted to go to Italy to get to know famous buildings, so he studied mechanics on the side, called himself artist and mechanic, and designed organ prospectuses, castles and palaces.

At the age of 39, Bähr was appointed council carpenter in Dresden in 1705, although he did not have a master craftsman's certificate. Even in this office, Bähr tried to modernize the church building. In his opinion, the existing church buildings no longer did justice to evangelical worship.

George Bähr's first building was the parish church of Loschwitz near Dresden with an elongated, octagonal floor plan. The church was completed in 1708.

George Bährs grave in the lower hall of the Dresden Frauenkirche. (Implemented when the old Johannisfriedhof was dissolved in 1858)

In addition, numerous residential buildings were built in Dresden according to Bähr's specifications . Bähr himself lived in a house on Seegasse near the Altmarkt. Between 1732 and 1738, he oversaw the construction of the original of Matthew Daniel Pöppelmann designed Dreikönigskirche in Dresden-Neustadt.

Bähr's main work is the Frauenkirche in Dresden . In 1722 he was commissioned to do this, and in 1726 the design was approved and implemented. In 1734 the interior of the Frauenkirche was inaugurated. The church was completed on May 27, 1743, almost five years after the death of George Bähr, with the addition of a dome cross (which Bähr did not want) .

Bähr has been using the title of architect since 1730 - the fitting term civil engineer did not exist at the time.

His predilection for building organs led George Bähr to also perform compositions for these musical instruments.

In 1738, eight days before his death, as a result of an illness that confined him to bed, George Bähr resigned as council carpenter. He died the day after his 72nd birthday. Rumors of suicide have been refuted. Contrary to his wish to be buried in the Frauenkirche, he was buried in the Johanniskirchhof in front of the Pirnaischer Tor . When the city decided to secularize the cemetery in 1854 , at the request of a great-grandson, his bones were transferred to the crypt of the Frauenkirche, and the tomb was later transferred there.

George Bähr was married three times. He had six children with his third wife, Johanna Juliane Wahl, who was 22 years his junior and whom he married in 1730. When the first child was born (1730), Bähr was 64 years old. His student and brother-in-law was the builder Johann George Schmidt .

At the beginning of 2018, scientists from the University of Tübingen and the Max Planck Institute for the History of Man in Jena published the results of an analysis of the DNA of a skeleton from the crypt of the Frauenkirche, which is attributed to George Bähr. Based on the DNA analysis, George Bähr most likely had brown eyes, a light skin color and was genetically of Central European origin. However, the wrong bones were recovered in the Johanneskirchhof at the time, as the Dresden council archivist Otto Richter was able to show. The DNA analysis should therefore not be conclusive with regard to Bähr.

In Dresden today, George-Bähr-Straße ( Südvorstadt district ) is named after the famous architect of the Frauenkirche , which was destroyed in 1945 and rebuilt between 1990 and 2005. Streets are also named after George Bähr in Leipzig's “Architects' Quarter” and in Forchheim .

In 2008, the George Bähr Forum for Building Culture and Civil Engineering at the Technical University of Dresden , together with the George Bähr Foundation, awarded the George Bähr Prize, which is advertised throughout Europe and is endowed with 5000 euros. The award was originally supposed to be given every three years to architects and engineers who succeed in a special way in achieving a synthesis of design, construction and realization of a building. In particular, the award winners should do justice to George Bähr's work as a master builder. The prize was awarded in 2008 to the Berlin architect Henning von Wedemeyer for his work "Vilnius in the Air".