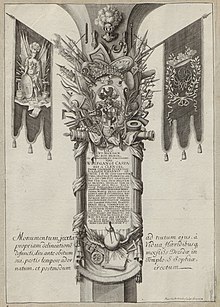 The builder Wolf Caspar von Klengel was born in 1630 as the son of the electoral councilor and chief tax accountant Caspar Klengel and his wife Sabina Elisabeth born. Fisher born. Klengel's maternal grandparents were the captain of the Saxon bodyguard Wolfgang Fischer and the granddaughter of the famous court architect Paul Buchner, who worked in Saxony .

Wolf Caspar was the middle-most of the family's three sons. The eldest brother, D. Christian Klengel , became the Saxon consistorial assessor and the youngest, Carl Klengel, is mentioned as an officer.

Wolf Caspar von Klengel had a thorough education at middle school level or even high school level. As part of the privately organized training, he learned good Latin and Greek as well as mathematics and drawing as modern subjects.

At a young age, on June 2, 1647, Klengel set out on his first trip abroad. It led him via Hamburg to Amsterdam , Leyden and The Hague . Via Brussels he reached Paris on May 16, 1648 , where he attended the military academy of the Duc de Beaufort during the summer. In addition to training in military engineering, he learned French and also dealt with contemporary journalism. He briefly returned to Dresden in 1650 via Rouen and Hamburg.

In 1651 Klengel set out on a long three-year trip to Italy that took him to Venice , Florence and Rome . In Rome he made friends with the famous Jesuit and polymath Athanasius Kircher .

After his return from Italy he was first appointed Oberlandbaumeister in Dresden in 1656 and later, in 1672, Chief Inspector of Civil and Military Buildings under the Saxon Electors Johann Georg II. (1613–1680) and Johann Georg III. appointed. He also acted as a supervisor of the electoral art chamber until his death, for which he purchased numerous works, including a painting by Peter Paul Rubens .

On April 16, 1664, Wolf Caspar was raised to the imperial nobility by Emperor Leopold I together with his brothers .

After his death, Wolf Caspar von Klengel was honored with a tomb he designed himself in the Sophienkirche in Dresden . After her death, his widow left 10,000 thalers from their joint property for a foundation in favor of converts to the Evangelical Lutheran faith and for Protestant religious refugees .

Klengel is considered to be the founder of Saxon baroque architecture and, in terms of art history, was the most important Saxon master builder in the 17th century alongside his subordinate Johann Georg Starcke . Significant parts of his drawings are now in Stuttgart. 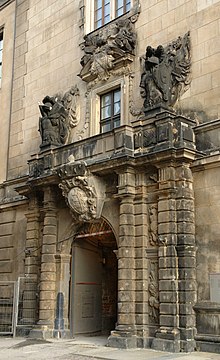 Klengel's first major project was to refurbish the electoral living and representation rooms in the west wing of the Dresden Residenzschloss . Some design drawings and small remains of the stucco furnishings have survived.

From 1664 to 1667 Klengel built the first permanent opera house in the royal city, the opera house on Taschenberg, next to the residential palace in Dresden .

In 1672 he built the chapel of Moritzburg Castle and created the furnishings that are still preserved today. Further works are the high house (today Spitzhaus) above the Hoflößnitz , in 1674/76 the elevation of the Hausmannsturm of the Dresden Residenzschloss including a baroque hood, in 1677/78 the electoral riding house at the Dresden Castle. Shortly before his death, he started the Green Gate on the north side of the Hausmannsturm.

Between 1675 and 1686 the electoral court stud Bleesern near Wittenberg and 1684–1688 the Trinity Church in Carlsfeld near Eibenstock in the Ore Mountains was built according to his design .

Probably Klengel also designed the building plan for the manor house of the Hohenprießnitz manor , which his brother Christian von Klengel (1629-93) had built in 1677-78, as well as for the village church in Eutzsch near Wittenberg, which was built in 1688 on behalf of the Wittenberg University. He was probably also involved in the design of the palace in the Great Garden in the 1670s , as there are numerous architectural motifs he liked to use here.

In 1688 he was in command of Sonnenstein Castle near Pirna and had it expanded into a fortress.

Memorial stone on the Körnerweg in Dresden