The Spitzhaus is a former pleasure house in the Saxon city of Radebeul . The building, visible from afar, is located on the slope edge of the Elbe valley above the Hoflößnitz in the Oberlößnitz district .

After the phylloxera appeared in the Lößnitz as a fiscal vineyard property in private hands, the Spitzhaus was rededicated and greatly expanded as an excursion restaurant. Radebeul's landmark, now a listed building, at Spitzhausstraße 36, has been used as an excursion restaurant with a wide view (height 241.3  m ) over the Elbe valley and as far as Dresden even after its renovation and reopening in 1997 . The Spitzhaus is 100 meters above the level of the Hoflößnitz. 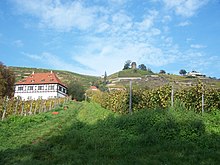 The original core structure, a two-storey, almost square structure with a length of around 9.5 × 9.5 meters and five arched windows on the valley side and a striking spire, can still be seen in the center of the building today. The former two-armed flight of stairs to the upper floor on the northern side of the entrance has long since disappeared. On top he has a curved tent roof with an octagonal roof turret with a copper tip.

In 1901, two-storey building wings were added on both sides of the core building, parallel to the slope edge, which were also equipped with arched windows and bay windows with curved hoods on the slope-side building corners . This reconstruction was still carried out “from the spirit of the original time”.

In the following year, the large, angular veranda on the valley side was built, which stylistically was only required to be functional, regardless of the historical substance. The executing company was Adolf Neumann's construction company . Originally made of wood, it was massively rebuilt in later years.

In 1922, secondary rooms were added to the building on the mountain side, which impaired the effect of the baroque outside staircase. Further extensions on the north side followed in 1928, as a result of which the outside staircase was demolished. The relief plaque at the entrance is made of sandstone with a frame made of cast stone, on which there is a representation of the historic Spitzhaus as well as the initials AF and the years 1622 and 1928 .

On the valley side, a large substructure was built in 1924 in the vineyard below the building, on the southwest corner , on which a terrace separate from the rest of the building was created.

During the renovation and reconstruction in 1997, the view of the valley was somewhat symmetrized.

The entire area of the Hoflößnitz on Spitzhaus stairs up to the Bismarck tower and 140 meters east-standing Spitzhaus stands as a monument preservation material entity ( Ensemble protection ) under monument protection . In addition, the whole, in the conservation area is considered Historic vineyard landscape Radebeul lying, outdoor and vineyard surface including vineyards Golden cars and Spitzhaus as a work of landscape and garden design .

Spitzhaus from the west side with a view of the Elbe Valley, engraving at the beginning of the 19th century 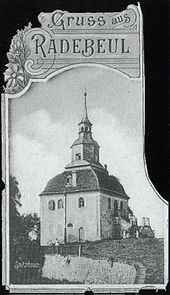 Pointed house from the northeast side, before the renovation in 1901

In 1622, Elector Johann Georg I is said to have built a small, almost square vineyard house in the style of the late Renaissance ( Mannerism ) on the site of an electoral outbuilding on a mountain spur above the Hoflößnitz . Due to its location on the mountain spur, the building was subsequently given the name Hohes Haus or skyscraper .

The vineyard property went to Colonel Bose, who managed the vineyard until 1657. In 1668 the Dresden businessman Paul Friedrich Landsberger acquired the property ( Landsbergischer Weinberg ). Around 1672 he had the building provided with a high, so-called Welschen tent roof, which, due to its resemblance to the roof of the Moritzburg Castle Chapel, was assigned to the builder Wolf Caspar von Klengel and gave the building the name Spitziges Haus . Landsberger's heirs, including Johann Friedrich Landsberger , took over the property in 1688.

Other owners were Baron von Rechenberg in 1699 , then the von Wolframsdorf family , after whom the associated vineyard was long called Wolframsdorfischer Weinberg , as shown on the map by Hans August Nienborg from 1714. The chamberlain Georg von Wolframsdorf donated the building on July 24th 1706 to the general of the cavalry and governor of the fortresses Königstein and Sonnenstein , Jacob Heinrich von Flemming , who gave it to the Countess von Cosel , whom he admired, the following year . It was passed on to its patron, Elector August the Strong , in 1710 . At that time, as one reads in old chronicles, the building was said to have been a bit shabby.

August the Strong planned to include the building on the electoral high-rise Vorwerk (von Hochhaus ), which was used for military purposes in times of war because of its strategic location, as a further pleasure palace in addition to Hoflößnitz Palace, where he received his party parties; but only under his son, Elector August III. , the building was redesigned in the Baroque style in 1749 according to plans by Matthäus Daniel Pöppelmann . During this renovation, it also received a new copper tower cover in place of the previous sheet metal and two chimneys inside, and the two-winged staircase to access the originally painted ballroom on the upper floor was added.

Pöppelmann also came up with the idea of ​​a 365-step annual staircase from Hoflößnitz Palace to the Spitzhaus, including the twelve platforms. 390 steps were even implemented, making it the largest baroque staircase in Saxony. At a length of 220 m, it overcomes 76 m height. This made the high house an easily accessible guest house for the Saxon electors, which was popular with visitors because of its unique view. In addition to the ballroom decorated with paintings, there were private rooms on the tower floor. The guest book, which is kept in the Saxon State Archives, names names such as Emperor Joseph II , King Charles X of France and King Otto I of Greece . Even William I of Prussia , then still crown prince and later German emperor, lived there.

From 1835 until his appointment as Bergvoigt on Hoflößnitz in 1863, Johann Gottlob Mehlig worked as a farm winemaker on the Hohenhaus . He wrote a five-volume diary about the "natural and world events", which is now kept as a rarity in the Radebeul city archive and is one of the important sources of regional history and the weather conditions of the Loessnitz wine-growing region .

After the official determination of the phylloxera disaster in Oberlößnitz in 1887, the time of viticulture was over for the time being and the royal cultivation areas were abandoned. The Sächsische Hof auctioned the tower-like pointed house in private hands in 1888 or 1889. The Striesen merchant Friedrich Herrmann Hennicke came into his possession in 1889 or 1898 and received a liquor license a year later. In 1901/1902 he had the Dresden builder Richard Beyer add the two wings with the corner cores, which gave the house its characteristic future appearance and expanded the capacity of the now popular excursion restaurant. The glazed veranda followed shortly afterwards. Numerous other modifications and extensions followed in the 1920s, and in 1928 the baroque outside staircase on the north side disappeared.

From 1960 the house was used as a holiday home by the state-owned fine stocking works in Oberlungwitz , which were later attached to the Esda stocking combine in Thalheim . The restaurant business was severely restricted at this time. Some of the verandas have been converted into rooms.

After the political change in 1990, it became a private restaurant again and after it was closed in 1995 it became the property of the city of Radebeul. In 1996, the Andreas family of restaurateurs acquired the well-known excursion restaurant by leasehold contract and reopened it in 1997 after renovation and renovation.