The Hausmannsturm of the Dresden Castle

The Hausmannsturm is the oldest part of Dresden Castle that still exists today and was started in its lower parts around 1400. It is located on the north side of the building complex. The octagonal structure is crowned by a copper-covered Welschen dome and an open lantern with a top. At 100.27 meters high, the tower is one of the most striking buildings in Dresden and a popular vantage point.

The origin of the Hausmannsturm goes back to a new main tower of the ducal residence, built around 1400. It was in close functional connection with a two-storey hall, which was then also newly built to the east. In the years 1674–1676, the architect Wolf Caspar von Klengel completed the tower in its current baroque form on behalf of Elector Johann Georg II . This northwest corner tower of the castle complex at that time was increased by 35 meters, making it 97 meters. In 1775 the first lightning rod in Dresden was installed here and at the same time the tower was enlarged to its current height of 100.27 meters, making it the tallest tower in the city until 1945. As a result of the air raids on Dresden , the Hausmannsturm lost its top. The tower stump was poorly covered in 1946.

The reconstruction of the castle and the Hausmannsturm was tackled by the GDR government in the 1980s, but until the political change in 1989, not even the west wing of the complex was finished. In 1990, the reconstruction began with larger financial resources. On September 27, 1991 the tower was rebuilt to a height of 70 meters. On October 1st, 1991 the tower got its top again. This copper spire, which is 30 meters high and weighs 21 tons, could be lifted up with a slewing crane on the third attempt . The weather vane alone is six meters high.

Tower from the castle courtyard with the dials of the clocks 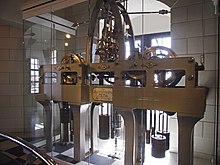 The court watchmaker Jean François Poncet (1714–1804) made 1741/42 on behalf of August III. , King of Poland and Elector of Saxony, the clockwork for the tower clock, which was commissioned in 1746.

In the Dresden bombing raid on 13 February 1945 , the clock was destroyed. As part of the restoration of the castle, the company Klaus Ferner, Turmuhrenbau Meißen, developed and built the tower clock with its clockwork, dials and hands from 1986 to 1996 . The bell set was acquired from the Dreikönigskirche .

The clock face of the court clock facing the castle courtyard has been renewed by reusing preserved fragments and, according to the historical model, has the small hand for the minutes and the large hand for the hours. In addition, the clockwork drives the four dials of the city clocks via a gear. The clock's pendulum is seven meters long and swings every 2.5 seconds.

During the Royal Saxon Triangulation of 1862–90, the Hausmannsturm was number 63 among the second-order measuring stations.

Via the visitor entrance in the west wing of the castle (Bear Garden Wing), you can climb the 222 steps to the viewing platform at a height of 38.62 meters, from where you can enjoy a wide view of Dresden.

The weather vane on the top of the tower bears the Hebrew lettering הֹוָה נִסִּי׃ ( Jehovah nissi ) after Exodus 17:15  OT : "And Moses built an altar and called it: The LORD my standard" ESV .