Friedrich August Georg Ludwig Wilhelm Maximilian Karl Maria Nepomuk Baptist Xaver Cyriacus Romanus of Saxony (born August 8, 1832 in Pillnitz ; † October 15, 1904 there ) from the house of the Albertine Wettins was King of Saxony from 1902 to 1904 . 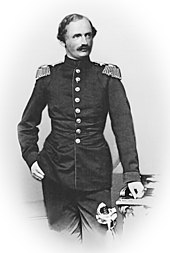 Portrait of King George on a 2-mark coin from 1903

Georg was born as the third son of Prince Johann of Saxony and Princess Amalie of Bavaria . In 1849/50 he attended lectures at the University of Bonn for about six months . He served his military service from May 1852 to October 1853 in the garrison in Radeberg , first as a lieutenant , then as a captain . In 1854 his father became king, making him second in line to the throne after his brother. From 1855 until his accession to the throne, he was chairman of the Saxon Antiquities Association , which did a lot for the preservation of monuments. In the German War of 1866, Georg commanded the 1st Cavalry Brigade of the Saxon Army . In the Franco-Prussian War he first commanded the 1st Infantry Division No. 23 and from August 19, 1870, after his brother Crown Prince Albert had taken command of the Maas Army, the entire XII. (I. Royal Saxon) Army Corps . He was in command of this corps until March 29, 1900. Georg represented Saxony when Wilhelm I was proclaimed German Emperor (" Imperial Proclamation ") on January 18, 1871 in the Palace of Versailles . In 1888 he was appointed General Field Marshal of the Prussian Army as the second Saxon . In 1873, after the death of his father and his brother's accession to the throne, he moved to the first place in the line of succession.

On June 19, 1902, at the age of almost 70, Georg succeeded his deceased brother Albert on the throne of Saxony. During his reign of only two years, during which he was extremely unpopular because, unlike before in a similar situation, his grandfather Maximilian did not renounce the throne in favor of his son Friedrich August , the textile workers' strike took place in Crimmitschau . As a result of an influenza that he contracted in the spring of 1904, the king died on October 15, 1904 in Pillnitz. He was buried in the New Crypt of the Catholic Court Church.

Georg married Infanta Maria Anna on May 11, 1859 in Lisbon , the daughter of the Portuguese royal couple Ferdinand II and Maria II. The marriage resulted in eight children: 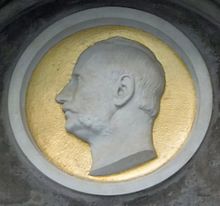