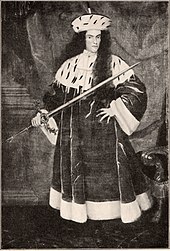 Johann Georg was the older of the two sons of Elector Johann Georg III. von Sachsen (1647–1691) from his marriage to Anna Sophie (1647–1717), daughter of the Danish King Friedrich III. The electoral prince had been carefully trained, was considered gifted and was involved in government business at an early stage. His cavalier tour took him to England, France and the Netherlands, and later to Italy. Unlike his younger brother, he is said to have been sickly due to stomach and bladder problems. In the field, Johann Georg proved himself on the emperor's side in the campaign against France .

Hans Adam von Schöning , who tried to bring Brandenburg closer to politics , acted as Johann Georg's political advisor . The elector's unhappy marriage to Eleonore , the widow of the Margrave of Brandenburg-Ansbach , also served this purpose . Domestically, attempts were made to push back the power of the nobility and the influence of the estates. Johann Georg continued his father's policy of economic consolidation and established a cadet school in Leipzig in 1692.

Schöning also came out against the Austro-friendly policies of Electoral Saxony, and when the Emperor ignored the Saxon subsidy demands of 400,000 thalers, Johann Georg IV withdrew his troops from the Rhine. For this reason Schöning was imprisoned by the emperor in 1692 during a spa stay in Teplitz .

Schiessalerklippe 1693 At the reception of the Order of the Garter

Johann Georg's anger over this was moderated with the elevation of his mistress to Imperial Countess of Rochlitz combined with a gift of money from the emperor of 40,000 thalers, and the elector renewed his alliance with Austria on February 2, 1693, albeit the negotiations on the release of Schöning continued persisted. After the devastation of Heidelberg , the elector personally moved to the Rhine at the head of 12,000 men .

The Emperor's efforts were supported by England. The envoy of King Wilhelm III. von England presented the Order of the Garter to the Elector on January 26, 1693 in Dresden (see coin), one of the most prestigious orders in Europe, with the expectation of a contribution to the fall of France. A rifle shooting took place on this occasion.

Johann Georg began a relationship with Magdalena Sibylla von Neitschütz (1675–1694) as early as his electoral prince's days, which he continued not only after he became elector of Saxony after the death of his father in 1691, but also after he became elector of Saxony on April 17, 1692 had married Eleonore von Sachsen-Eisenach in Leipzig . The Neitschütz family managed to gain influence in the electorate, even if Magdalene Sibylle herself stayed away from politics.

In 1693 he made his mistress Countess of Rochlitz. In the summer of that year she gave birth to a daughter, but died a year later; the peeling was given as the cause of death . The elector died shortly afterwards. Peeling was also diagnosed. However, there are now doubts about this cause of death and poisoning is being considered for both people.

He was succeeded as Elector of Saxony by his brother Friedrich August I , who, in view of the negative mood in the population and with a view to his finances, put the Neitschütz family (around 100 people) on trial. Under torture, Magdalena Sibylla's mother was accused of having "bewitched" the electoral prince and also having brought about the early end of his father.

The love affair between the Elector and Magdalena Sibylla von Neitschütz was incorporated by the writer Christian Friedrich Hunold in his novel The European Courts of Love and Heroes , published in 1705 .

From his connection with Magdalena Sibylla von Neitschütz, Johann Georg had a daughter born out of wedlock:

During his time as elector, Johann Georg IV had an animal garden built in 1693 not far from the Moritzburg hunting lodge to ensure that there was sufficient game population for the stately hunts . The Moritzburg game reserve developed from this facility .