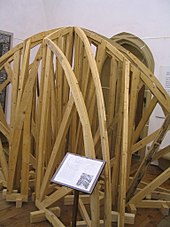 Falsework for building a rib vault 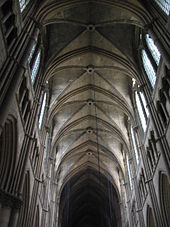 Under a vault rib , also called rib for short , ( English rib ; Italian nervatura ; French nervure ) is understood in the history of art an arched component of a vault made of natural stone that has a load-bearing function. Ribs are not always visible, but can lie inside or above the vault shell. Only the machined and mostly profiled part of the rib is visible.

The first ribs had a square cross-section ("ribbon rib"; e.g. San Baudelio de Berlanga ). In the further development, they were chamfered at an angle and then profiled behind the bevel ("valley rib"). The rib shapes developed into ever more extensive profile shapes with round bars up to the so-called pear bar , which shows a pear-shaped profile. In the late Gothic , ribs were also used decoratively and largely without a supporting function ( Tierceron , Lierne ) or they unfolded freely and detached from the vaulted shell in the room (see hanging ).

The on wooden falsework butted ribs of an arch support, in contrast to the vault cap , after insertion of the keystone itself. Only then is the fine masonry takes place the vault cap.