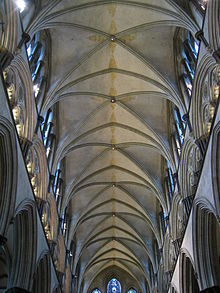 Four-part ribbed vault in the nave of Salisbury Cathedral

A rib vault is a vault that is formed and held by self-supporting ribs (cross ribs). The ribs cross each other like the diagonals in a rectangle; they divert the pressure and shear forces of the vault onto the pillars . Each cross rib is made up of several profiled stones . There is a keystone at the point where the ribs cross .

The ribbed vault is a typical element of Gothic architecture . It made high church spaces possible. Compared to the barrel vault , the walls were relieved and could be provided with larger window areas.

The - still late Romanesque - transept vault of the Speyer Cathedral (after 1081) is considered to be one of the first ribbed vaults .

A cross rib vault consists of the four rib arches, the corresponding four abutment points in the corners and the central keystone. Although the caps between the ribs were only designed as a filling system, static investigations have shown that the main load is surprisingly carried by the spaces between them.

Ribs and caps are usually not frictionally connected to one another and have their own load-bearing effect. The stable cross rib arches are hardly involved in the load transfer of the caps.

With the so-called skeleton construction , the vault ribs are first built on teaching arches . With the insertion of the keystone, they become frictional. Then the caps are made of brick or natural stone. In some cases, formwork can be completely dispensed with. 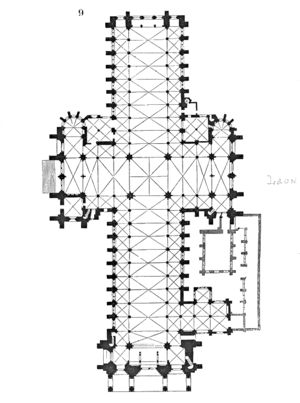 The ribbed vault enabled freer and more complex floor plans, a bound system with a six-part vault in the central nave of Laon Cathedral .

Shear forces in a cross vault 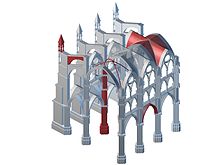 Ribbed vault in the architectural context of Gothic construction

Due to the construction of the ribbed vault, the church interior could be elevated. Compared to the barrel vault, it became possible to create much higher rooms. Builders no longer had to erect a vault on thick walls and side aisles to absorb the static forces . The wall walls could be designed to be flooded with light. The static forces could be transferred to the walls or pillars with greater room heights .

Furthermore, the arching was possible over rectangular ground plans and not just square ones. When using pointed arches , the floor plan was largely free, since different spans of the shield arches and diagonal arches do not necessarily lead to different heights of the arches as with round arches.

This not only meant less work was required for formwork, but the vaulted caps could be freely built between the cross ribs without having to create a complete wooden paneling as was previously the case. The design of room vaults became freer and less expensive than in the Romanesque.

With the construction of the cross ribs it was also possible to overcome the thrust , especially in the crown. The vault caps, which in the Romanesque were only arched radially and tied to the square floor plan, could now be built with different span, while the Romanesque round arches had to have the same span with the same apex height.

The basic shape with two intersecting ribs is called a four-part vault . If this vault is divided into six caps in the transverse direction by a rib going from the keystone to the outer walls, one speaks of a six-part vault , which is typical for early Gothic church buildings. When using the six-part vault, the so-called bound system is created , in which a central nave vault is assigned two aisle vaults on each side. If there is also a crown rib in the longitudinal direction, an eight-part vault is created. 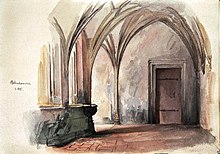 Ribbed vault in the cloister of Bebenhausen Monastery , watercolor by Eduard von Kallee , 1854

Cross rib vaults are similar in shape to the groin vaults previously developed , but they differ fundamentally in construction, as the ribs now took on a load-bearing function. The first cross rib vaults arose in the Romanesque period by placing a flat ribbon rib on the ridge (hence also called ribbon rib vault ), which initially had a decorative and structural function, initially not having a load-bearing function. The transept vaults of the Speyer Cathedral (after 1081) are the first Romanesque rib vaults . At about the same time, the cross-ribbed vaulting of Durham Cathedral was built around the same time, the first structure vaulted uniformly in all parts with cross-ribs. In this development phase, simple cross-sections shaped the rib shapes (square, almond-shaped, pear-shaped, etc.), from which the vault with load-bearing cross ribs developed.

Certain rib cross-sectional shapes were associated with individual monastic orders or individual monasteries. For example, the Konversen (lay brothers) entrusted with building tasks in the Cistercian monastery of Clairvaux preferred rib shapes with a square cross-section (the so-called box rib). These can also be found in all of Clairvaux's daughter monasteries. Through Clairvaux's Cistercian conversations, this rib shape also found its way into secular architecture, for example in the castles and fortifications of Frederick II in southern Italy ( Castel del Monte etc.).