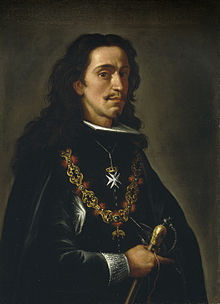 He was the most famous illegitimate son of Philip IV of Spain. His mother was the actress Maria Calderón .

In 1656 he became governor of the Spanish Netherlands , defeated as Spanish commander-in-chief in the Restoration War against Portugal on June 3, 1663 near Estremoz , then viceroy of Aragon , later first minister of Charles II.

He looked after his half-brother, the Infante Charles of Spain , born in 1661 , and taught him to read, write and many other things.

But Juan José de Austria made a fatal mistake beforehand. He wanted to with his half-sister Margarita Teresa (1651-1673) - the future wife of Emperor Leopold I get engaged -. But Philip IV was against it and excluded his son from participating in the reign.

As Viceroy of Aragon, he stood against the favorites of the Queen Mother Maria Anna of Austria several times and ran the business of government from 1676 until his death in 1679; through the fight against corruption, the establishment of the Junta de Comercio and the stabilization of the monetary value, he achieved the first improvements in the political and economic situation in Spain. He arranged the first marriage of Charles II with Marie Luise von Orléans in order to reduce the influence of the Queen Mother on the affairs of government.

He died like his father on September 17th and rests like him in Chapel 5 of the Pantheon of the Infants .

(Successor: Prince Eugene of Savoy , governor of the Austrian Netherlands)