Estremoz is a city in Portugal in the Évora district with just under 10,000 inhabitants. It is 450 meters above sea level.

The city is known for its marble and the local royal palace. In addition, Estremoz is listed twice by UNESCO as the home of intangible cultural heritage : the traditional craftsmanship of clay figurine production in Estremoz has been part of the Representative List of the Intangible Cultural Heritage of Humanity since 2017 ; Estremoz is also one of only seven districts ( concelhos ) in Portugal where Cowbells are made from the traditional craftsmanship of the Arte chocalheira , which has been on the list of intangible cultural heritage in urgent need of conservation since 2015 .

In the course of the Reconquista , the place was contested before it finally fell to Portugal under King D.Sancho II . Sancho II had the place re-fortified, and the fortifications were expanded during the tenure of the two subsequent kings. During the revolution in 1383 and the following war of independence, the population drove out the Spanish-friendly governor.

Estremoz was often the scene of armed conflicts in its further history. For example, during the War of the Spanish Succession in 1705 , the Count of Galveias gathered an army of 15,000 soldiers, 5,000 horses and 20 pieces of artillery here. In 1808 the French troops of General Kellermann conquered Estremoz during the Napoleonic invasions . The previous small town ( Vila ) Estremoz was elevated to a town ( Cidade ) in 1926 .

The old town is dominated by the castle on the mountain, whose keep , Torre de Menagem and the royal palace, in which Rainha Santa Isabel died on July 4, 1336 , was under King Afonso III. Begun in 1258 . Since the construction of the tower took the reign of three kings to complete, it is also called the tower of the three crowns . An explosion in the powder arsenal in 1698 destroyed the castle. Only the Paço da Audiência , a star-shaped vaulted room known as King Dini's audience room, and the Gothic colonnades remained. 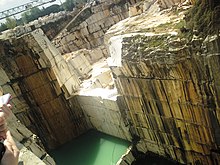 In the triangle Estremoz - Borba - Vila Viçosa , a finely crystalline, homogeneous marble is extracted in over 100 quarries , the color spectrum of which ranges from white cream to creamy rose to intense pink. Estremoz marble is used in high-quality interior design such as wall and floor coverings, stairs, washbasins, columns and fireplace surrounds.

The following municipalities ( Freguesias ) are in the Estremoz district:

Municípios in the Évora district