After the Reconquista in Portugal, the Portuguese branch of the Order of Calatrava , later the Order of Avis , received the area for settlement in 1211 . Mora was in 1519 the first town charter by King Manuel I. The Anta 1 da Herdade da Ordem is located in the district of Mora.

Mora is the administrative seat of a district of the same name. The neighboring areas are (starting clockwise in the north): Ponte de Sor , Avis , Sousel , Arraiolos and Coruche .

The following municipalities ( Freguesias ) are in the Mora district: 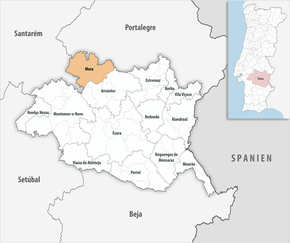 Until the line was closed in 1988, the place was connected to the country's rail network via the Ramal de Mora railway line . Cycle paths have now been laid out on the former railway lines .

The national road N2 leads from Mora about 40 km south to the A6 motorway at Montemor-o-Novo . The N251 national road, which also passes through Mora, connects the town with Vimieiro, about 35 km to the east, and Coruche , about 40 km to the west, both of which are on the N4.

Municípios in the Évora district