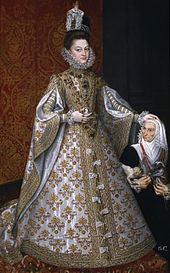 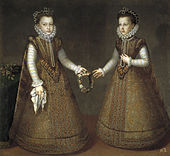 Isabell Clara Eugenia in a portrait by Sofonisba Anguissola , 1573

Infanta Isabella Clara Eugenia was the daughter of the Spanish King Philip II of Habsburg , son of Emperor Charles V , and Elisabeth of Valois . The mother had complications during childbirth and hovered between life and death for several days. Philip II, who is described in contemporary sources as a cold-hearted monarch, said after giving birth that he was more pleased with the girl than with a male heir to the throne. However, the Infanta lost her mother at the age of two and grew up with her younger sister Katharina Michaela at her father's Spanish royal court under the care of wet nurse Maria de Messa. After the early death of his third wife in 1570, the father entered into another dynastic relationship with his niece Anna of Austria , daughter of Emperor Maximilian II and his sister Maria of Spain . Anna von Österreich took care of the two girls and a close relationship of trust developed between the stepmother and her two stepdaughters.

The Spanish queen gave birth to the longed-for heir to the throne, Philip III, on April 14, 1578 after several children who had died in infancy . of Spain . The Spanish monarch could not transfer the deep feelings he had felt for his third wife to his fourth wife, nor could he develop a proper relationship with his children from the fourth marriage. His two daughters Isabella Clara Eugenia and Katharina Michaela of Spain became his most important confidants, who advised him, like his late wife Elisabeth von Valois, on important political issues.

He wrote the following to his daughters from Lisbon on January 15, 1582 : “I hear that you are all doing well - that is wonderful news for me! If your little sister [Maria (1580–1583), child from his fourth marriage] has her first milk teeth, it seems a little premature to me: it should be a replacement for the two teeth that I am about to lose - if when I arrive over there [in Spain] I will hardly have them anymore! If I can find no other reason to complain, then it should be fine with me ... "These letters were signed with" Your good father ".

The relationship with Isabella Clara Eugenia was particularly close. He called them the comfort of his age and the light of his eyes. She helped him with government affairs, organized his documents, read him important messages and translated Italian reports into Spanish for him. During the last three years of the king's life up to his death on September 13, 1598, she looked after her seriously ill father, who suffered from fever attacks and gout .

On August 2, 1589, Isabella Clara became Eugenia's maternal uncle, King Henry III. of France , murdered by the monk Jacques Clément . Henry, the last French king from the House of Valois , left no male descendants, any more than his brothers. Philip II therefore raised claims to the throne for Isabella Clara Eugenia, since she was the daughter of Heinrich's eldest sister Elisabeth. Legally, however, the Salic law in France excluded female succession, and Elisabeth of Valois had given up all claims to the French throne at her wedding. The rightful king according to the French inheritance law was the Protestant Huguenot leader Heinrich von Navarra , who in 1589 Heinrich III. followed in the midst of the Wars of Religion and was crowned in 1594 when Henry IV of France .

As part of the Habsburg marriage policy , Isabella Clara Eugenia was betrothed to Rudolf , the eldest son of Emperor Maximilian II , when she was three years old. After twenty years of engagement, however, Rudolf broke off the engagement. At the age of thirty-one, the Infanta became engaged to Archduke Albrecht VII of Austria (Albert), who had also been brought up at the Spanish court of Philip II. Archduke Albrecht, Rudolf's brother, was appointed Cardinal Archbishop of Toledo at the age of 18 . Philip II made his nephew Viceroy of Portugal in 1583 and Governor General of the Spanish Netherlands in 1595 . For his engagement, the Archduke was released from the Catholic Church by the Pope in 1598 .

Governor of the Spanish Netherlands

Isabella Clara Eugenia in a portrait by Peter Paul Rubens , 1609

The couple received the Catholic Spanish Netherlands as their bride's treasure from the Spanish crown. Therefore, Philip II transferred control of the Spanish Netherlands to Isabella Clara Eugenia during the betrothal. He ceded Flanders , Artois , Hainaut , Brabant , Cambrai , Limburg and Luxembourg to his daughter. Only in the case of the couple's childlessness should the dominion fall back to Spain after the death of Isabella Clara Eugenia.

King Philip II died in 1598. On April 18, 1599, after seven months of mourning, the Spanish Infanta married the Austrian Archduke Albrecht. During the marriage, which was described as happy, three children were born but died as infants: Archduke Philipp was born on October 21, 1605 and Archduke Albert on January 21, 1607, followed by Archduchess Anna Mauritia. According to contemporary reports, the duke couple married Joseph after the early death of their children .

However, the Archduchess made a weekly pilgrimage to St. Anne's Spring in Laeken to pray for an heir to the throne. She later rebuilt the path there and had the St. Anne's Chapel built in 1625 after the death of her husband.

The two settled in Brussels , the center of the Spanish Netherlands. The area extended south of the Rhine and Meuse into what is now Luxembourg and Belgium . De facto at that time only the southern half of the Netherlands was under the control of the Spaniards, the northern half ( see also the Eighty Years War ), also known as the States General , was in the hands of the Calvinist Dutch.

The Duke and Infanta tried to alleviate the misery of the previous years of the war. In addition, Albrecht negotiated a twelve-year armistice with the northern provinces in 1609, and court, social and ecclesiastical life flourished in and around Brussels. In 1609 Peter Paul Rubens was hired as court painter.

In April 1621, however, the twelve-year armistice expired, and Albrecht died in July. Since there was no heir, the Catholic Netherlands fell back to the Spanish crown. The young King Philip IV, who was now ruling there, was not looking for peace. Its chief minister, Olivares , sought to restore Spain's former great power in Europe and firmly believed that he could win a war against the northern provinces. So the peace talks that had already begun failed and the result were further long years of war.

From this time there is also a building visible today, which in terms of its dimensions comes close to the Roman Limes or the Siegfried Line, namely the Fossa Eugeniana . Isabella ordered the construction of a navigable canal between the Rhine and the Meuse, which on the one hand should cut off the provinces of the States General from trade and on the other hand also serve as a line of defense against the Dutch. The canal between Rheinberg and Venlo was 48 km long and had 24 fortified entrenchments . Large parts of it are still visible today. In a second expansion stage, the canal was even to be extended as far as the Scheldt . But due to the military successes of the States General, it did not come to that.

After Duke Albrecht's death in 1621, Isabella Clara Eugenia, now appointed governor of Spain, continued to rule alone. Despite the tense situation, she did not give up hope for peace and in 1623 sent the internationally experienced painter Peter Paul Rubens to The Hague to conduct secret peace negotiations with the States General under the guise of artistic activities and without the knowledge of Spain. These became public through Rubens' efforts, and a conference was held between Spain and the northern Netherlands. But this remained inconclusive as both warring parties insisted on their respective positions.

After the start of the Thirty Years' War in Central Europe with the second lintel in Prague , the war there expanded. Meanwhile, Isabella tried to contribute to peace in small pieces within her framework. At their behest, Peter Paul Rubens officially negotiated peace between England and Spain from 1627. He was successful and then tried again to get the States General to give in to Spain. This time he failed because of the stubbornness of The Hague.

After 1630, the army of the States General under Friedrich Heinrich , the city conqueror, gained significantly in areas on (formerly) Spanish territory. Even his successor, Cardinal Infante Ferdinand (victor of the Battle of Nördlingen ), could not prevent this.

Isabella Clara Eugenia died in Brussels on December 1, 1633, without success in her peace efforts, which are her historic achievement. After their death, the Spanish Netherlands reverted to Spain due to the couple's childlessness.

Isabella Clara Eugenia had a great interest in art and her court was a magnet for painters and artists. She particularly supported and encouraged her court painter Peter Paul Rubens, who also worked for her as an envoy and peace broker.

The legend of the origin of the color name Isabell is associated with the name Isabellas .

(Successor: Prince Eugene of Savoy , governor of the Austrian Netherlands)