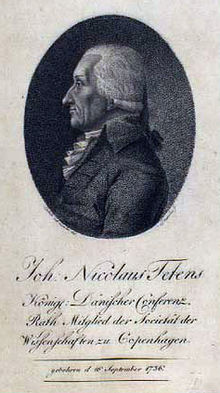 Johannes Nikolaus Tetens , Danish: Johan Nicolai Tetens (born September 16, 1736 in Tetenbüll , † August 15, 1807 in Copenhagen ) was a German-Danish philosopher , mathematician and naturalist of the Enlightenment . In the English-speaking world he is still called 'the German Hume ' today. His philosophical work had a great influence on Immanuel Kant , he is also considered a pioneer and founder of the psychology of the life span . After his time as a publicist and university scholar, the Schleswig enlightener made a career in financial management in Copenhagen.

Born the son of an innkeeper, Tetens studied mathematics and physics at the University of Rostock and Copenhagen. He received his doctorate in 1760 after having obtained a master's degree in Rostock in 1759. In 1760 his philosophical work on an epistemological problem appeared: Thoughts of some causes why there are only a few established truths in metaphysics , a year later his treatise: Treatises on the proofs of the existence of God . He applied to the newly founded University of Bützow and was appointed professor of physics here in 1763, but also taught philosophy. In 1765 he took over the rectorate at the local education department. There were important writings on linguistic research on the origin of language and writing , 1772 and 1775 on the philosophy of science on general speculative philosophy .

In 1776 he followed a call to the University of Kiel , where he taught mathematics and philosophy until 1785. During this time, his main work, Philosophical Experiments on Human Nature and its Development, was published . The work was preceded by the troubled Calenberg Witwencasse . Tetens was commissioned to test them. In this episode he wrote the two-volume work that became the basis of modern life insurance mathematics . He developed various auxiliary variables, such as the commutation values , in order to reduce sources of calculation errors.

In 1786 he broke off his academic career and traveled the North Sea coast to inspect the condition of the dikes . The result is the book Journeys in the North Sea Marshes , published in 1788 .

In 1789 Tetens moved to Copenhagen, where he entered the civil service and advanced from assessor at the finance college to director of the treasury.

He then became a deputy in the Finance College and co-director of the Royal Bank, the Deposit Fund, the Widows' Fund and Pension Fund in Copenhagen. There he published a book on widow care. In 1787 he became a member of the Royal Danish Academy of Sciences . In 1790 he was appointed Budget Council, 1792 Real Budget Council and later Conference Council.

In his main work Philosophical experiments on human nature and its development, Johannes Nicolaus Tetens tries for the first time to comprehensively portray psychological properties and their development over the course of a lifetime. He determines the absolute versus the relative intellectual ability and outlines what is called the two-component model of fluid and crystalline abilities in modern developmental psychology . He makes references to cognitive aging: The absolute abilities are more difficult to modify than the relative abilities , this is still possible even if the absolute abilities cannot be further developed.

Tetens was influenced by English empiricism through Christian Wolff , who referred to John Locke . He treated David Hume's work as one of the first in Germany. Through his phenomenalist point of view, he exerted a considerable influence on Immanuel Kant . His main work was particularly important for Kant's work on the Critique of Pure Reason (1781). Tetens partially shaped Kant's terminology, which appeared completely new to his contemporaries.

He strove for a "psychological analysis of the soul" using scientific methods. He wanted to determine the mental faculties, which he first differentiated into thinking, feeling and willing. Tetens was known to his contemporaries as the "German Locke".

His work on the philosophy of language became very well known. Tetens wrote numerous writings in the field of mathematics, physics, jurisprudence, psychology and philosophy. He is considered an important representative of the German Enlightenment.

In this work he tries to combine the empiricism of Hume with the German school philosophy ( Leibniz and Christian Wolff), an intention that he had in common with Kant. Today Tetens is much less present in the public consciousness than Kant.

Introduction to the calculation of annuities , 1785