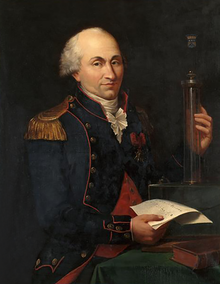 Charles Augustin de Coulomb (born June 14, 1736 in Angoulême , † August 23, 1806 in Paris ) was a French physicist and founded electrostatics and magnetostatics .

Coulomb's father, Henry, came from a distinguished family of lawyers and administrators in the Languedoc region , and his mother was Catherine Bajet. He grew up in Angoulême and, after the family moved to Paris, went to the prestigious Mazarin College in Paris. After his father lost his fortune in speculation, the parents separated. Coulomb initially stayed with his mother, but since there was a dispute that he wanted to pursue a career in mathematics and science, he followed his father to Montpellier . In 1758, however, he was back in Paris to prepare for the entrance exams at the state school for engineering officers Ecole de génie militaire de Mézières . He began to study there in early 1760 and graduated at the end of 1761 and began his civil service career as a lieutenant in the Corps de Génie, where Coulomb performed tasks as a civil engineer, for example in the repair of fortifications. First he was stationed in Brest and from 1764 in Martinique in the Caribbean, which had been temporarily conquered by the English in 1762 and should be fortified after the return from France. Until 1772, Coulomb directed the construction of the new Fort Bourbon. The fruit of this work was also a treatise on structural engineering, which he published in 1773 on his return to France in the treatises of the French Academy of Sciences ( Académie des sciences ), which attracted the attention of scientists such as his former teacher Charles Bossut . While stationed in Cherbourg , Coulomb wrote a treatise on the compass that earned him a prize from the Paris Academy in 1777. The treatise was also important because he dealt with the torsion balance (and the torsion of thin threads in general), which would later become the basis of his experiments on the measurement of weak forces.

In 1779 he was sent to Rochefort to help the Marquis de Montalembert, who was pursuing new ideas in fortification building that deviated from the classic line of Vauban , with the construction of a fort made entirely of wood. At the shipyards in Rochefort he carried out experiments that led to his treatise Theory des machines simples , in which he developed his theory of frictional forces. It earned him the grand prize of the Paris Academy of Sciences in 1781 and led to his acceptance into the academy, which made Coulomb independent. He moved to Paris and devoted himself to physical experiments, which led to his famous treatises on electricity and magnetism in the period from 1785 to 1791, but also to many other treatises. As an engineer, he only occasionally worked in an advisory capacity, for example in 1783/84, against his will, as an expert on port and canal projects in Brittany , which, however, led to disputes, as a result of which he also spent a week in prison. Coulomb was very active in the meetings of the Academy and published a lot, working closely with well-known scientists and engineers such as Pierre Simon de Laplace , Jean-Charles de Borda , Charles Bossut and Gaspard de Prony . The government also called on him for other tasks, such as the assessment of hospitals, which led to a study trip to London in 1787, or the water supply for Paris and the function of the water features in the royal gardens (1784).

After the outbreak of the French Revolution in 1789, Coulomb lost or resigned many of his offices (in 1791 he left the Corps de Genie). After the Academy of Sciences was dissolved in 1793, he retired to the countryside in Blois , where he owned a house and continued to experiment. It was not until 1795 that he returned to Paris with the establishment of the Institut de France , which replaced the Academy, and his election as a member of the Institute. Napoleon brought him back to the civil service as overseer of the country's education system from 1802 to 1806, where he promoted the establishment of new high schools (Lycée) throughout France.

Coulomb was married to Louise Françoise LeProust Desormeaux from 1802, with whom he had two sons in 1790 and 1797.

His scientific achievements are diverse:

In honor of the coulomb, the physical unit of the electrical charge is 1 C (one coulomb ). The Coulomb blockade , a moon crater and the asteroid (30826) Coulomb are also named after him.