Mohr's circle of tension and construction

The Mohrsche Kreis or Mohrsche Stresskreis, named after Christian Otto Mohr , is a possibility to illustrate or examine the 3D stress state of a point or a volume of constant stress .

For this purpose, a free cut is made on an infinitesimal volume, whereby the traction vector t becomes visible on the cut surface. This traction vector, also known as the stress vector, is broken down into its component (also referred to here ) perpendicular to the interface (the so-called normal stress component) and its component (also referred to here ) parallel to the interface (the so-called shear stress component ). Depending on the angle at which the cut is made, pairs can be calculated and drawn as points in a diagram. The set of all points is Mohr's circle. At him z. B. read the principal stresses, the principal stress directions or the greatest shear stress. This gives you a clear idea of ​​the volume used. In the case of strength criteria such as failure criteria , flow criteria or elasticity limits of isotropic , homogeneous materials, only the principal stresses are relevant. For some strength criteria, only the stress in the plane of the greatest and smallest principal stress is relevant. Even in the computer age, the Mohr's circle of voltages is often used to assess them, because it quickly provides a clear solution.

In addition to the Cauchy stress tensor, other symmetrical tensors can also be illustrated or investigated with Mohr's circle, e.g. B. the strain tensor . And besides Mohr's circle there are also other methods for illustrating symmetric tensors, e.g. B. Super squares or ellipsoids .

Mohr introduced the tension circle in 1882.

The state of stress on a particle is determined by the symmetrical Cauchy stress tensor , which is usually defined as a (2.0) tensor. A cutout can be made in any direction on this particle and through its immediate surroundings. The cutting stress vector t (traction vector) can be calculated on the resulting cut surface . The relationship between the stress tensor and the intersection stress vector t is

Figure 3: Relationship between the components of the stress tensor and those of the intersection stress vectors

The components of t in relation to the coordinate system can be calculated for any cutting direction:

The calculation for sections parallel to the coordinate surfaces is particularly easy . At is because of :

At is because of : 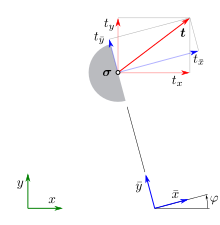 By inserting and with the help of the transformations

The construction of Mohr's circle is based on these two equations. For the example:

these formulas in Figure 5 are evaluated for 12 different angles.

Figure 5 does not show Mohr's circle, but rather illustrates the formulas for and . At each section you can see the section stress vector and its components acting there . Mohr's circle is obtained by plotting over - i.e. by drawing a diagram in which the pairs are shown as points. This is done in the following section.

For cuts parallel to the coordinate surfaces: 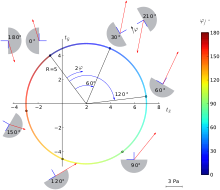 From the equations for and which is circle equation of Mohr's circle derived. Squaring both equations first yields:

And by adding these equations one gets the equation of a circle with radius R and center at (a, b), namely:

The center of the Mohr circle is at:

And the radius is:

Figure 7: Cutouts along the main stress directions and components of t for

There are several methods of determining the principal directions of stress.

In the special case is t for parallel normal unit vector n.

From the circular equation it then follows:

And for the example the positive cutting angles result:

Alternatively, the directions can be determined with the eigenvectors. The eigenvector that belongs to is the solution of:

The main stress direction for results from:

Now the (x, y) components of both eigenvectors are fixed. The angle between the x-axis and the first eigenvector is thus:

The second proper direction is rotated 90 degrees compared to the first, so that:

The unit vectors of the eigenvectors form an orthonormal basis that span physical space; these eigenvectors are denoted by. Since the stress tensor multiplied by the unit eigenvectors ( ) results in one of the principal stresses, they are also referred to in this context .

Mohr circles of tension in 3D

Figure 8: Mohr's circles for a three-dimensional state of stress. As can be seen in the picture, the three radii are calculated from the difference between two principal stresses.

The three-dimensional reality can be represented with 3 Mohr's circles of tension. There is an outer one that spans the plane of σ Ⅲ and σ I. Each traction vector must lie within the outer circle (or on the outer circle). Those stress combinations of normal stress and shear stress that lie within the inner circles cannot occur, which also means that there are only 3 normal stresses for which the shear stress is zero. In a state of stress where two principal stresses are zero, one circle degenerates to a point and the other inner circle is identical to the outer circle. In the case of a hydrostatic stress state, all three circles degenerate to one point, since there are no shear stresses and the same normal stress is present in every direction.

Determination of the normal vector or the traction vector

Figure 9: How to get the components of n constructively

One draws the three tension circles and the tension point (the point to which the traction vector T (n) should point) that is sought. This point must be between the three circles, if it lies exactly on a circle, the normal vector can be determined as with the 2D stress circle. A point of tension outside the outer circle or within one of the smaller circles cannot be assumed. By piercing in one of the three center points of the stress circles and subtracting the distance on one of the two circles with a different center point, you can determine double the angle to a main stress direction as in 2D . With this one can determine the normal vector:

One side of an equilateral triangle is spanned by the main normal stresses σ I and σ III . The distance between the point of just spanned triangle does not lie on the abscissa, and σ II corresponds to the von Mises equivalent stress .

The construction of the Mohr circle is done as shown in the adjacent picture according to the following scheme:

1. Cutting direction / cutting tension
Every point on the Mohr's circle in the figure in the construction section corresponds to an intersection angle , see figure 5 , on the one hand the angle between the x -axis and the normal unit vector n  - counting positively counterclockwise starting from x (in figure 5). On the other hand, in Mohr's circle, or the picture in the construction section , the angle between and the point that matches the respective cutting direction  - counting positively starting from clockwise.

For each predetermined cutting angle to read in Mohr's circle components of matching to this cutting direction average voltage vector from. These components are the pair that can be read at the point .

3. Principal directions of stress
The two associated main stress directions are perpendicular to each other. It is therefore sufficient to read off the corresponding direction. This is given by the cutting angle , i.e. H. half of the angle or the blue dashed line between and . This line / direction is the main stress direction. The direction in which the free cut is made is perpendicular to it. It is given by the blue dashed line between and .

4. Extreme values ​​of the shear stress
The radius of the circle is the greatest occurring shear stress, i.e. H.:

Then these components can be determined by a cut under  - and a second cut under , because:

Comparison with the equations for and from section # (n, m) components yields:

This result is equivalent to the result from the last section, see also the picture in the paragraph Tensor components from two sections .

Often this result is also written as:

Conversion of geometrical moments of inertia

In order for these maps to apply regardless of the choice of coordinate system, the components of the stress tensor must meet the following transformation rules:

Completely analogously, for a profile bar, between bending moments and curvatures (based on the neutral axis) with the area moments of inertia is defined as

The moments and the curvatures transform like pseudo vectors - i.e. like vectors when the coordinate system is rotated. And that is why the transformation rule for the area moments of inertia is:

Program to try out 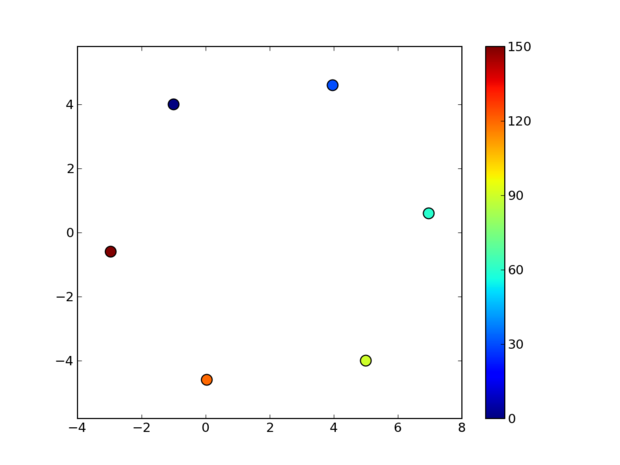 Fig. 14: Plot of some pairs , generated with the program shown here

with Matplotlib and NumPy