Distortion tensors are dimensionless second-level tensors that describe the relationship between the instantaneous configuration and the initial configuration during the deformation of continuous bodies and thus the change in the mutual positional relationships of the material elements. This change ( deformation ) of the internal arrangement corresponds to a change in the external shape of the solid and is thus visible , for example, as expansion , compression , shear , etc. The strain tensors are an essential parameter in the description of the kinematics of deformation. In continuum mechanics a number of different strain tensors are defined, the naming of which is not uniform.

The strain tensors are mainly used for the formulation of material models, e.g. B. the hyperelasticity used, which establish a relationship between the stresses in the material and its deformations. Such material models are used to calculate deformations of bodies.

A large number of strain tensors which are formed from the deformation gradient are known in the literature . The displacements

introduced as a difference vector between the current position of a particle and its starting position , with as the material coordinates of the particle with respect to the standard basis . The displacement gradient

where 1 is the unit tensor . First of all we can use it to calculate the right Cauchy-Green tensor

regarding the initial configuration and the left Cauchy-Green tensor

with respect to the current configuration. These two distance sensors are symmetrical and, in the case of a non-deformation, they are equal to the unit tensor.

For engineering applications, however, quantities are usually desired which represent a zero in the event of non-deformation . This leads to definitions of the Green-Lagrange strain tensor

or the Euler-Almansi strain tensor

In addition, there is a large number of other similar definitions, each of which has its justification and advantages in different theories, see below. This explains the factor ½ that occurs above.

In the case of small distortions, the last term can be neglected and this creates the linearized distortion tensor

A tensor E is a suitable distortion measure if it fulfills three requirements:

The polar decomposition of the deformation gradient F = R · U = v · R cleaves the deformation locally in a pure rotation, mediated by the orthogonal rotation tensor R (with R · R T and the determinant det ( R ) = 1), and a pure stretch, mediated by the symmetrical positive definite right and left distance sensors U and v, respectively . The latter are used to define a large number of strain tensors.

which result for different values ​​of the parameter satisfy the conditions of the general definition. The following table lists some common values ​​of corresponding tensors:

The names used here come first in italics . In the spatial description the correspondences result:

Description of some strain tensors

The Green-Lagrange strain tensor is motivated by comparing two material line elements and in the point , see figure on the right:

In one direction there is about

If is in the initial configuration, the following is calculated:

With then results for the shear γ :

can be motivated analogously to the Green-Lagrange strain tensor from the comparison of two material line elements and in the point :

For the stretching in one direction we get:

The Hencky distortion tensor is calculated using the principal axis transformation of the right-hand distance tensor . Because this is symmetrical and positive definite, its spectral decomposition reads

where λ i are all positive eigenvalues and the eigenvectors of normalized to one and orthogonal in pairs . Then the Hencky strain tensor is calculated

His trail is because of

a measure of the compression in place. If the distortion is small

which is why the trace of the displacement gradient or the linearized strain tensor then takes on this role.

The Piola and Finger strain tensor 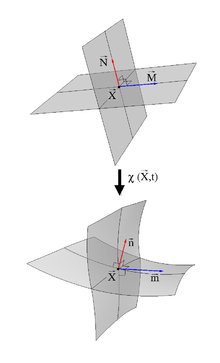 The Piola strain tensor is motivated by comparing the normal vectors to material surfaces. A family of surfaces can be represented by a scalar function

and an area parameter can be defined. The normal vectors to these surfaces are the gradients

In the course of a deformation it becomes

are related. The comparison of the scalar products of the normal vectors in the deformed and undeformed position in a material point leads to the Piola strain tensor

which is therefore a measure for the deformation of the material surfaces. The Piola strain tensor operates in the initial configuration.

Its counterpart in the current configuration is the finger tensor

All real materials are more or less rate-dependent, i.e. their resistance to deformation depends on the speed at which this deformation is brought about. Distortion rates are used to describe such a relationship. The material behavior is observer invariant , but most time derivatives of the distortions are not. However, a number of distortion speeds have been defined that are observer-invariant.

The right stretch tensor is objectively related to the body , which means that it is not influenced by a change in the reference system. The same also applies to its material time derivative. Accordingly, all distortion speeds formed from this time derivative, e.g. B.

objectively related to the body.

In the spatial description it can be shown that the left stretch tensor is objective, but its rate is not. The spatial velocity gradient is used for the formulation of objective rates of the spatial distortion tensors

Is called spin or vortex tensor . Then the (objective) covariant Oldroyd derivative of a tensor reads :

For the Euler-Almansi tensor e it holds in particular

The contravariant Oldroyd derivative of a tensor is defined as: