Frederick Winslow Taylor (born March 20, 1856 in Germantown , Pennsylvania , USA , † March 21, 1915 in Philadelphia ) was an American engineer and is considered one of the founders of ergonomics . Among other things, Scientific Management comes from him and what is known as Taylorism is based on his work . He is also the inventor of high-speed steel , which made him more famous in Europe than his Scientific Management during his lifetime, and an early researcher in the field of machining .

Taylor was the son of the lawyer and wealthy Quaker Franklin Taylor. His mother, Emily Winslow, came from the Delano family, which included Franklin Delano Roosevelt . Even as a child he is said to have attracted attention due to his strong tendency to experiment and analyze very carefully. As a teenager he traveled to Europe for concerts, operas, visits to historical sites and museums. He learned ancient languages, as well as French and German, and was preparing for the entrance exam to Harvard University at Phillips Exeter Academy , which he passed with distinction. However, headaches caused by myopia caused him to abandon the curriculum. Even a later correction of the eyesight with glasses changed nothing in the decision.

In 1874 he began an apprenticeship as a toolmaker and machinist at the Enterprise Hydraulic Works in Philadelphia . After completing his training, he could not find a suitable job and therefore joined Midvale Steel as a worker in 1878 . Under the special protection of his parents' friend, the president of the steel mill, William Sellers, and finance director EW Clark (whose son Taylor's sister was married), he quickly advanced from henchman to workshop clerk, then to lathe operator, foreman and foreman. In addition to his work, he completed an engineering degree at the Stevens Institute of Technology (1880–1883) via distance learning, which was a novelty at the time. In 1884 he became Chief Engineer at Midvale based on this knowledge.

The first trials of his ambitious rationalization attempts at Midvale not only showed success, they also led to conflicts with management. The propagated by his work office presented the claim to power of management line in question. He left Midvale Steel Mills in 1890 to take over the establishment and operation of paper mills for Manufacturing Investment Co. as general manager . At this company he mainly dealt with accounting issues. In the recession year of 1893, his expiring contract was not extended.

Taylor chose to work as a management consultant . Henry Gantt and Carl Georg Barth were among his employees during the phase . An important task for the rest of the biography was the rationalization of the control of ball bearings at Simonds Rollig Machine Co. in Fitchburg . He succeeded in reducing the daily working hours as well as lengthening and structuring the break times, overall with a reduction in working hours of more than 20%, to improve the productivity of the workers and thus the department on the one hand and, as a result, the wages of the employees on the other hand .

In 1895 he gave his lecture on a piece-wage system at the American Society of Mechanical Engineers (ASME) and became widely known in specialist circles. In 1898 he was asked to apply as a consulting engineer there by a former supervisor at Midvale who had meanwhile moved to Bethlehem Steel . With this assignment, he got the opportunity to carry out extensive time studies and, among other things, to carry out the studies on shoveling and iron loading, which later became particularly well-known, as well as technological experiments that resulted in numerous patents. In 1901 he was dismissed without notice with top management after persistent differences over his proposals for wage increases and changes to the organization of the bookkeeping.

Because of increasing health problems, among other things, Taylor decided in 1901 that "he could no longer afford to work for money." Taylor earned his living from his industrial holdings and the income from the patents he developed, especially the foreign licenses for high-speed steel . For the invention of the Taylor-White process to increase the strength of steel, he received a gold medal at the Paris World Exhibition in 1900 . Overall, he developed a large number of patents, especially in steel processing. He withdrew strongly to his newly built house and invited there to lectures which, after the name of the house, became known as the Boxly Talks. He wrote other writings and began teaching his scientific management as a private lecturer at universities and colleges. From 1909 to 1914 he taught Scientific Management at Harvard University . 1906 awarded him the University of Pennsylvania , the honorary doctorate .

In Shop Management , Taylor still referred to his system as process control . The term Scientific Management was coined later and not by him, but by the lawyer Louis D. Brandeis , who gave a lecture to the Interstate Commerce Commission (ICC) in which he showed that the American railways through the introduction of Scientific Management A nationwide interest in Taylor's teaching had unleashed a nationwide interest in savings of around $ 1 million a day.

Taylor was one of the early members of ASME and was the first to present his works A Piece Rate System and Shop Management at ASME congresses. From 1906 to 1907 he was its president. Around 1908, under the pressure of significantly increased membership numbers, ASME began to concentrate more on purely technical issues. This was expressed, among other things, after a delay of one year, in the decision not to publish Taylor's book Scientific Management . Under the leadership of Frank Bunker Gilbreth , a group split off as the Society to Promote the Science of Management , which became the Taylor Society after Taylor's death . She is considered a role model for the Institute of Industrial Engineers . In Germany, REFA follows this tradition.

Taylor won in 1881 at the first American tennis championships ( US National Championships ) together with his compatriot Clarence Clark the title in the men's doubles. 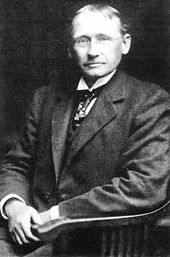 After leaving Bethlehem and through his lecturing and publishing activities, Taylor quickly became known, quickly got a large number of students, but also imitators and critics. Criticism was based in particular on unqualified imitators and an incomplete reception of his thoughts. Attempts to introduce time management in state arms factories led to strikes, and finally in 1911 to the establishment of an investigative committee of the US Congress . In 1914, the Federal Commission on Industrial Relation commissioned an investigation that became known as the Hoxie Commission (after the economist Robert Franklin Hoxie ). As a result, Taylor should work more closely with the unions - which he strongly opposed. The approval of funds for his time studies in state enterprises was refused.

With increasing awareness, Taylor had to defend himself and his thoughts more and more often against insinuations and a superficial reception, especially with reference to the principles of division of labor established by Charles Babbage (see: Taylorism ). This also affected his health, and in 1915 he died of complications from pneumonia.

Taylor is the founder of Scientific Management , also known as Taylorism . His teaching is based on precise time and work studies of people and their implementation in planned processes as well as the careful selection of the person who is suitable for this work. The aim is to determine the “only correct” (“one best way”) sequence of movements for every human activity. His work gave the rationalization movement , which was particularly pronounced in the 1920s, essential impulses.

In Germany, the Reich Committee for Working Time Determination ( REFA ) was founded in 1924 from the Association of German Engineers in order to systematically process Taylor's and other ideas for application in Germany, to coordinate with the collective bargaining parties in order to reduce social unrest and to spread them through teaching.