Energy conversion and heat during machining 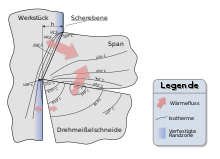 Energy conversion and heat during machining have an important influence on the resulting temperature and wear during machining . The mechanical energy that is supplied to the working point during machining is used to perform cutting, shearing and friction work. It is almost completely converted into heat . Most of the heat remains in the chip , while smaller proportions go into the tool and the workpiece. The high temperatures of 300 ° C to over 1000 ° C favor thermally activated processes such as diffusion and thus contribute to tool wear. The temperature measurement is a particular challenge, as the temperatures occur in a very small space, are very high and can change very quickly. Measurements in which the tools are used as thermocouples and those with pyrometers and thermal imaging cameras have therefore become established.

And the average labor or energy to the cutting path to

The mechanical energy supplied is used to do work during chip formation . A fundamental distinction can be made between the work of friction and the work of deformation. The work of friction is used both to overcome the friction between the chip and the rake face of the tool and the friction between the workpiece and the free face of the tool. The work of deformation is used to separate the chip from the workpiece and to shear it off. In addition, a very small proportion of the total energy is required to deflect the chip. A very small proportion is stored as elastic energy and residual stress in the chip and in the workpiece. Most of it, however, is converted into heat.

Analytical estimation of the energy shares

The size of the respective energies can also be roughly estimated using analytical methods. The shear plane model is used for this, which is based on the so-called free orthogonal section. Only the main cutting edge is engaged (free) and the tool setting angle is 90 ° (orthogonal). It is also assumed that the forming takes place exclusively in the shear plane. The traversed by the clamping area is defined as shear area referred to and the angle between it and the tool cutting-edge plane with . However, it is not the absolute energies that are of interest here, but the specific cutting energy, as the cutting energy related to the chipped volume . The cutting performance also results from the metal removal rate as . It can be shown mathematically that the specific energy is identical to the specific cutting force . It results from the sum of the various energy components

Here, the portion that is required for the forming in the shear plane is the one for the rake face friction (based on the rake angle ), that for the cutting work, that for the material deflection and that for the internal stresses. With the values ​​typical for industrial practice when cutting steel, the values ​​for the specific energies for forming and friction are each several hundred Newtons per square millimeter, the others in the order of magnitude of one Newton per square millimeter. These values ​​are therefore about 40% lower than according to the Kienzle formula, which has been confirmed experimentally . The reason for this lies in the simplifications of the shear plane model. The deformation actually takes place, for example, in a spatially extended shear zone. The proportions for the cutting work and the material deflection are becoming considerably more important for micro-cutting with chip thicknesses of around 10 nanometers and high-speed cutting with cutting speeds of around 10,000 m / min.

The time required for the transformation of specific energy results from the shear plane, the shear stress acting in it and the share of tension velocity perpendicular to the shear plane to

Because of the upsetting of the chip thickness , the surface on the chip is

From this the specific energy for the material separation can be calculated:

The energy required for material deflection can be estimated by applying the principle of momentum for pipe flows to the machining process. The energy results from the density (not to be confused with the friction angle, which has the same symbol)

The energies that are used to build up residual stresses can be estimated using Hooke's law . It is assumed that the material behaves like a spring that is in a uniaxial state of stress. The specific energy can then be calculated using the yield point and the modulus of elasticity .

The important energy conversions, the transformation and the friction generate heat . Only in the case of the less significant effects there is no heat, but elastic spring energy. The most important zones in which heat is generated are therefore the shear zone and the friction zone on the rake face. The free surface friction and the separation zone on the cutting edge are of little importance. Around 50% to 75% of the heat is generated in the chip, of which around 95% remains there. Another 18% occurs as frictional heat between the chip and the tool. Because of the high cutting force, high deformations also occur on the underside of the chip, which are even greater than those in the shear zone. Therefore, a large part of the heat is generated there. However, since this flow zone is very thin on the underside of the chip, less energy is converted than in the shear zone. The proportion of frictional heat that migrates into the tool depends on the contact time between the chip and the tool, so it is lower at high cutting speeds. At low cutting speeds of 25–75 m / min, the energy share in the chip is around 25–50%. The proportions in the tool are then around 65% to 85%. The rest is accounted for by the workpiece. At cutting speeds from 250 m / min, the proportions change only insignificantly. About 80% of the chip and a further 10% remain in the workpiece and tool.

Calculation of the heat flows

- the area through which the heat flow flows,

- the thickness of the layer that is heated,

- the temperature in the swelling volume (chip, shear zone) and

- the temperature in the adjacent body (workpiece or tool).

In addition, it is approximately the case that the mechanical power supplied corresponds to the sum of the heat flows.

with as heat flow in the chip.

When machining with a continuous cut, such as turning and drilling , the rake faces heat up so much that their temperature on the surface corresponds to that of the underside of the chip. Since the expression is then zero, the heat flow is also zero. When machining with an interrupted cut, as with milling , each cutting edge of the tool only has brief contact with the chip and therefore does not heat up as much.

The temperature in the shear zone arises from the heat capacity , the density and the specific cutting energy to

. With values ​​that are typical for industrial machining of steel, the result is a temperature of around 500 Kelvin above the ambient temperature. The heat flow into the workpiece is therefore about 250 joules per second.

The heat flow into the chip can be calculated using the heat capacity and the material removal rate Q:

This results in a heat flow of around 750 joules per second.

During the continuous cut, the supplied amounts of heat heat the respective bodies until the supplied heat is equal to the dissipated. Then an equilibrium is established, with constant temperatures. In the case of an interrupted cut, the cutting edges cool down again between two cuts, resulting in a periodically fluctuating temperature curve. The highest temperatures occur on the rake face of the tool, but not directly on the cutting edge, but somewhat behind it. When cutting steel, they are around 350 ° C at low cutting speeds and up to over 1100 ° C at around 200 m / min. However, the relationship between temperature and cutting speed is not linear in the low and medium speed range because of the built- up edge formation . The heat is then passed on in the tool, so that a temperature field is formed. The temperature on the flank is about 200 ° to 300 ° lower than that on the rake face.