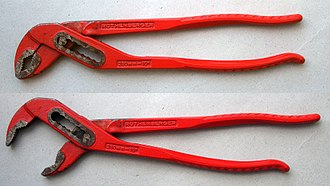 A pipe wrench is a gripping tongs with adjustable slip joint, so that different sized opening widths can be set of the mouth for gripping different sized workpieces. The gripper jaws are usually toothed. The water pump wrench is often incorrectly assigned to the pipe wrench or referred to as a pipe wrench , although it clearly differs from this due to its design.

Their German name comes from the fact that they were originally used to tighten the stuffing boxes on water pumps in motor vehicles. Another explanation is that the pliers allow a mode of operation that is similar to the movement of a hand water pump. In English they are known as 'tongue-and-groove pliers'. Due to their universal applicability and a very simple structure, they are among the most common types of pliers. The most common size is around 250 mm.

The development of water pump pliers is still in motion today. In particular, the design of the connection between the two pliers legs and thus also the type of opening width adjustment are constantly finding new forms: 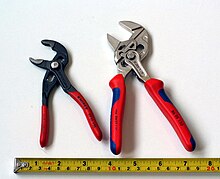 A modification of the water pump pliers is the pliers wrench - with smooth jaw surfaces that are parallel to each other in every setting position - for play-free and therefore gentle gripping of polygonal screw heads and nuts of various sizes.