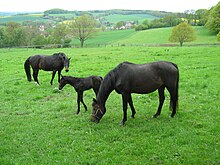 Under Horse breeding refers to the planned and thoughtful growth of horses with the aim of health, performance and readiness and certain racial characteristics to maintain or improve. Waldemar Seunig formulated the breeding goal as early as 1943: "The ideal to be striven for by the breeder is to create a horse of such perfect health and harmony between outer and inner life that all forces remain free for wanting and working in the service of man."

Since only animals should be used as breeding horses that correspond as closely as possible to the breeding goal of the respective breed, a selection must first be made. Selection criteria can be: 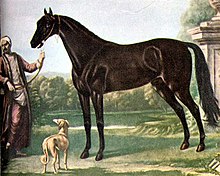 The stallion Byerley Turk around 1700

Horse breeding has a long history and, according to the current state of knowledge, begins between 5000 BC. BC and 3000 BC Chr. About the same time in different areas of Europe, Asia and North Africa. The use of horses increased the mobility of the people who used them. At the same time, domestication led to a greater intermingling of the horse races, as humans always tried to use the breeding material that seemed best to them from the races found in the larger sphere of activity. It is extremely difficult to pinpoint the exact time of domestication because there is little evidence by which a domesticated horse can be distinguished from a wild horse. Normally you have to rely on finding everyday objects such as bridles and saddles . Initially, the main purposes of use were probably the transport of loads and meat production; soon riding and field work were added. Today there are hundreds of different horse breeds that have conquered almost all habitats with humans. A decline in biodiversity has been observed since the middle to the end of the 20th century . The reason for this is the elimination of a number of areas of application due to advancing industrialization .

Recent studies based on the evaluation of the mitochondrial DNA of today's domestic horses and fossils of extinct breeds indicate that the domestication of the horse did not take place in one place but in several places independently of one another. An essential indicator for this is the breadth of the genetic variations, which is the same in both test groups. With only one place of domestication, a smaller genetic range of variation would have been expected in domestic horses. In addition, these tests found that some of the fossil finds were more closely related to today's races than some of today's races were to each other.

In the Franco-Prussian War of 1870/71, around a third of all German horses perished because they had been used in the interests of the mobility / speed of the German armies. As a result, the German princes agreed on a race distribution in order to be prepared for the next war through a broad distribution of the races important for the warfare. For this purpose, the state stud farms were given the stallion monopoly in order to primarily breed a certain breed in each German state. Even if the stallion monopoly could not be enforced, it was about half of the horses that could be bred accordingly. At the World Exhibition in Paris in 1900 , these uniform breeds were presented internationally for the first time.

This would also explain the strong divergence of some of today's breeds , such as ponies , cold-blooded and thoroughbreds , since the breeders not only had the domestication period for the different development of the breeds, but could also fall back on the genetic material of breeds that existed long before.

The technical term for stallions is generally sire or parlor stallion, the stallions used at a state stud are known as state stallion.

At the beginning of horse breeding one can hardly speak of a systematic breeding of today's form. The animals available were simply crossed with one another as they pleased. Animals from distant areas were often crossed in through trade or raids. The end product was rather random. The races largely corresponded to the natural races found in the respective area.

Today, horses are usually only allowed to breed if they are included in the herdbook of the respective horse breed . For this purpose they are presented at breeding shows . Stallions have to be licensed .

Warmblood breeds usually have an open stud book , which means that even horses whose parents are not registered can be included in the stud book if they meet the requirements of the breeding goal of the respective breed. With the help of the breeding value estimation , the performance of the breed can be improved.

In the pure breeding process, only animals of the same breed are paired with one another. In this case one speaks of a closed stud book . Breeds that are bred using this method usually have a consolidated population. This means that most animals are quite similar in terms of appearance and character traits and there are relatively few extreme exceptions. In pure breeding it is important for the breeders to pay special attention to the preservation of genetic diversity, since a blood supply that is too narrow can also lead to not inconsiderable health problems. The best-known breeds with closed stud books are the Arabian thoroughbred horse (breed abbreviation "ox"), the English thoroughbred horse (breed abbreviation "xx") and the Icelandic horse . Some warmblood breeds such as the Holsteiner or the Trakehner also have almost closed stud books.

The improvement of a breed by breeding in a few individuals with desired traits is standard in horse breeding. For example, Arabs, thoroughbreds or Trakehner were used for refinement in many races . In contrast to crossbreeding, the refiner is specifically selected based on the desired properties.

When crossing, as for example with the Aegidienberger , an attempt is made to combine the characteristics of two breeds. The two original breeds are crossed again and again during the course of breeding to freshen up blood and strengthen the direction of breeding. Of course, more than two breeds can also form the starting point of the crossing, but the starting breeds should then already show a high degree of similarity in order to avoid the new breeding line from splitting up too much. An example of a large-scale crossbreeding “program” in the Renaissance and Baroque periods was the crossing of indigenous Central and Northern European breeds with Spanish horses (whereby mostly individual stallions from Spain, still known by name today, were used, so that one also speaks of refinement could), which led to the development of Lipizzaners , Kladrubers , Frederiksborgern , Frisians , Neapolitans and probably also the Connemara pony .

Breeding in the 21st century 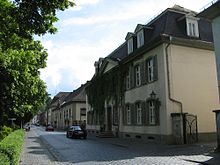 Breeding in the 21st century is predominantly private, as state institutions can no longer bear the costs of pure conservation. There are still state studs , but the majority of the breeding animals are in the hands of small private breeders who have dedicated themselves to a wide variety of horse breeds. The basis for horse breeding in Germany is the Animal Breeding Act and the Ordinance on Performance Testing and Determination of Breeding Values in Horses.

Like other animals, horses are no longer only reproduced naturally ( natural jumping , copulation ), i.e. by bringing together a stallion and a mare. Artificial insemination and embryo transfer have also found their way here. For artificial insemination, sperm is first required, which is obtained by insemination . The sperm is diluted, portioned and frozen . This development is viewed critically in some cases. The advantages of artificial insemination certainly include the lower stress on the animals, since transport routes are eliminated and the risks of injuries and disease transmission are minimized, as well as the cost advantages for the breeder. Disadvantages are, on the one hand, the poor pregnancy results in mares, and on the other hand, there is a long-term risk of genetic impoverishment, as certain aggressively marketed “fashion stallions” can now pass on their genetic makeup more than average.

In the case of horses, the generation gap is relatively long. Mares rarely have more than six offspring, which means that they cannot pass on their traits to the same extent as stallions who can establish an entire breed line . The best example of this is the breeding of the English thoroughbred , in which 95% of the pedigree animals go back to a stallion.

The ancestry of a horse is usually characterized by three stallions from the pedigree , see the following graphic:

The breeding name can differ from the usual name of the horse. For example, the Holstein stallion Caspar (breeding name, first letter C from his father Cassini I ) competed under the name Eurocommerce Berlin . Once a breed name has been given, it cannot be changed.

In order to show the importance of the mother mares, all mare lines were numbered and named accordingly, especially in Holstein breeding. In the Trakehner breed, the name of the horse begins with the first letter of the mother, and the mare lines are divided into families, each of which bears the name of the line founder and is systematized by a family key, e.g. B. Family of flashlights 018B1 .