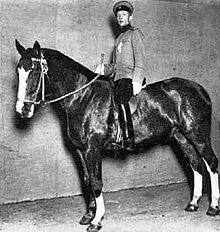 Seunig was the son of an Austro-Hungarian officer and grew up on the family seat of Stroblhof Palace near Laibach (now Ljubljana , Slovenia). He went through elementary school and the humanistic high school. At the age of twelve he received his first riding lessons from his father. After graduating from high school, he moved to the Theresian Military Academy in Wiener Neustadt, where he was trained in riding and left as a lieutenant in the 1st Landwehr Uhlan Regiment. From 1913 to 1914 he was posted to the military riding instructor institute in Vienna.

From 1914 to 1918 Seunig's regiment was in action in the First World War . Seunig's last rank there was Rittmeister . In 1921 and 1922 Seunig was a guest at the French cavalry school in Saumur and then took over the post of stables at the royal court in Belgrade from 1922 to 1932. He visited Germany every year and took part in numerous international tournaments. In 1924 Seunig was a member of the Yugoslav team at the Olympic Games in Paris and was 24th in dressage . In 1926 and 1927 he was a student at the Spanish Riding School in Vienna and over the years completed study trips to England, Sweden, Italy and Finland. At his own request, he left the Yugoslav royal court in 1932 and ran a riding stable in Laibach (Ljubljana) from 1933 to 1941. He also published numerous articles in German journals. In 1931 he married his wife Marion and had two sons with her, to whom he later dedicated his main work “From the paddock to the caper”. This book set the trend for an entire generation of equestrians and its title became a catchphrase.

Seunig served as an officer during World War II. After the end of the war (the family seat at Stroblhof Castle was destroyed), the family emigrated via Austria to Bavaria, where they settled in Ansbach . Seunig published several books in the field of riding.

In 1961 the family moved to Munich and Seunig trained his last horse there, the Lipizzaner mare Melodie, up to high school. His teaching activity often took him abroad, he taught in Hawaii and Canada, Switzerland, the USA and other countries. Further books were created, of which "Equestrian Thoughts" and "Masters of the Art of Riding and Their Ways" are mentioned as examples. He taught free of charge until his death on Christmas Day 1976.