Wolfgang Overath (born September 29, 1943 in Siegburg ) is a former German soccer player . From June 2004 to November 2011 he was President of 1. FC Köln . His greatest success in his playing days was the 1974 world championship . 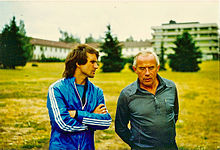 Wolfgang Overath in conversation with Hennes Weisweiler , in preparation for the 1976/77 season at the Grünberg sports school

Overath played in the group of students from the Middle Rhine, which was supervised by the later DFB coach Karl-Heinz Heddergott . In April and May 1959 Overath played for Germany in the traditional school international game against England. In London the DFB-Elf lost 2-0 goals, in Essen a month later they took revenge with a 4-0 victory. Dettmar Cramer was responsible for selecting German students .

On June 18, 1960, the talented playmaker from Siegburg made his debut in the German youth team at the international match in Vejle against Denmark. In 1961 and 1962 he took part with the DFB youth in two UEFA junior tournaments in Portugal and Romania. Under the leadership of DFB coach Helmut Schön , the DFB youth reached third place in the tournament in Portugal in 1961.

Overath moved to 1. FC Köln in 1962 against specific offers from Bayer Leverkusen, Kickers Offenbach, Borussia Dortmund and Viktoria Köln . He was blocked for one year due to the then automatic ban on transferring an amateur to a contract players' club.

On the day the new Bundesliga started on August 24, 1963, the new half-striker from Siegburg was in the formation of 1. FC Köln, which made a guest appearance at 1. FC Saarbrücken and won the opening game with 2-0 goals. Overath scored in the 22nd minute in front of 35,000 spectators the 1-0 lead for the "billy goat-Elf" supervised by coach Georg Knöpfle . The Cologne attack consisted of Karl-Heinz Thielen , Hans Schäfer , Christian Müller , Overath and Heinz Hornig . Together with Hans Sturm , the young player played all 30 rounds and won the first Bundesliga championship with a six point lead.

One month after the start of the Bundesliga, on September 28, 1963, the enthusiastic technician made his debut in the national soccer team under national coach Sepp Herberger . In addition to the other debutants Reinhard Libuda and Werner Krämer , the Cologne player came on as a half-left substitute for Friedhelm Konietzka in the 69th minute .

Between 1963 and 1974 Overath had 81 appearances in the national team , for which he scored 17 goals. He took part in three soccer world championships : in 1966 in England the midfield director was runner-up with the German eleven (2: 4 afterwards against England) and in 1970 in Mexico third behind Brazil and Italy . He scored the goal in the game for third place in a 1-0 win against Uruguay. His greatest success was winning the world championship title in 1974 in the Federal Republic of Germany, in which Overath played in all games of the German national team from the start and scored two goals.

After finishing his playing career in 1977, Wolfgang Overath worked as a representative for adidas . From 1994 to 1998 he was a member of the board of directors of 1. FC Köln.

After repeated calls for Overath as club president were loud during the sporting downturn of the FC in the 1990s and at the beginning of the 2000s, Overath declared in spring 2004, when another relegation to the second Bundesliga became foreseeable, his willingness, together with a to be available for the FC chairmanship of their own board team. He received the support of the Board of Directors. On May 7, 2004, the acting chairman Albert Caspers announced his immediate resignation, clearing the way for an extraordinary general meeting.

On June 14, 2004 Overath was elected President of 1. FC Köln. With him, his confidants Jürgen Glowacz and Friedrich Neukirch were elected vice-presidents. Glowacz, a former teammate of Overath, advised Overath in the sporting area, Neukirch, managing director of Klosterfrau Deutschland GmbH , in economic matters. Furthermore, the previous Vice President Bernd Steegmann, who had not been ready to resign, was a member of the Executive Board for the remainder of his term of office. Overath's goals were immediate resurgence and entry into European competitions within four years.

Overath's tenure was a time of changeable sporting success for the FC, a strong increase in economic activity on the income as well as on the expenditure side and frequent personnel changes in the sporting area.

On the day of his election, he announced the dismissal of coach Marcel Koller in favor of Huub Stevens , with whom the short-term goal of direct promotion was easily achieved. Other head coaches during Overath's tenure were Uwe Rapolder , Hanspeter Latour , Christoph Daum , Zvonimir Soldo , Frank Schaefer and Ståle Solbakken . After Andreas Rettig left in December 2005, Michael Meier became the club's sporting manager.

After the immediate relegation in the 2005/06 season, the promotion to the Bundesliga succeeded only two years later, in which 1. FC Cologne was able to hold for the rest of Overath's tenure.

In economic matters, Overath was largely dependent on advisers from the club and his personal environment. While he succeeded in significantly increasing fan interest during his tenure (the number of members was almost doubled), he was exposed to widespread criticism in terms of strategy, perspective and the financial situation in the club. Although the club had reported negative equity at group level in the last financial years of the Overath era after repeated millions of losses, Overath rejected the allegation of overindebtedness.

The criticism had consequences for the first time at the general meeting in 2010 when the board was not exonerated. An opposition had formed within the membership, which was organized primarily in the “FC: Reloaded” campaign. The club's management resolutely fought this group, which wanted to force an extraordinary general meeting. Overath increasingly held back from the operational management, which passed more to managing director Horstmann. Soon after the general meeting, manager Michael Meier, who had worked closely with Overath, was fired and replaced by Volker Finke .

At the beginning of the (regular) general meeting on November 13, 2011, Overath surprisingly announced the resignation of the entire association's board with immediate effect. His immediate, provisional successor was the newly elected Chairman of the Board of Directors Werner Wolf , who led the search for a new club president, which resulted in the election of Werner Spinner in April 2012 .

Wolfgang Overath is the youngest of eight children. He grew up in modest circumstances, attended high school, which he left in favor of a career as a footballer before graduating from high school. Wolfgang Overath is married, and with his wife Karin he has two biological sons and a Brazilian adopted daughter.

The Brazilian professional footballer Overath Breitner da Silva Medina is named after him and Paul Breitner .

Overath has long been committed to helping people in need and founded a fund for those in need that bears his name. Every year he invites around 150 homeless people and other poor people to a Christmas party, at which there is also a gift for everyone. About his motivation, he said in an interview with the Kölner Kirchenzeitung: "You have to try to share the happiness you have in life with others and to help others."

Since 2014, Overath has shown social commitment as the best-known athlete in the “Movement Against Cancer” campaign, which the German Olympic Sports Confederation (DOSB), the German Cancer Aid and the German Sport University Cologne started together for the first time. Overath became honorary ambassador of the nationwide prevention campaign, which includes nationwide poster campaigns and events in the various sports clubs in Germany.

Top scorer of the DFB Cup