In 1860, Nikolai Rubinstein and Wasilij Kologriwow founded the Moscow Department of the Russian Music Society ( Russkoe muzykal'noe obščestvo , RMO) with the aim of opening a conservatory for the training of professional musicians. For this purpose, he also organized concerts and collected donations. Classes initially took place in Rubinstein's private apartment. At first, lessons were given in music theory and choral singing, later the subjects piano, violin, cello, trumpet, flute and solo singing were added. In 1864 there were already 200 pupils being taught. From these music classes, the Conservatory was founded in 1866 as the Moscow Imperial Conservatory with the support of Prince Nikolai Petrovich Trubetskoi . Nikolai Rubinstein was in charge of the company until his death in 1881. Pyotr Ilyich Tchaikovsky taught there as early as 1866 and was a lecturer in theory and harmony until around 1878 . In his honor the conservatory was named Tchaikovsky Conservatory in 1940 .

In 1871 the building on Bolshaya Nikitskaya Street , built in the 18th century for Princess Katharina Romanovna Dashkova , was rented and purchased in 1878 for 185,000 rubles .

Major international music competitions such as the Tchaikovsky Competition as well as festivals and concerts take place in the premises of the Conservatory .

The building originally dates from the 18th century and was built for Princess Katharina Romanovna Daschkowa by the architect Vasily I. Baschenow . It was leased from the Conservatory in 1871 and acquired in 1878. Under the directorate of Vasily Safonow , extensive renovations and extensions took place between 1893 and 1901 according to plans by the architect WP Sagorski. The three-building complex has several halls, including the Great Hall (opened in 1901), the Small Hall (opened in 1898), the Conference Hall, the Rachmaninov Hall, and the Myaskovsky Concert Hall . The Nikolai Grigoryevich Rubinstein Museum is also housed in the buildings. 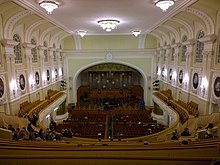 Large hall, view of the stage

Large hall, view of the gallery

The hall is one of the acoustically best concert halls in the world and can accommodate 1,800 spectators. There is room for 130 orchestral musicians and 250 singers at the same time on the stage. The acoustic peculiarity of the hall is based on ceramic hollow bodies that are inserted into the vaulted ceiling.

After extensive renovations and extensions to the building, the hall was opened on April 20, 1901 with a performance of the opera Ruslan and Lyudmila by Michail Glinka .

Concerts and festivals as well as important international music competitions such as the Tchaikovsky Competition take place in this hall , orchestras from all over the world and internationally renowned artists perform here.

The small hall offers space for 436 spectators and was opened on November 6, 1898. At the opening, on the occasion of the fifth anniversary of the death of Peter Tchaikovsky, his works were performed. A bas-relief portrait of Nikolai Rubinstein is placed above the arch above the stage in the small hall . The walls of the hall are decorated with stucco pictures of musical instruments.

→ see: Graduates of the Moscow Conservatory