from Wikipedia, the free encyclopedia
This is the spotted version , flagged on June 15, 2020 . There is 1 pending change that has yet to be viewed.

Andrei Wladimirowitsch Gavrilov ( Russian Андрей Владимирович Гаврилов , scientific transliteration Andrej Vladimirovič Gavrilov ; born September 21, 1955 in Moscow ) is a Russian pianist . After winning the Tchaikovsky competition in 1974, Gavrilov's international career was interrupted twice: from 1979 to 1984 he was forced into isolation by the Soviet regime, and from 1993 to 2001 he withdrew completely due to a life crisis. Gawrilow has lived in Switzerland since 2001 and is continuing his career there.

Gavrilov was born into a multinational family of artists. His father was Vladimir Gavrilow (born May 30, 1923 in Moscow, † December 4, 1974 in Tver under unexplained circumstances), one of the leading Russian painters of the mid-20th century, through whom Gavrilow also has German ancestors. His mother was the Armenian pianist Assanetta Egeserian (born December 20, 1925 in Nowy Afon , † November 29, 2006 in Lucerne ), who had studied with Heinrich Neuhaus and gave Gawrilow his first piano lessons at the age of just under 3 years.

In 1961 he was accepted at the Moscow Central Music School , where he was taught by Tatjana Kestner, who had studied with Alexander Goldenweiser . He finished his training with another Neuhaus student, Lev Naumow , at the Moscow Conservatory . At the age of 18 and after a semester at the conservatory, he won the Tchaikovsky Competition in 1974 and gained international fame when he stood in for Svyatoslav Richter at the Salzburg Festival in the same year , who had been his protector since Gavrilov's youth. After the first part, before the break, he had to play five encores. After the second part, the first row of the audience hugged him, and the audience carried the young Russian on their shoulders to the artist's room.

Until 1979 Gavrilow performed in all important music centers in East and West with up to 90 concerts a year and continued his studies at the Conservatory.

In 1979, at the peak of Gavrilov's career, Herbert von Karajan , who had heard him with the First Tchaikovsky Concerto in Berlin , offered recordings of all Rachmaninov concerts, although Karajan rarely conducted Rachmaninoff concerts. In December 1979, sound recordings with the Berlin Philharmonic for the Second Piano Concerto were scheduled in Berlin , for whose rehearsals Gavrilov did not appear. It turned out that - due to critical remarks about the Soviet regime - by the then KGB chief and later short-term Central Committee secretary Yuri Andropov, in agreement with Leonid Brezhnev, his passport and flight tickets had been withdrawn and his telephone line cut off. Gavrilov was later placed under house arrest, and at times he was forcibly committed to psychiatric hospitals. Militiamen showed Gavrilov official instructions that a fatal accident by Gavrilov would not be unwelcome to the authorities.

It was only through Mikhail Gorbachev's mediation that Gavrilov was rehabilitated in 1984 and was the first Soviet citizen to receive a so-called “free passport” so that he could perform again in the West and make sound recordings without having to apply for political asylum abroad. Gavrilov later stated in interviews: "I was the first free, new Russian person. I am just as proud of that as of my artistic successes!" He subsequently lived in London and, from 1989, in Bad Camberg near Wiesbaden and also took on German citizenship .

Gavrilow played under conductors such as Claudio Abbado , Riccardo Muti and Evgeni Swetlanow . He has given concerts with the most important orchestras in the world in Carnegie Hall New York, the Royal Festival Hall and Queen-Elisabeth-Hall in London as well as many other renowned venues. In 1989 he was awarded the prize of the private Italian Accademia Musicale Chigiana. 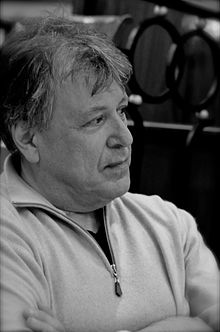 In 1993 Andrei Gavrilow got into a serious life crisis. According to an interview with the Guardian , he saw himself at the height of his career, materially well off, but not as a free, original and idealistic artist outside the music industry.

In the middle of a live broadcast concert in Vienna, Gawrilow simply walked off the stage and canceled all concerts and studio recordings. According to his own statements, he sought dialogue with God for nine years, pursued religious and philosophical studies, dealt with the intentions of the composers in the works and fundamentally revised his piano technique. His stations were Palestine and Israel, even the Fiji Islands in the South Pacific.

In 2001 Gavrilov reappeared. He found his new home in Switzerland, first lived in Lucerne and began to perform again in the 2001/2 season. Since August 2008 he has lived with his second wife, a young Japanese pianist, and his son in the canton of Zurich .

In September 2009 Andrei Gavrilow started a sensational tour through the Russian-speaking countries, which began in the Siberian city of Tyumen and led via Yekaterinburg in the Urals to Moscow and Saint Petersburg . In November Gavrilov played in Ukraine and then returned to Moscow in December via the Siberian cities of Novosibirsk and Krasnoyarsk .

The dramatic biography of Gavrilov is soon to be filmed in Hollywood.

Gavrilov is a pianist of extraordinary virtuosity and strength. Already in 1974 Melodija recorded the 1st Tchaikovsky concert from the prize-winners' concert of the Tchaikovsky Competition as well as a live solo program. In 1976 a studio recording of the 3rd Rachmaninoff concert followed . From 1977 to 1989 he worked in the recording studio exclusively for EMI . The legendary recording of the Chopin Etudes and many other works, especially by Chopin, Scriabin , Prokofiev , Rachmaninoff and JS Bach, dates from this period .

From 1991 to 1993 he recorded for Deutsche Grammophon , where Gawrilow, who keeps returning to his core repertoire, a. a. duplicated some of the works already recorded for EMI. A number of projects with many Gawrilow novelties were no longer realized due to the withdrawal in 1993, such as Bach's English Suites , the complete Beethoven piano concertos, the Choral Fantasy and the Diabelli Variations , as well as other vague plans with works by Franz Liszt ( Études d'exécution transcendante , Paganini-Etudes), Ravel's complete works for piano solo and with orchestra as well as the piano concertos by Grieg and Schumann .

The release of a series of new DVD recordings is currently planned. A first set will include five DVDs with works by Chopin and Bach, including his legendary Goldberg Variations, as well as three DVDs with his explanations. A second such DVD set works by Schumann and Prokofiev. In 2011 Gavrilov's autobiography Tschainik, Fira and Andrei was published in Russian.

Commons : Andrei Wladimirowitsch Gavrilow  - collection of pictures, videos and audio files
First winner of the piano at the Tchaikovsky Competition