Neither individual references nor literature references available. Web link with biographical data does not work. 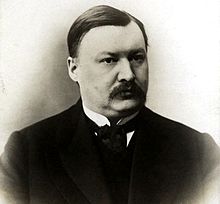 Alexander Glasunov came from a well-to-do family and began to occupy himself with music at a very early age. His astonishing musical memory and excellent hearing were particularly noticeable. In 1880, on the recommendation of Mili Balakirew , Glasunov began private studies with Nikolai Rimsky-Korsakov , who was impressed by the talent of his pupil.

The first performance of Glasunov's Symphony No. 1 in 1882 was the breakthrough for the young composer. Under the leadership of Rimsky-Korsakov, he completed Borodin's opera Prince Igor . He also became acquainted with the patron Mitrofan Beljajew , who promoted him in the following years.

After Glasunow had advanced to an internationally recognized personality in the 1890s, he accepted a professorship for instrumentation at the St. Petersburg Conservatory in 1899 . In 1905 he took over the management of this institute, which he held until 1930. In February 1910 he recorded six piano pieces for the Welte-Mignon reproduction piano . During this time, his compositional productivity decreased significantly due to the time invested and his unique commitment to the needs of the conservatory. He discovered many talents and worked tirelessly for the students. In 1928 Glasunow traveled to Vienna , where he was a member of the jury at the International Schubert Competition . His poor health did not allow him to return, so he settled in Paris . Here he stayed until his death.

Tomb in the Tikhvin cemetery at the Alexander Nevsky Monastery

In 1972 his remains were transferred to Leningrad (now Saint Petersburg again) and buried in the Alexander Nevsky Monastery .

The river cruise ship Kompozitor Glazunov was named after him in 1956. Since 1987, this has also been the case for the Glasunow Glacier on Alexander I Island in Antarctica.

Glasunow combines national Russian influences with style elements of Pyotr Tchaikovsky in his music . In his work, tendencies towards distinct folk song-like themes, orientalizing harmony, exoticisms and metrical freedoms can be identified. On the other hand, in contrast to the efforts of the Mighty Heap , Glasunov's music stands out as a great technical mastery and a sovereign mastery of the compositional technique: Glasunov was a brilliant orchestrator, a sophisticated counterpoint and a master of design.

All in all, Glasunov's music has an extremely positive mood, as well as a tendency towards pathos and heroic gestures. Glasunov never went through a stylistic development in the true sense of the word; the compositions of the early 1880s hardly differ from those of the 1930s. It can only be said that the national Russian elements predominated in his style at first. Around 1890 Glasunow suffered from a kind of "crisis" which was probably triggered by the impression that Wagner's Ring des Nibelungen was being performed in 1889. Many of his probably greatest works were created in the 1890s and at the beginning of the 20th century , while his output declined noticeably from around 1910.

Due to his compositional achievements and his pedagogical activities, Glasunow can be regarded as an important figure in Russian music history. Glasunow also emerged as a conductor and pianist, whereby interpretations of his own works are of particular importance.