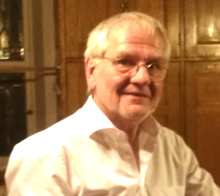 Reinhard Goebel (born July 31, 1952 in Siegen ) is a German violinist and conductor and professor of historical performance practice at the Mozarteum Salzburg.

At the age of 12 he received Reinhard Goebel's first violin lessons. After graduating from high school, he first studied at the Musikhochschule in Cologne with Franzjosef Maier , who, as director of the Collegium Aureum , had familiarized himself with historical performance practice at an early age . He later studied with Saschko Gawriloff at the Folkwang School in Essen , followed by courses on the baroque violin with Marie Leonhardt and Eduard Melkus . Reinhard Goebel then studied musicology at the University of Cologne . This is where the foundation for his extensive knowledge of the repertoire was laid.

In 1973 Goebel founded his ensemble Musica Antiqua Köln , which was dedicated to baroque music . His “Cologne School” has been a household name for budding baroque violinists for many years. In 1990 he had to interrupt his career because of a left hand paralysis. He then decided to relearn his instrument on the other side of the body. In 2006, focal dystonia in his left hand forced him to give up playing the violin for good. Since then he has devoted himself to conducting orchestras, also with modern instruments, in order to familiarize them with the sound world of the 18th century.

His ensemble Musica Antiqua Köln is known to the general public. Since it was founded in 1973, Goebel and several generations of members have immortalized numerous works from the 17th and 18th centuries on sound carriers. Very early on he received an exclusive contract with the archive production of the Deutsche Grammophon Gesellschaft . Here he played widely acclaimed interpretations of the entire orchestral and chamber music with violin by Johann Sebastian Bach and the Rosary Sonatas by Heinrich Ignaz Franz Biber as well as numerous works by Georg Philipp Telemann , Johann David Heinichen , Johann Rosenmüller , Johann Pachelbel , Francesco Maria Veracini and many others. This also includes many first recordings by forgotten composers.

As a conductor of other ensembles: