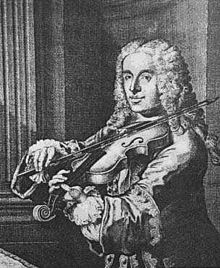 Veracini was the son of a pharmacist and learned to play the violin from his uncle Antonio Veracini , with whom he often gave concerts. In 1711 Veracini composed a violin concerto accompanied by oboes, trumpets and strings, which was performed at the coronation festival in honor of Emperor Charles VI. was performed in the Frari Church . The young Giuseppe Tartini heard Veracini's playing for the first time in 1712 and was so impressed that he withdrew from active musical life for a certain time in order to devote himself to improving his own violin playing, in particular to clean bowing, before performing again in public .

In 1714 Veracini lived in London for a while, where he performed violin solos as interludes in various operas at the King's Theater , where he may have met Georg Friedrich Handel, among others . In 1715 he spent some time in Düsseldorf in the service of Elector Johann Wilhelm and returned to Venice in 1716. This is where his six orchestral lavishly designed and boldly harmonious overtures were written , which once again increased his reputation as a composer, and here he dedicated a violin sonata opus to Crown Prince Friedrich August , son of the King of Saxony. In 1721 he dedicated another sonata opus to the prince. The prince, who himself was an excellent music connoisseur, brought Veracini to his residence in Dresden so that he performed chamber music, made music with him and took care of the employment of Italian singers for the Dresden Opera House . In the course of time, a dispute broke out over the sinfully expensive Italian operas with the composer Johann David Heinichen and the castrato Senesino , in which Veracini jumped out of the window on the second floor in anger and broke his hip and leg, which did not heal adequately which is why he has been limping ever since.

Back in his hometown of Florence in 1723 he played church music and composed an oratorio ; During this time he made a bad name for himself and earned the nickname of a "capo pazzo" (tangled head). Veracini, who is considered eccentric and haughty, called the two best of his ten violins by Jakob Stainer "Petrus & Paul".

In 1733 he moved back to London to perform in many concerts there. Like many of his famous contemporaries, he wrote several operas there, including Adriano in Siria , La clemenza di Tito and Rosalinda in 1738, and the oratorio L'errore di Salomono in 1744 . He left the city in 1744, whose musical life was now dominated by Handel's music.

On the trip he was the victim of a shipwreck in the English Channel , which he miraculously survived, two of his violins were lost. He returned to Florence, where he became associate Kapellmeister at several churches, where he concentrated entirely on church music. In the last years of his life he made many appearances as a violinist and conductor.

While Veracini followed the taste of the times in his violin concertos, his musical historical legacy lies primarily in the virtuoso sonatas of op.2.

All operas were premiered in London's King's Theater .